Canada is 3-0 in the Olympics so far but nobody is happy about it.

Team Canada won their final preliminary round game against Finland on Sunday, which clinches top spot in their pool and a bye to the quarterfinals. It didn’t clinch the top seed in the tournament though, because they won their game in overtime (in the Olympics you get 3 points for a regulation win and only 2 points for an overtime or shootout win).

It’s a little unclear whether or not this will benefit Team Canada. Their path to the gold medal game is likely to include matches against Switzerland and the USA. Had they won in regulation, their path would have included an easier quarterfinal game against Austria or Slovenia and then Russia in the semis.

My biggest worry with Team Canada all along is that they won’t be battle-tested once they get to single elimination games. They were in the easiest pool, and playing Austria or Slovenia in the quarterfinal wouldn’t have posed much of a test either. The Swiss are capable of beating Canada, but if they don’t then Canada will be better off for playing them (it should be noted that Switzerland has to beat Latvia first in order to play Canada).

I was surprised by the level of venom on Twitter from Canucks fans that were angry about Carey Price being given the job of being Canada’s number one goalie over Roberto Luongo. Luongo has been good this year but Price has been better. Sure, Luongo played well for Canada 4 years ago and has experience, but is that to suggest that Carey Price is sure to crumble under the pressure?

Let me state that I don’t have some kind of vendetta against Luongo. I have never been a “Luongo-basher” and I like to think I’m relatively unbiased with my opinions about him. I would love nothing better than for Luongo to win it for Canada once again. That said, I usually base my opinions about goalies based on their SV% while taking into account the type of defensive system the goalie plays behind (within reason, I prefer my goalies to have played in pressure games before). That said, my choice would have been Carey Price, but I would have been fine with Luongo too. It was a close call. 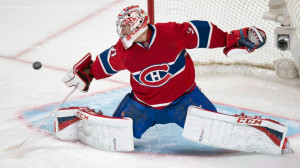 I’m fine with the argument that Luongo and Price’s numbers are close enough during the regular season and that the edge should be given to the guy with the experience, but lets not lose our minds here. Price is an excellent goalie in his own regard and we should give him some respect. To start blaming him for the only goal against like some did (it was a tipped shot in front that changed directions) is ludicrous.

The theory that there’s some kind of unwritten rule that Canada must choose the incumbent is particularly amusing to me. Martin Brodeur was named Canada’s #1 goalie in 2006, which was a no brainer. He was named Canada’s #1 goalie in 2010 too, based a little bit on reputation (as arguably the best goalie in the history of the game), but that turned out to be a mistake! Luongo was the hotter goalie in 2010 and in retrospect, should have been given the job in the first place.

The only rule when picking your team should be to pick the players who you think give you the best chance of winning. Whatever Marc Crawford (1998) or Pat Quinn (2002 & 2006) did when they coached the Olympic team should have nothing to do with what Mike Babcock decides to do in 2014.

The Chris Kunitz experiment isn’t working. They didn’t produce much against lowly Norway and Austria and now Mike Babcock doesn’t seem to want to play him with Sidney Crosby anymore (which was the whole reason for picking him in the first place). The reigning Art Ross Trophy winner was a healthy scratch on Sunday while Kunitz played in his spot, which makes me scratch my head.

It’s time to end the madness and scratch Kunitz for the medal rounds.

There is some chemistry building on Team Canada’s other line combos. The line of Duchene-Getzlaf-Perry has probably been their best so far. Benn-Tavares-Bergeron looked good in their first two games but was split-up to try to get Crosby going against Finland.

If I were Mike Babcock, I would keep the those two lines together and juggle the other two. I would try Martin St Louis (a playmaker) and Patrick Sharp (a goal scorer) with Crosby, leaving Jeff Carter and Rick Nash on Jonathan Toews’ line.

Something that I will look for in Canada’s next game is a return of Canada’s signature forecheck. Admittedly it’s harder to get a strong forecheck on Olympic-sized ice, but Finland seemed to find a way to do it. The USA-Russia game also seemed to have a lot of big bodychecks as well. Canada needs to put the pressure on opposing defencemen, which will lead to turnovers and lead to offense.