In celebration of the Just For Laughs tour, festival sponsor Capital One is looking to share the laughs with a lucky Vancity Buzz reader. To match the theme of this year’s tour, the “Laughing all the Way to the Bank”  prize pack includes a $100 gift certificate for a dinner for two at any of Glowbal Group’s establishments (including the newly opened The Fish Shack), Just For Laughs swag (JFL Gag DVD Volume 7&8 and Victor mascot animal) and a hilarious DVD featuring one of the tour’s comedians. 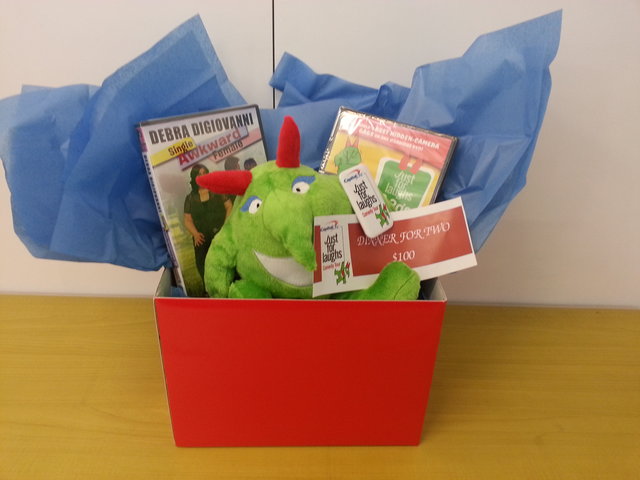 To find out want makes Canadians, and more specifically British Columbians laugh, Capital One commissioned Vision Critical/Angus Reid Public Opinion to conduct a survey to find out more about attitudes and behaviours when it come to funny online content. Here are some of their findings:

If you’d like to try your luck at another giveaway, be sure to visit Capital One’s Facebook page – Stand Up Stand Off – for your chance to win an LG entertainment bundle (valued at approximately $2,500). There will also be fun prizes and gift cards up for grabs throughout the contest (nine prize packs valued at approximately $125 – $145). Stand Up Stand Off kicks off October 24 and runs until November 14, 2012.

To enter to win the prize package:

Contest ends November 2, 2012. One winner will be drawn at random.

No purchase necessary. Open to Canadian residents (excluding Quebec) who have reached the age of majority in their province or territory. Enter the Just for Laughs Contest for your chance to win a Laughing All the Way to the Bank give away package worth approximately $125 CDN.  Prize packs include a $100 gift card to a local restaurant, a Just For Laughs Gag DVD and a DVD featuring one of the tour’s comedians and a Just for Laughs mascot plush toy.  Any part of the give away package may be substituted for one of equal or greater value.  To enter, re-tweet or like the Capitol One Facebook page. Contest opens October 30 (PST) and closes November 2, 2012 at 11:59 p.m. PST. Chances of winning depend on the number of eligible entries received. Skill-testing question required.