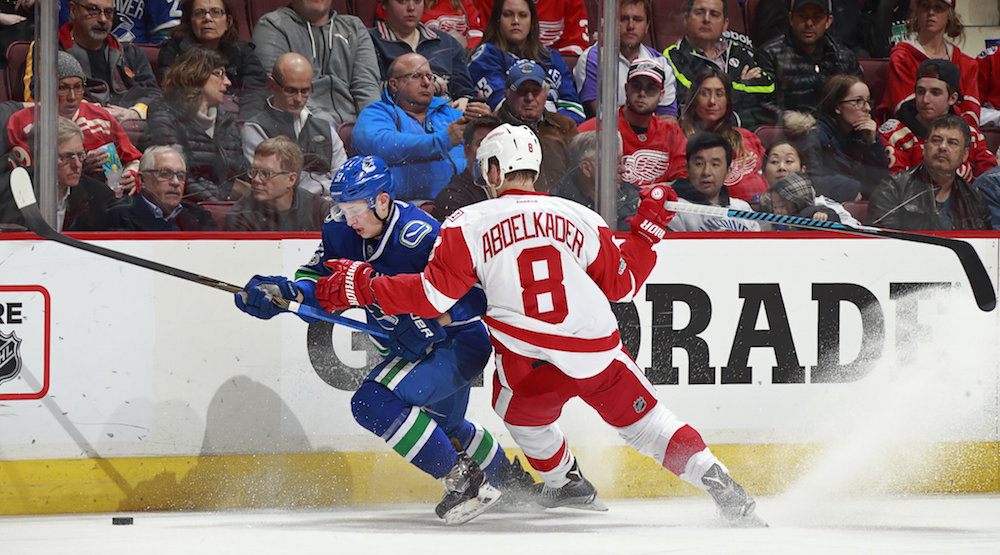 The only people who cared about what was happening on the ice at Rogers Arena tonight were the Larscheiders and maybe Ryan Miller. He looked pretty unhappy after the first period.

For hockey fans cheering for one of the worst teams in the NHL, it’s Christmas Eve. The night before the NHL’s trade deadline – a chance for sellers to cash in.

Monday’s Burrows trade made fans even more excited for the deadline, because it showed the Canucks are finally making things happen this year.

It also showed Benning was entirely capable of pulling off a half-decent trade.

So look, the Canucks lost 3-2 in overtime to Detroit Tuesday, but no one really cares.

They traded Jannik Hansen in the third period, and that’s pretty much all that matters.

1. How Hansen hijacked the game

When a game begins with these tweets, it’s hard to take your eyes off Twitter to watch what’s actually happening on the ice.

Hansen a late scratch for the Canucks

Benning and Linden aren’t in their customary box for the opening faceoff. Canucks pr says there’s nothing to announce yet.

Most Canucks fans were more intent on figuring out what was going on. Best guess award goes to this guy.

Stuff happened in the game – that’s what I’m told anyway, but then in the third period, the Hansen situation hit the fan.

Hearing that the San Jose Sharks are close to acquiring winger Jannik Hansen from the Vancouver Canucks.

VAN return on Hansen to SJ is expected to be Nikolay Goldobin and a conditional fourth-round pick.

The only thing left was to find out what that condition on the pick was.

If SJ wins the Cup, the conditional fourth round pick becomes a first-round pick for the Canucks. 4th round or 1st round, no in between.

Hell of a condition there, Sharks.

You couldn’t just go with make the Conference Finals, or even the Cup Finals?

Goldobin is very, very good. One of the most exciting players in the AHL the last two years. Great skater. Could become a top-6 forward.

Honestly, I’m thrilled with the Nikolay Goldobin fetch for Hansen. Great prospect. Ranked him a lot higher than he went in ’14 draft (27th)

@TSN1040 I think Goldobin has the ability to produce offense with speed and can be a weapon on the PP. Highly creative and quick

Hansen to Sportsnet after the game:

“Getting pulled from the lineup today, I knew [a trade] was getting really close … I didn’t get the word here until 20 minutes ago.”

“It’s definitely a sad time right now saying goodbye to a lot of friends I’ve been with for a long time.”

Canucks fans will miss you too, Honey Badger.

Here’s a shot of Miller after the first period, where the Canucks went down 2-0 and were pretty much outplayed.

Ideas what he might’ve been thinking?

@omarcanuck Why am I still here?

@omarcanuck “Is it too late to submit my 29 team trade list?”

“Calgary can’t be that bad, can it? At least it’s not Edmonton?” https://t.co/RLkRoXtfBw

Or maybe it was just this.

@omarcanuck “So is the Nintendo Switch a console or a handheld? Both?”

Sure would be nice to see the Canucks get something done for Miller on Wednesday, though.

With two trades in two days you can pretty much predict the afternoon radio hosts will be celebrating Jim Benning like he’s Stan Bowman for the next few days.

No doubt it’s a lot better than last year’s trade deadline performance, but that’s because they did absolutely nothing then, setting the team back drastically in the rebuild all fans want to see.

Jim Benning has awoken like a bear from a two-year hibernation.

Seriously though, took long enough to make some deals, Jimbo.

For most of this season, management still wasn’t there yet, instead choosing to sign this aging winger to a 6-year $6-million contract this summer, to try to stay competitive.

That guy scored 30 goals… how?

Realize that until the playoffs became a pipe dream a week and a half before the deadline, the Canucks hadn’t decided they were sellers.

Realize that management and more than half the media in this city has had the strange idea that Canucks fans wouldn’t be able to “stomach” a rebuild – instead preferring to try to remain competitive and squeak into the playoffs year after year.

Now, trading Burrows and Hansen – two of the biggest fan favourites in Vancouver – the city’s hockey fans are elated.

Benning met with Henrik and Daniel after the Burrows trade to go over new direction. Says twins are excited. #Canucks

The Canucks have had a “new direction” for what, a week?

Great that they finally got there, but this rebuild could’ve started a long time ago, and the team could’ve been well on it’s way back to respectability by now, instead of wasting years of the Sedins’ careers.

For the second straight game, the Sedins looked great the entire time, creating chances and skating well. They set up Granlund for a goal with a nice couple of passes in the second period.

And in the third period, Reid Boucher showed his offensive flair.

The goal showed he should’ve been in the lineup much sooner – especially when the team needed those goals in games that mattered.

Brandon Sutter was a minus-14 in shot attempt differential, playing with Jayson Megna and Joseph Labate. Don’t forget he was supposed to be a foundational player for this team.

@omarcanuck The foundation has holes.

5. How Burrows shot at three straight hat tricks was thwarted

Alex Burrows spoke with TSN 1040 earlier Tuesday and he told a funny story about a prank Darcy Hordichuk played on him after his back-to-back hat tricks in 2010.

“Hordi was a prankster back in the day, and he was a good friend of mine. One day after those back-to-back hat tricks I showed up at the rink and I go to my stick rack – I used the same stick to score those six goals – and my stick’s gone missing.

So I go out looking for it, I go all over the locker room, I ask trainers, they don’t know – then I go out on the ice and who do I see working out before practice was Darcy Hordichuk skating around and shooting pucks with my stick.

He said, ‘Well if you can do it, I can do it too. It’s probably only the flex and the curve, that’s probably all I need. I’m going to try your stick.’

So he gives it back but then I look at it, he had cut it probably three inches shorter so I couldn’t use it anymore.”

If you’re a regular SixPack reader, you know I wanted to see Burrows reunited with the Sedins all season.

During Hansen’s injury it really made no sense that guys like Megna, Sutter and Eriksson were all getting extended looks and failing miserably, while Burrows was just down the bench.

Speaking on TSN 1040 earlier Tuesday, Daniel Sedin was asked how he felt about not playing with Burrows despite all the success they’d enjoyed together earlier.

“We always knew that he could be put on our line and we’d have a good game.”

He was also asked if he thought Saturday’s game was the “last hurrah” for their line.

“I got asked that after the game and I said hopefully we can keep this going for the end of the season because I thought we had a good game – it felt like old times. Then the day after he got traded so it was disappointing.”

Still think they hadn’t been wanting to play with him all season long?

“He is the best guy. There is no question about it. I think Ottawa’s players are going to realize it too.

“When you’re his teammate and his friend, you realize what kind of guy he is. He is the ultimate team guy and family guy and father, so there is nothing more you can ask.”

Still not sure what kind of person Burrows is?

Here’s his answer on why he chose Ottawa.

“I have three young kids at home right now under the age of five. They all were born in Vancouver. My oldest is going to school in Vancouver.

Our nanny, our babysitter is in Vancouver, so there’ll be a lot of changes going from a city to another one. My wife loved Vancouver for so long and she’d like to live there all her life too …

For me, it’s a good spot. Ottawa’s got a lot of good pieces. It’s closer to home, it’s only an hour and half drive from my hometown – where my parents are from, so I’ll be able to spend more time with them.

The kids are going to be able to spend more time with their grandparents, see their cousins more often. We’ll be able to spend Christmas and the special holidays and their birthdays as a family, and that’s really important to me.”

Canucks fans knew what kind of person Burrows is. Hopefully, with his exposure in the east, the rest of the league will finally see it too.

If not, he’s always welcome back in Vancouver. It’ll always be his home.


Note: Thanks to Ryan Biech for always helping with the SixPack gifs, even when he’d rather be tweeting about trades.