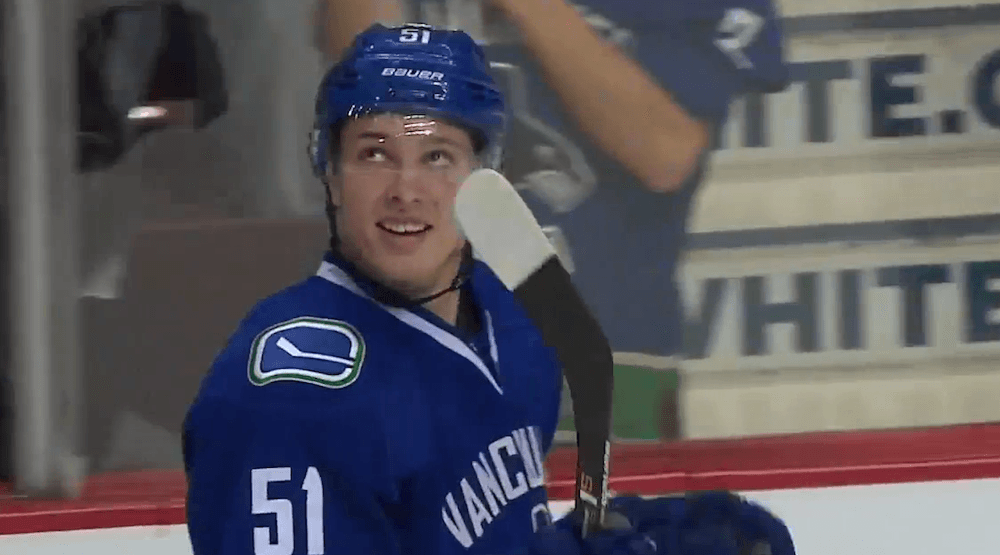 Welcome to opposite world. Vancouver scored five goals, the Wild and Canucks played an exciting game, and Kanye is completely sane.

Two of those three came true on Tuesday, and we’re left to sort through the mess.

So let’s start with this:

The only question I have is with a stats line like that, how was LASTNAME not first star?

I’m not the only one on board.

Anyway, Vancouver’s defence was the story – good and bad – and goaltending was the difference in the game.

I’ll get to that defence, but first that goaltending: even strength shot attempts were dead even at 46-46, and Minnesota edged Vancouver in total shots on net 42-35. Thanks to Minnesota playing their backup, Darcy Kuemper, Vancouver scored 5 goals on 35 shots and they got 2 points from the game.

In the end, Vancouver won 5-4 on a 17th minute Stech Curry point shot tipped in by Sven Baertschi.

Oh, and “Stech Curry” is becoming a thing.

@FarhanLaljiTSN @botchford Willie: “Is Curry real good? I don’t remember him playing for me in Medicine Hat.”

So… Vancouver is again within three wins away of first place in the worst division in the league.

Opposite day hasn’t finished yet, and this one’s crazier than Kanye being sane: Vancouver scored on 2/3 power plays.

And here’s Ben Hutton jumping on a rebound that should really not have been a rebound.

Notice that Stecher and Hutton were massively in on the two goals – two defencemen many people not named Willie would’ve put on the first power play unit to start the year.

True – it does feel as if the team’s young players have to “earn” their playing time and higher quality linemates. Perhaps Stecher and Hutton’s success on the power play shows that shouldn’t be a sticking point.

Back to those power play goals – Sutter made a lovely tip, and Hutton showed perseverance on the doorstep, but neither prove the man advantage has turned the corner.

With Edler and Tanev out with injury, the Canucks were without their top pairing. That meant good news and bad news.

The bad news: they played defence like a team without it’s top pairing.

The good news: Hutton and Stecher got the chance to play together on the power play, as you saw above.

Playing on the team’s new “top pairing”, Sbisa led Vancouver in playing time in the first period and he did this.

In the third period, with the Canucks up 4-2, Gudbranson took a point shot straight into a block, leading to this.

Later, Gudbranson actually tipped a shot into his own net with this horrible block attempt.

Mistakes like those stick in your mind and they’re hard to shake, but in the name of fairness I should mention that the Gudbranson-Hutton pair was statistically Vancouver’s best, as they were plus-7 and plus-8 in shot attempt differential.

Also in the name of fairness – Sbisa was a minus-5 despite 71% offensive zone starts.

Here’s what Valky said about Horvat during the second intermission:

“To me he’s their best player…

Henrik Sedin’s always been their best centre. To me he’s a better center than Henrik right now. He plays at both ends of the ice, he takes all the big faceoffs and he’s putting points up.”

Well, Horvat took 21 faceoffs against Minnesota (and went 13-8). Next highest was Brandon Sutter’s 12.

Earlier Tuesday, Dimitri Filipovic wrote an article on which players are driving offence. In it, he posted this chart: 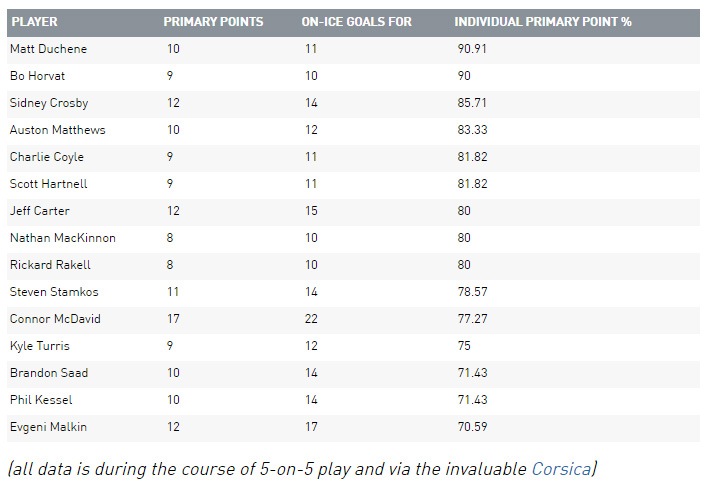 What the numbers mean is Duchene has been on the ice for 11 goals, and out of those 11 goals, he either scored or had the primary assist on 10 of them – meaning the offence flows through him a large majority of the time.

The crazy thing about the chart is that Bo Horvat is second on the list.

Now, let’s not get carried away and believe this means he’s better than Sidney Crosby, or even one of the league’s elite scorers. It’s still early in the season, and Vancouver doesn’t spread its scoring around like (or score nearly as much as) the teams of many other players on the list.

Still, it shows that Horvat has been driving offence so far.

This is amazing when you consider Willie D started him on the fourth line this season. Also, whenever the coach has been asked if Horvat should be used in more offensive positions, he’s said Horvat generates offence from defence.

Fact is, Horvat’s one of Vancouver’s best offensive threats – maybe even better than the Sedins right now – and the team should’ve been using him in that role from the start of the season.

With Baertschi, Eriksson, Sutter and Horvat all scoring again, here’s what their goal scoring totals would be after 82 games if they continue scoring at their current rates:

“Maybe you guys can be the torch bearers for this – The talk on the weekend about Evander kane and Jake Virtanen and all that – at this point it’s nonsense and it’s an old story, but it was brought back up and now it’s turning into a distraction.

I have it on good authority that that’s not anything that needs any lights put back on it.

… It’s just, I don’t know, it’s one of those stories that I thought had crept up, and then it was dealt with and then it creeps up again and all of a sudden it becomes this big talking point of potential and it’s not.”

Judging from the tone of that last sentence, Tomlinson probably won’t be happy that Friedman doubled down on the Buffalo-looking-at-Virtanen stuff on Tuesday in 30 Thoughts:

17. I’m not sure what it all means, but Buffalo’s been watching a lot of AHL Utica. (One game was against the Sabres’ own club, Rochester.) I’m assuming that’s Jake Virtanen.

Hey, it sounded like a good idea. Two sons facing each other on the ice, parents pitted against each other as each cheered for their favourite child. Imagine the emotions when they touched the puck? What if they got hit? What if one had to take a penalty shot to win the game??

Still, you’d expect the parents would be on the edges of their seats for this.

Instead, every time the producer went to the Grandlundfolks cam, this was their look:

Markus took a penalty, Mikael danced in the offensive end, Markus nearly scored… yet they looked like they were watching a documentary on making soy sauce.

The boy sitting in front with the “Vessa & Minna Granlund” banner sticking out of his ear is having more fun than them, for God’s sake.

Moving on, to send you off, here’s Burr doing something that was strangely reminiscent of his biggest goal as a Canuck.

Note: Thanks to Ryan Biech for the amazing gifs in this post