Having lost their last two, the Vancouver Canucks are in dire need of a win to stay in the thick of the wild card race.

It won’t be easy.

It rarely is for the Canucks, but especially not tonight against the top team in the Western Conference, Bruce Boudreau’s Minnesota Wild.

Jannik Hansen was activated from injured reserve yesterday and appears to be in the lineup against the Wild tonight.

Hansen is back, confirms coach Desjardins. "I expect him to take a regular shift and take time on the penalty kill."

He was lined-up on the right side with Brandon Sutter and Markus Granlund at Friday’s practice, bumping Jayson Megna out of the lineup.

After scoring his first goal as a Canuck last game, Philip Larsen slots in on the bottom pairing again tonight.

Larsen had a long leash from Willie after not showing much early in the season, so scoring that goal could secure his spot in the lineup for the rest of the season.

I’m only half kidding with that. After all, he did start the season ahead of Nikita Tryamkin on Willie’s depth chart.

Hansen returns on a line with Sutter and Granlund, which should help spread the scoring.

“It’s been a long wait and a frustrating season,” Hansen said at practice on Saturday. “I’m hoping that’s behind me and I’m looking forward to finishing the year strong.”

You have to think though, it’s only a matter of time before he gets a shot back up with the Sedin twins.

Loui Eriksson has been alright with the twins. They generate good possession numbers and control the play for the most part at even strength.

The problem? The puck still isn’t going in enough for the top line.

Daniel only has five points in 2017, Eriksson has just three. That’s not even close to enough production for a team with playoff aspirations.

Gone are the days where the Sedins could play with anybody and still produce. Oddly enough, the Sedins need Hansen far more than Hansen needs the Sedins.

2. Boudreau at it again

You can’t help but tip your cap to a guy like Bruce Boudreau. Just look at his coaching record. 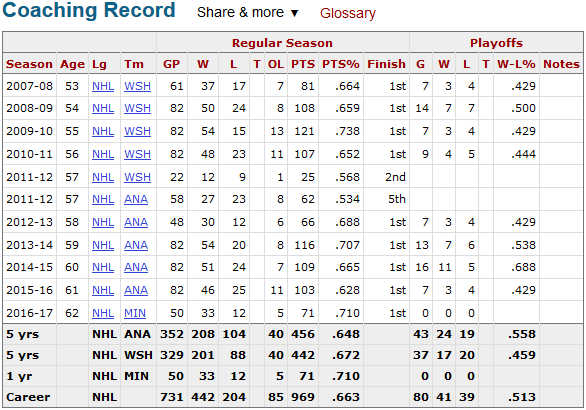 Every time he’s coached the same team for a whole season, that team has won the division.

Now with his third team, Boudreau is doing it once again with the Wild.

The Wild have only won a division title one other time in their history, back in 2007-08 when they won the very weak Northwest Division with 98 points.

Needless to say, I’m a fan of Boudreau. His .663 points percentage is more than any other NHL coach in history who has coached more than 250 games. That is beyond impressive.

Boudreau has the Wild playing a winning style of hockey. That combined with the emergence of Devan Dubnyk has turned the Wild from a playoff team to a legitimate contender.

Outside of a few offensive spurts here and there, the Canucks have struggled to score this season.

Well, the Canucks are outside of one of those spurts right now.

Memo to the Canucks… pic.twitter.com/Vs4i6l6pM3

The Canucks have scored just ten goals in their last seven games.

They scored three against the league-worst Colorado Avalanche, but other than that they’ve scored two goals or less in every game since the 5-4 OT win against Philadelphia back on January 12th.

They also got shut-out by Arizona two games ago, a key sign that your team is not good at scoring.

Hansen should provide a boost to the offence, both because he is playing and also because Megna is not.

The Canucks are underdogs on paper, but you can bet they’re desperate for a win.

Tonight is the last game at Rogers Arena before a six-game road trip, and we all know how terrible the Canucks are on the road (6-15-3). A win tonight would be huge.

I think they’ll pull off the upset, with Hansen scoring the winner in a 3-2 overtime victory.