The pressure was on. The Canucks were facing a Wild team that was 8-1-1 at home. And Anaheim’s coming.

Here were the Western Conference standings before Wednesday’s games. 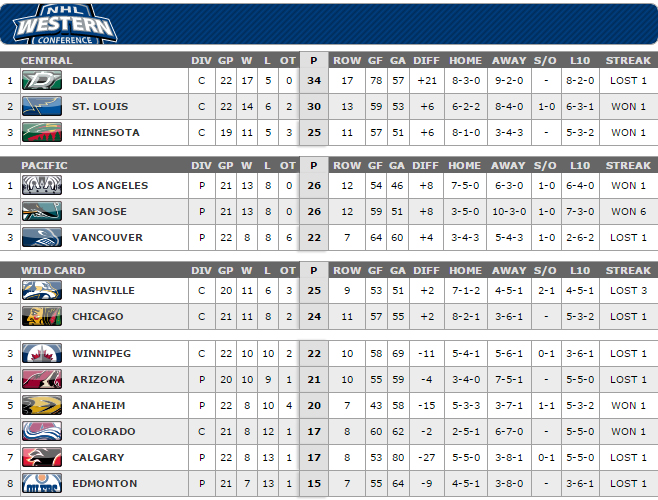 As you can see, the Ducks were only two points back, and if they beat the Coyotes Wednesday, they’d be fully caught up. We knew they’d show some interest in the regular season soon enough.

So how would the Canucks respond?

Well, Vancouver somehow escaped the first period tied 1-1 despite looking like they’d rather be celebrating American Thanksgiving than playing hockey. And then they took over. Here’s the possession chart from hockeystats.ca. 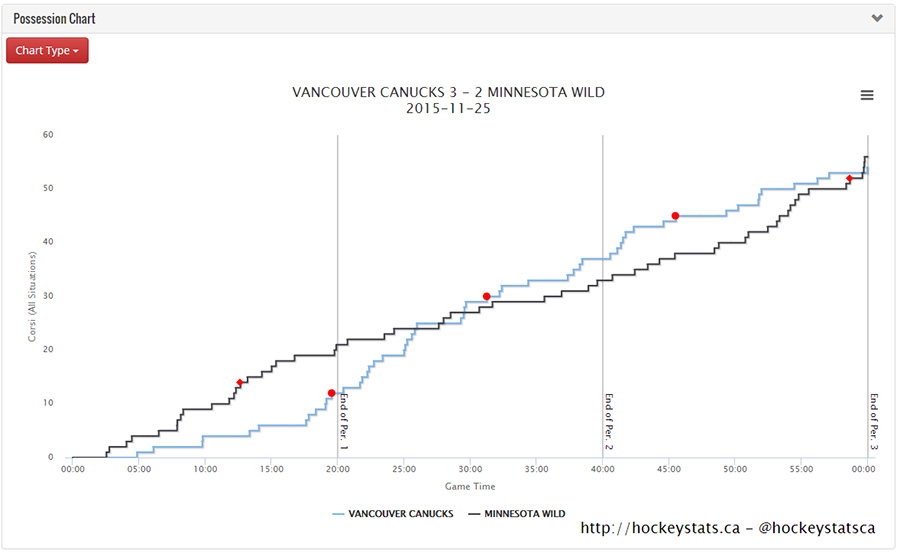 You can see Vancouver took over from the start of the second period to when they grabbed the two-goal lead early in the third. Then Minnesota came hard, but do realize that was helped by two Vancouver penalties.

The Canucks deserved this 3-2 one, and I’d be remiss/blind not to mention Miller earned it too. The guy who started the season was back – rested, fresh, not blaming teammates and Ray Ferraro.

Well, Edler did deflect the first goal over him, so that last statement’s probably not entirely true.

Earlier Wednesday, NHL.com published an article saying Mikko Koivu is leading the way to be chosen as this year’s Selke Trophy winner. From the article:

His SAT percentage in close games (tied or one-goal difference) is 63.05 (second among forwards) and in tie games he ranks first (65.17).

Koivu’s stats are helped by the fact he plays in front of Ryan Suter and Jared Spurgeon.

Looking at this, it was a good bet Koivu would be tasked with shutting down the smoking hot (and good looking) Sedin twins. He and his linemates, along with Suter and Spurgeon played against the Sedins most shifts, and the results were impressive for the Wild.

The Sedins haven’t had many nights this season where the puck was in their own end more than the other, but against Koivu and co, they were in the bottom four Canucks in even-strength corsi stats. Koivu, Suter and Spurgeon on the other hand? Top three on the Wild.

The reason I bring is this up is this will happen when the Canucks face teams with strong shut down lines. They’ll neutralize the Sedins for much of the games.

Luckily the Sedins capitalized on the power play, feeding Radim Vrbata for a goal. They also caught Minnesota off-guard in the third with a stretch pass to Jannik Hansen.

And special mention to the McCann and Vrbata pairing, who were buzzing more than any other line, and were right at the top of the corsi pile with their linemate Chris Higgins.

Here’s Willie Desjardins’ answer when asked earlier Wednesday what he wants to see from Virtanen:

“Well he had lots of hits early and he was battling, but the thing was he’s got to stay in the battle, and that’s kind of a theme for our team – you’ve got to be able to battle more and win more of those battles.”

Just me or is this Willie’s less-innuendo-laden version of Torts’ “We need to be ‘stiffer’ and ‘harder.'”?

Also asked my followers to help me answer the question.

@omarcanuck Drive Higgins to the airport.

Guess that would show he wants it.

And this… I’d take that trade.

Thought you wouldn’t hear about Baertschi with him being scratched? No luck.

First, I’m pretty sure that quote from Willie on battles would apply to Baertschi twice as much.

@omarcanuck consistency and some finish. He has created some ok chances but hasn't had a lot of his own. Doesn't get to scoring areas either

@omarcanuck be good at scrums.

Is this guy Jim Benning’s brother-in-law?

Also liked this write-in answer to this poll:

I do recall writing in at least one SixPack that Vrbata would be scoring soon based on how many shots he was taking.

Now that he’s scored three times in two games I should feel pretty smart. Thing is, most people thought he’d be ok.

Fans would love him and show their appreciation for the two goals, you’d think…

Guess not. At least he didn’t give credit to someone at the other end of the ice, though.

That Sedin goal was made because of the save by Miller on the shorthanded chance, shoulda mentioned that too ???? https://t.co/O48iqgRDn6

He meant Vrbata goal. That’s Jovan, though. He has eyes only for Miller.

@omarcanuck very! Thanks for giving him credit

5. Higgins appreciates hatties as much as all of you

By “all of you” I mean those who were at Saturday’s game and the rest who defended the hat-Scrooges.

You think you hate hat-tricks? Check out Higgins on this.

With the Canucks sitting on a two-goal lead, there’s Vrbata standing wide open, sitting on his two goals and Higgins… shoots?!

Geez, I know it wasn’t an easy pass, but up two goals, you make that pass. If it got through, it was a tap in for Vrbata too.

Earlier this season, I got this nod in the Provies: 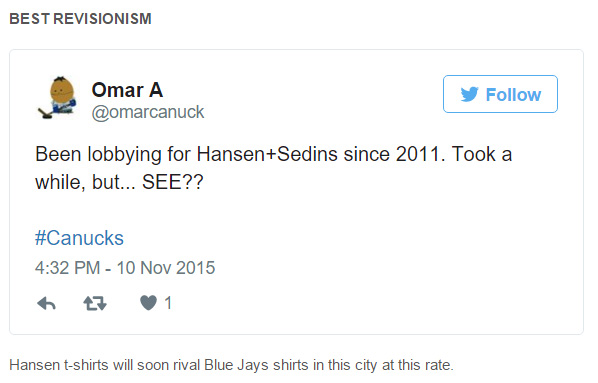 I don’t think Wyatt was trying to call me out personally – with his comment about Hansen t-shirt sales rivalling those of the Blue Jays, he was calling out the entire Vancouver fanbase for jumping on the Hansen bandwagon.

Fair comment considering how this city was reacting to Hansen’s breakaway misses last year, wanting him traded from the team, dropped to the fourth line, or sent to the Wall.

Or maybe I’m wrong and Wyatt was calling me out… but I remember blogging about wanting to see Hansen with the Sedins during the Cup run in 2011.

Hansen can do all the things that has made Burrows successful with them: skate, forecheck hard, get the puck to the Sedins and find an open space. Not easy, but he’s shown the ability to do it. In game 2 vs. Chicago, playing with the Sedins, Hansen one-timed his first goal of the playoffs. In game 6 vs. Boston, he did it again, ripping one in off the post.

Yep, I did want it five years ago. I will admit in the years since I stopped thinking he could be a first-line scorer. Thought he was a great third liner, a player who could play on any line if need be, but scoring like this?