The Vancouver Canucks have lost one game outright in their previous 10 games, and the world is noticing.
On Friday, Damien Cox wrote an article in the Toronto Star in which he stated:

“They’re 7-1-1 in their last nine games and well-positioned to make a post-Christmas run for first in the Western Conference.”

Well thank you, Mr. Cox. Since the city of Toronto is so vastly superior to the little village of Vancouver, you and your kind words make us smile for weeks on end.

You know who does make us smile for weeks on end? Ryan Kesler.

All of a sudden, Ryan Kesler is on pace for a 41 goal season. And, to those who watch his every game, it’s no surprise. Kesler has been the on-ice leader of the team, night-in and night-out, and he’s deserving of the points that are finally coming.

Another thing that makes us smile: the Green Men.

The last time these two teams met, the Canucks were coming off a huge 3-0 victory over the Blackhawks, and they lost 3-2 after not being able to muster the same emotion a few nights later for the Blues.

One tool I have used before to preview how the Canucks will respond to an opponent in previous CWA’s is the Grudge Meter.

Grudge Meter against the Blues on Monday night: 3/10

Eg: You win a chance to run a 100 meter race against Usain Bolt; he takes it easy and lets you win. Think of the grudge Usain would feel towards you after that race.

Exactly, he wouldn’t really give a crap. I mean, if you ever race him again, he’ll probably turn it up just enough to beat you, just to show you he can, but he’ll still be smiling at the end. 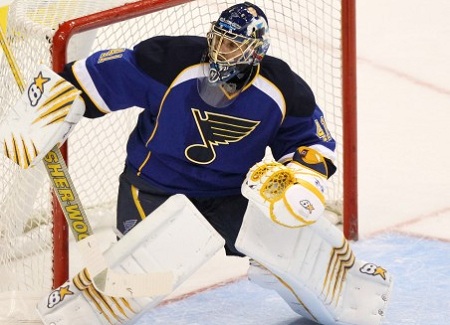 One player who has the ability to turn this game on its head is Jaroslav Halak. He has won his last two meetings against the Canucks – this season with the Blues, and last season with the Habs.

Last time these two teams met, on November 6, they pretended it was the 80’s again, scoring 10 goals in a 6-4 Canucks victory. Hopefully they’ll bring more of the same on Wednesday and it’ll be another exhausting night for the goal judges.

The Red Wings are first in the west with 44 points, and as of the writing of this post, the Canucks are 4 points back with 40. If they’re going to make Damien Cox’s aforementioned prediction come true, taking a run at first in the West, winning this game will be essential. 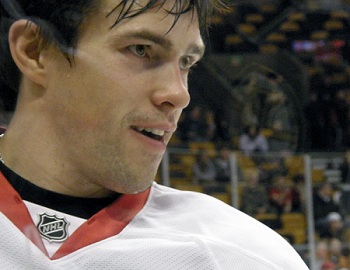 Pavel Datsyuk’s 37 points has him in 6th place on the NHL’s scoring race this season, tied with Brad Richards, Henrik Sedin (atta boy, Hank), and Alex Ovechkin. That ain’t bad.

Ryan Kesler must be salivating at the thought of playing the team that allowed him to score his first career hat-trick last week.

Don’t be too quick in expecting dominance, though. The Blue Jackets have lost their last 4 games, and this will be their chance for vengeance against the team that started that slide. They’ll be motivated.

R.J. Umberger is second on the team with 22 points. Look for him to try to engage Ryan Kesler, as the two have had a serious beef in the past.

The Canucks have played the Oilers twice so far this season, winning both games. In the last meeting, on December 12, it was men against boys, as the Oilers managed only 12 shots on the Canucks, who dominated the game from start to finish.

And that was an away game for Vancouver.

Still, the Oilers have won 6 of their last 9 games, and they now have 4 teams behind them in the league. It’s not much, but for a young team with a bright future ahead, this could be the starting point.

Linus Omark made highlight reels everywhere with his spinorama shootout goal against Tampa Bay a couple of weeks ago. For the record, HTTN is a fan. Taking a risk like that in his first NHL game – imagine if he hadn’t scored, the criticism he’d have come under. That takes stones.