written by Head to the Net – on twitter: @HeadtotheNet

What a difference one week can make. Last Monday, the Canucks were on a 4 game losing streak, and fans were ready to deport Alain Vigneault. The Canucks had just suffered their worst loss since 2008, with their 7-1 debacle against the Blackhawks, and to say people were worried would be a gross understatement.

But the team bounced back, with two big wins over the Avalanche and Sharks, and things are looking up once again.

It does impress me that Canucks fans don’t get too far ahead of themselves these days, after all, it’s only 2 wins, not the prize they’ve been waiting on for 40 years. Maybe they realize that San Jose’s performance on Friday night was somewhat similar to the one by the Canucks against the Blackhawks only 6 days prior.

For some reason the Sharks weren’t all there and didn’t give their best effort. It happens to all teams – as we clearly have seen in Vancouver. Still, it was wonderful to see the Canucks finally showing a killer instinct that has been lacking all season. They finally demonstrated the ability to finish a team off while it’s down, and to crush any hopes of a comeback.

Even more impressive, all four lines produced goals on the night. This can only add confidence to the squad going forward, now that they finally seem to be finding their rhythm.

The schedule is a funny thing. The information is there months ahead of time, yet each next game seems to come as a surprise. See HTTN’s argument with a random Canucks fan, below:

RCF: Another 5 day break in the schedule? What is up with this thing?!

HTTN: The break’s been there for you to see on the schedule the whole time, you know…

RCF: The schedule makers are stupid! They don’t care about Vancouver in New York and Toronto!

RCF: We’re playing the Flames? I hate the Flames! Why haven’t we played them yet this season?! Does Toronto hate us?

HTTN: I thought we already established that.

I know I’m supposed to preview the game, but aside from saying that the Flames are the second worst team in the entire Western Conference, there’s not much there. Oh, they are on a one game winning streak, which in their case might only add some unnecessary complacency. 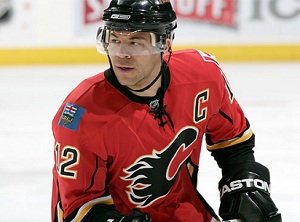 Despite being a member of the despised Flames, Jarome Iginla is quite simply a good guy and an amazing hockey player. After a very slow start to the season, which was explained to be a product of his age by many (ridiculous to me, considering he’s only 33), he’s back. In his last 9 games, Iginla has put up 12 points.

Forget Calgary, this is the game we’ve been waiting our whole lives for. Actually, it’s been less than two weeks, but maybe that’s a good thing. With the previously mentioned 7-1 loss fresh in the Canucks’ minds, perhaps they’ll find the motivation they need to actually be ready for the ‘Hawks this time around.

More importantly, the Canucks’ defense should be much more prepared than they were for the last game, as both Keith Ballard and Dan Hamhuis are much healthier, and the defensive pairings are finally getting used to each other. 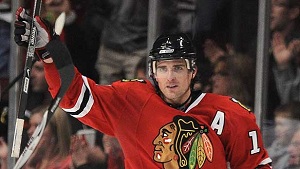 Patrick Sharp is on a 5 game goalscoring streak, and he also has 3 assists in his last 3 games. He is Chicago’s leading scorer, and the man needs to be stopped.

On Sunday, the Canucks will benefit once again by facing a team that has played the night before in Alberta, and they’ll be hoping to see Ty Conklin in net, rather than starter, Jaroslav Halak.

As of the writing of this post, the St. Louis and Vancouver are tied at 27 points on the season, so it’s unfortunate that the Blues might be a tired team coming into this game and won’t be able to give their best effort. 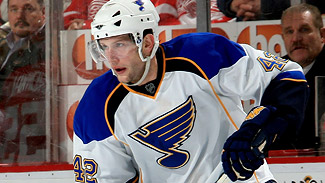 David Backes has put up 9 points in his last seven games and has been one of the most consistent players for the Blues this season. He also leads all Blues forwards in shifts, and is very versatile. Basically, he is their Ryan Kesler – might be a good idea to watch him.