While fans to continue to debate whether it’s more prudent to tank the season or push for a playoff spot, the Vancouver Canucks don’t care what we think and are back in action Wednesday at the Excel Energy Center to face the Minnesota Wild. No matter which side of the fence you happen to occupy, the Canucks have made one of the most depressing seasons in franchise history at least somewhat entertaining through the final stretch.

On Sunday night the Canucks were seeking their first two game win streak since late January. So what better time for a visit from Cody Hodgson and the Buffalo Sabres!

Before the drop of the puck however, Henrik Sedin was honoured for playing his 1000th game in the National Hockey League. It was a fitting ceremony for the captain but, as is becoming the norm for Canuck players, the show was stolen by his kids. For his efforts over the past fourteen years, Henrik was given the traditional silver stick, a silver puck, a portrait of himself, some crystal thing, and a trip to England to sit with the Queen to watch horses or something. 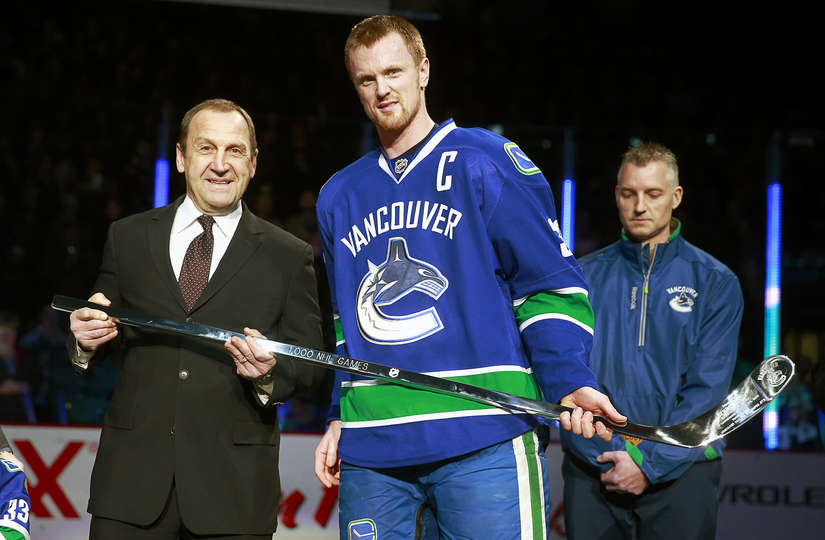 The Canucks were still in celebration mode when Buffalo’s Tyler Ennis (T. Ennis. Tennis. Oh my god…) snapped home his 19th of the season just over a minute into the game. It wasn’t the best start for Vancouver to say the least.

A few minutes later, Rocket Richard candidate Ryan Stanton scored again for the opposition to make it 2-0 Sabres before the game was even five minutes old. It was horrible luck again for Stanton who really shouldn’t be blamed for the plays that led to his three goals against Eddie Lack.

Zack Kassian, sensing if the Canucks lost he would have to endure an endless string of Cody Hodgson comparisons (It’s going to happen anyways, bud), put Vancouver on his man-child shoulders by setting up Brad Richardson and Shawn Matthias with beautiful passes to even the score at 2-2. Say what you want about Kassian’s consistency, but he has had two very solid games against his former team.

The Canucks took the lead a few minutes into the second period when Yannik Weber scored a softy to make it 3-2 Vancouver. You had to feel bad for Sabres Goaltender Nathan Lieuwen, who is from Abbotsford and playing in front of family and friends.

Vancouver added to their lead in the third period when noted Ninja Turtle enthusiast David Booth (we now have one thing in common) was sprung on a partial breakaway by the aforementioned Zack Kassian. It was David Booth’s first goal in 32 games and Kassian’s fourth assist of the game. So take that Cody Hodgson.

The game would end by a score of 4-2 for Vancouver and put them only four points back of Phoenix for the final playoff spot in the Western Conference.

Just as good teams look to the Chicago Blackhawks and Boston Bruins (sob…) for examples of how to run a model franchise, teams looking to tank have to study the Buffalo Sabres. While they may be an embarrassment this season and next, if you look at the amount of draft picks they have accumulated over the past few years, the future is bright.

As I feel that it’s necessary to continue my ongoing quest to offend absolutely everybody, I will start my preview of the Wild in a heavy Minnesota accent. Just picture Fargo or the mom from Bobby’s World (all the cool kids know what I am talking about) and this might make an iota of sense.

Well the Voncoover Canooks are back in Minnersota fer the last time this season, don’t yah know then? Last game with these two was innerestin’ fer sure, with the Wild squeakin’ out the too won win in a heck of a shootout. It was sumptin an’stuff, and now Minnersota has a good tirdy seven wins on the season, good fer seventh the west. Yah betcha they sure doin’ good this year those Wild! They sure bin much bedder than dos Canooks dun-chya-no? Yah dern-tootin’!

Okay, I can’t do it anymore. The spell check on my computer just threatened to hurt my family.

With Dallas and Phoenix still gaining points, the Canucks have no margin for error if they truly believe they have a shot at the playoffs. It will be interesting to see if the newfound offence of the Canucks had hold up against the defensive mindset of the Wild. Making this very unlikely is the injury to Henrik Sedin. Pass it to Bulis summed it up best:

It appears that the Minnesota Wild will be avoiding the final scrum for a playoff position and enter in the first wildcard spot by a healthy margin. Although the Wild have nothing to fear from losing to the Canucks, you know they will do everything they can to destroy Vancouver’s playoff chances.

Apparently Henrik Sedin will be lost for two weeks which, of course, is the most crucial stretch of the season if playoffs are your thing. Apparently Shawn Matthias has impressed the coaching staff enough to warrant a spot on the top line in practice on Tuesday.

1. Does Torts Get a Mulligan?

Ever since John Tortorella had his little pow-wow with the Canucks a few weeks ago, their play has been noticeably better. Torts had this to say following the victory over the Sabres:

“It’s been a tough year and I know the market isn’t used to it,” head coach John Tortorella said after the Canucks’ 4-2 win over the Buffalo Sabres. “But did we ever lose our attitude about trying to come back? No, I think our team has been really good that way under some major scrutiny.”

There have been many reports that the team quit on Tortorella a long time ago and their play during the early parts of March definitely back up that theory. However, whatever was said during that post practice meeting between the team and Torts must have resonated with the leadership core. Did they bury the hatchet? It’s very possible because despite all of Tortorella’s issues, he has been willing confront his faults as a coach and change things like his relationship with the media.

For a moment, forget everything we believe to be true about the Aquilini family and their views on personal finance. Does Torts get a second chance based on the injuries and learning from his mistakes this year?

It doesn’t have to be against the Wild, but please give Eddie Lack a breather! Starting the amount of games in a row that he has is even too much to ask Henrik Lundqvist. Tortorella and Rollie Melanson may not trust Markstrom, but for Eddie Lack’s sake he really needs a day off.

3. With Henrik Out, It’s Up to Kesler and Jensen

The road to the playoffs (if there is one) just got a heck of a lot more daunting now that Henrik Sedin is out for at least two weeks.

It should be interesting to see what Tortorella does with his lines and more specifically, Nicklas Jensen. Now might be a good opportunity to see if the young Dane can mesh with some other top-six players other than Burrows and Henrik. Heck, it might even be worth it to see if Kesler has a decent winger to play with next season. You know, if he still wants to stay in Vancouver and make terrible radio ads.

Even without Henrik, I really think the Canucks will come out swinging and win this game by a score of 3-2 much to the chagrin of Tank Nation dun-chya-no?