With the losses mounting and the team slowly falling down the Western Conference standings, the Vancouver Canucks will need a strong effort against the Dallas Stars to turn around a rather mediocre December.

After losing their last four games (check out Omar’s take on the current situation), Vancouver is fortunate to still be in a playoff position, although their grip on a spot to the dance is fragile to say the least as only two points separate the fifth place Canucks and ninth place Calgary Flames. Remember when both teams were at the top of the heap? Those were the days…

Not to say that the fun times are over. The Canucks are a three-game winning streak away from looking pretty good again. Unfortunately, the way this team has been trending over the past month has raised some concerns about regression as some of the more dominant teams (see: Blackhawks, Chicago) start to figure things out and climb to their rightful positions at the top of the conference.

Is this team finally ready bust the slump and continue being one of the feel-good stories of the National Hockey League this season?

Personally, I’ll just be happy if they don’t give up a 3-on-1 break within the first five minutes against the Stars.

Perhaps the only thing uglier than the Canucks’ last game against the New York Rangers are the Californian teams attempts at designing their Stadium Series jerseys.

Not to be too blunt, but the defence from the Canucks was downright horrifying on Saturday night against the Rangers. Constant breakdowns within the first 10 minutes saw New York jump out to a 3-0 lead and they never looked back. Nick Bonino managed to break the shutout in the third period but it was of little consequence as the Rangers cruised to an easy 5-1 win on Hockey Night in Canada.

Now looking to break their most recent streak against the Dallas Stars, Vancouver will need to adjust their systems ever so slightly to avoid whatever the hell happened on Saturday.

1. Taylor vs. Tyler…I’m going to go with Tyler 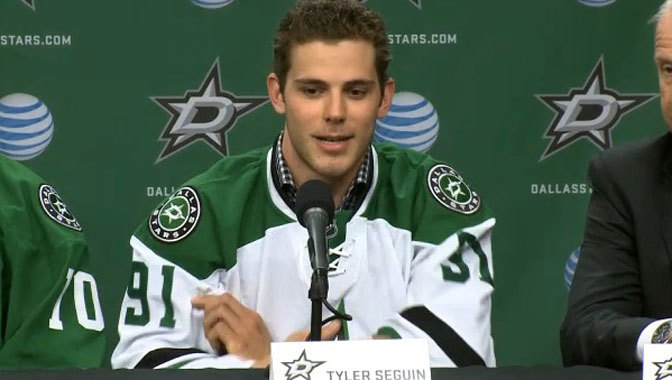 Hockey is a funny sport sometimes.

Going into the the 2010 NHL Draft, the big debate (dubbed Taylor vs. Tyler) was whether the Edmonton Oilers would draft Taylor Hall from the Windsor Spitfires or Tyler Seguin from the Plymouth Whalers. Taylor Hall was the consensus number one pick and unsurprisingly, the Oilers went with Hall and the Boston Bruins took Seguin second overall.

Now four years later, Seguin is leading the NHL in points, goals and has a Stanley Cup to his name despite some perceived off-ice maturity issues.

Taylor Hall? Well he currently plays for one of the most embarrassing franchises in the NHL (currently on their fifth coach since 2009) and is the subject of recent trade rumours.

Obviously it’s way too early in their careers to judge, but Tyler Sequin has easily had the better run up to this point, although that could easily change if Hall pulls a “Get Out of Jail Free” card and leaves Edmonton.

2. Nick Bonino’s Turn to Step Up 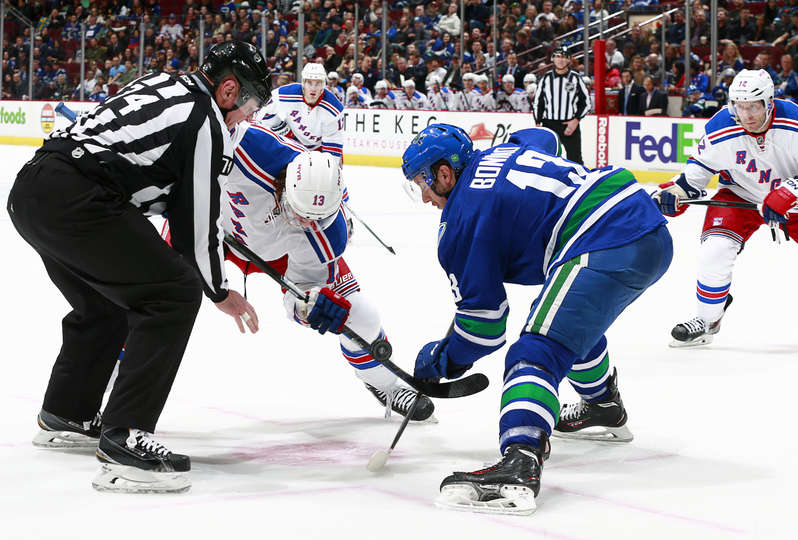 There is no doubt that one of the keys to the Canucks early success this season was the play of second line centre Nick Bonino. As Bonino’s production has dropped, so has Vancouver’s record.

Before his irrelevant goal against the Rangers on Saturday, Bonino had gone 15 games without a goal which is obviously way too large of a slump for top-six players on a playoff contender. For the Canucks to be effective, all four lines need to be working and Bonino is a big reason why the second line hasn’t been.

Willie Desjardins tried giving him an injection of Radim Vrbata to get him going, but the experiment did not have the desired results and Bonino will be back with Alex Burrows and Chris Higgins. For the Sedins to be at their most effective, they need a second that works and it’s up to Bonino to be the guy who makes that happen.

3. Contain the Speed of the Stars

The Dallas Stars are a very quick team and in their last game against Vancouver, they were able to easily exploit the Canucks defence en route to a 6-3 win back in October.

It’s no secret that the Canucks have struggled against the fast teams in the NHL and Desjardins is hoping that a few tweaks to the system will make a difference. Against a team that boasts Tyler Seguin and Jamie Benn, you’d better hope these changes have a positive effect because the game could be over quicker than the Rangers game. And that one was quick.

If the Canucks are able to minimize the mistakes made by ill-timed pinches (SBISA AND BIEKSA), they will have a good chance to take out the Stars.

Following a mildly unsuccessful attempt to shake up his lines, Willie Desjardins is giving his squad another shot to rekindle some of the chemistry that has been lost over the past month. The Canucks did recall Tom Sestito from his conditioning assignment in Utica, but it appears that he still doesn’t have a spot on Desjardins’ roster which, despite what some may argue, is still a good thing for Vancouver.

The Canucks will make an adjustment with their defence pairings, swapping Ryan Stanton and Luca Sbisa. The Sbisa-Bieksa pairing has been a disaster recently and Desjardins is hoping that Ryan Stanton can regain some of the chemistry he had with Bieksa last season.

***Update: Surprise! Eddie Lack will start for the Canucks.

Expected to be at the top of the Western Conference, the Dallas Stars have been among the bigger disappointments in the NHL this season and are currently sitting in 11th, just above Colorado, Phoenix, and Edmonton.

Although I’m worried about the Canucks matching up against the speed of the Stars, I still think Vancouver finally bounces back and defeats the Stars 5-3.