Three games down, the Canucks face elimination in San Jose with the dark cloud of a potential sweep hanging above them.

Despite icing a great possession and shooting game, the Canucks have played their third straight playoff series without scoring when they need to. Through the first two games, there was still some belief that the Canucks would outlast the Sharks and elevate their game. After all, they kept getting better, and players like Ryan Kesler and Roberto Luongo looked like they could carry the team on their back. In Game Three, surely all the work would begin to pay off with a win.

Except that it didn’t. The Canucks dropped a 5-2 loss to San Jose in that game, giving the Sharks a 3-0 series lead. This seemingly insurmountable hill to climb isn’t an impossible one, but at the rate Vancouver is playing, it sure looks like it is.

TSN’s Ray Ferraro explained the Canucks’ woes in this series in a recent CanucksArmy podcast.

When you look at individual performances for this series, you can understand Ferraro’s observation. Players like Patrick Marleau, Joe Pavelski, and Logan Couture are clearly outplaying the Sedins, Kesler, and Burrows in goal output, offensive zone time, and shots. Even Raffi Torres and other depth forwards on the Sharks like Adam Burish are contributing more on the ice than Vancouver’s best and most expensive talent.

For Tuesday’s Game Four, unless that talent plays the way that we saw them play in big games throughout this year, a sweep is very much likely.

Schneider gets the start

Despite a third period breakdown in Game Three, coach Alain Vigneault has put his faith once again in Cory Schneider to start a must-win Game Four.

When asked about putting the loss in Game Three behind him, Schneider stated that he already did. “It’s only an afterthought. New day, new game, completely different circumstances. I feel fine.”

Truth be told, Schneider deserved his starting role this year, and he kept the team competitive in Game Three for the first 40 minutes of play. If he can extend that to 60 tonight, then Vancouver could miraculously play host to Game Five.

Bieksa on penalties and embellishment

On Monday, Kevin Bieksa gained attention for complaining to the media about a string of embellishments by Sharks players, specifically by Joe Thornton and Logan Couture.

Going so far as calling them “so-called Canadians”, Bieksa called the players out for not playing the game with integrity, and accusing them of exploiting physical situations to force penalties against the Canucks.

“He snaps his head back, he flails,” Bieksa said, when referring to battles with Couture “You touch him after the whistle and he’s going to jump off the ice and throw himself into the glass…these are hard calls for officials to make, and right now they are going against us”.

Bieksa was mostly referring to one play after a faceoff between Henrik Sedin and Couture in Game Three – one that, while a little bit embellished, deserved a swift high-sticking penalty to the Canucks captain.

This doesn’t so much help the Canucks’ image of themselves being embellishers and divers (noting various performances in the first round of 2012). Joe Thornton, when asked about what he thought about the Bieksa comments, brushed them aside and simply referred to himself as having dual-citizenship.

If the Canucks are resorting to trying to win battles with the refs rather than with Sharks goalie Antti Niemi, then the team has a problem. If Vigneault and his core wish to remain in Vancouver next year and not be dismissed by the city’s sports media and fans, then their only task is to focus on the fundamentals of the game, and be disciplined. 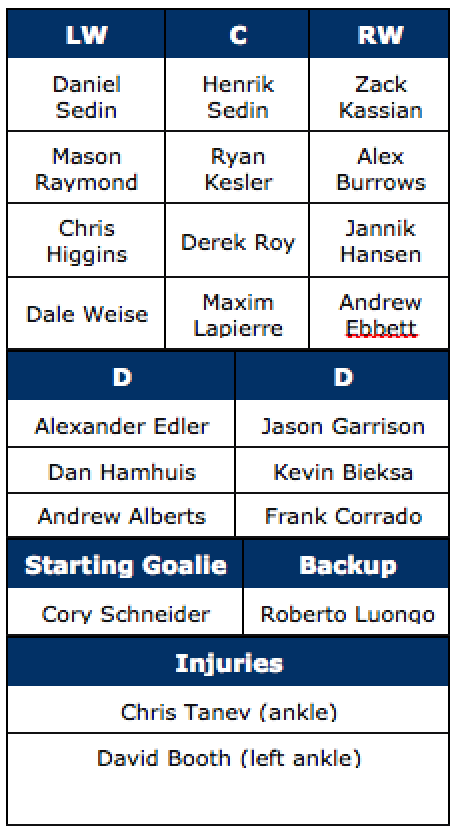