The Canucks are down in a hole, a deep one. Losing the first two games at home to the Sharks leaves them in a tough one to climb out of, but going into San Jose, they do have the pieces available to leap out of it. Unless, that is, a surprise gamble by coach Alain Vigneault blows up in his face.

This afternoon, Cory Schneider was announced as the starting goaltender in place of Roberto Luongo for game 3 against the Sharks. The decision surprised many, as Luongo’s play in games one and two kept the team competitive. While it would seem unfair to Luongo’s performance, an injury to coach Vigneault seems to be an unreasonable cause for Schneider to lose starting privileges.

Despite that, if Schneider is only at 90 per cent, it would seem logical that the choice in net for such a pivotal game in the series would be the goalie who is so obviously playing at 100 per cent. This is just another piece of fodder for all those who speculate on whether the winning-est coach in Canucks’ history should hold on to his job next year.

As for the team’s chances in this series, most detractors of the team’s hopes this spring call out the lack of scoring as the main factor behind the 2-0 series deficit. Then, they try to shed some light on Vancouver’s playoff history, citing that the team has never come back down two games to none.

You’d be right that calling to these two obstacles as disheartening to the idea that more playoff games will ever take place in Vancouver for the rest of this post-season, but wrong once the team’s true offensive stats are taken into mind.

On top of that, the Canucks have time and time again come back from 3-1 series deficits, including in the Brian Burke era when the St. Louis Blues held that exact series lead. I remember being in elementary school at the time and having a Markus Naslund shirt gifted to me right before  the fifth game of the series (which the Canucks decidedly won), and dismissing the team as “sucky.”

Luckily, this time they’re not sucky, and we’ve got a chance. Why?

Taking into account Fenwick stats that consistently describe whether or not a team is “good”, the Canucks, unless the Sharks elevate their game, should start capitalizing on the many chances they’re creating

Through both games, the Canucks have kept pace with the Sharks in terms of shots, indicating that the offensive production of the team isn’t as defective as it seems. The gears are indeed working – the Sedins had 11 shots last game and Kesler had five – but the end product hasn’t yet produced what it needs to on the scoreboard. They absolutely need to put more shots on Niemi, but they aren’t doing a bad job of it already. The Canucks are also dominating possession of the puck, indicating that they have control of the game in most cases.

These stats may not guarantee anything, but they were used by many commentators to predict the rise of the L.A. Kings last year from a nearly season-long slump in the year they won the cup. For most of their games, the Kings were behind in scoring, but had dominated possession and had consistently outshot opponents. The more shots and possession you have, the more chances you have to score. The more chances you have to score, the more you have to capitalize on. Essentially, if the Canucks keep pushing as much as they already have in the other team’s zone, ‘luck’ should find a way.

The Sharks do however have an edge in terms of their superb home record, which could intimidate the Canucks; the Shark Tank has seen only two regulation losses in the shortened season. Granted, home teams have the advantage of being in their own element, the Canucks can rally together to quiet the crowd with an early energetic start. More forechecking, drawing more penalties and big hits early on can subdue all the comfort that the Sharks have, and bring even more momentum in the direction of Vancouver.

Keys to the game 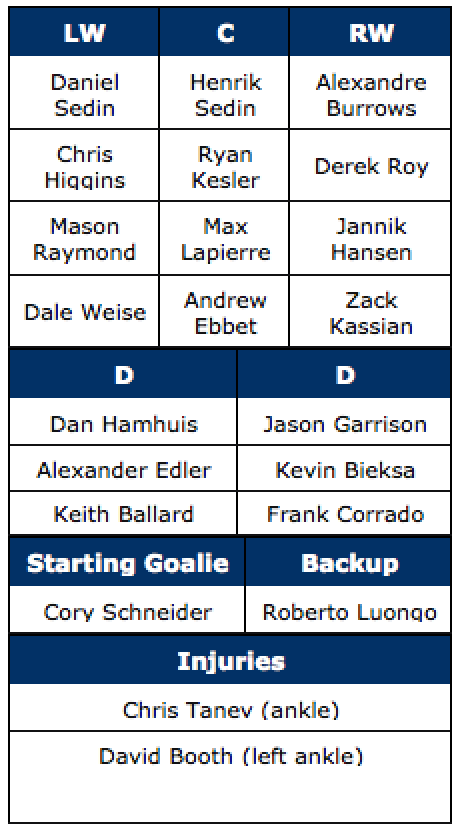