The Vancouver Canucks continue their short swing through California Tuesday night when they pay a visit to the regrettably named SAP Centre to take on the San Jose Sharks.

A Canucks game will be the perfect opportunity for everyone to take a break from watching the World Junior Championships, chill out for a second and stop lamenting who the Canucks “should” have drafted this past June. Besides, the player that Jim Benning should have drafted changes every other day anyways.

@ryanbiech Rob brought up how people were upset Hodgson got picked over Beach…Doesn't matter who VAN picks, someone is always better

Our guy Ian makes a valid point at the end there. No matter who Vancouver picks, there is always a better player. And even though I get sick and tired of this same debate every single World Junior Tournament, the depressing part is that historically, the pessimists have been right. But for now, we have no idea how these players are going to turn out. So every time William Nylander scores a goal, settle down and remember that even Cody Hodgson had himself a great tournament in 2009. And no Maple Leaf fans, I am not comparing Hodgson to Nylander. I’m just saying that one’s performance at a short tournament is not an accurate barometer of their future success in the National Hockey League.

Anyways, the Canucks are playing against the Sharks. So let’s talk about that now.

The San Jose Sharks are slowly climbing back to respectability in the Western Conference after a rather terrible start to the season. The Sharks currently sit in the 8th and final playoff spot after a 7-2-1 record over their last ten games.

Although not the offensive juggernaut that they used to be in glory days of losing every Western Conference Finals series, the Sharks have a tremendous amount of depth amongst their forward group, specifically down the middle with Joe Thornton, Logan Couture, and Joe Pavelski. The three centers sit 1-2-3 in team scoring which is nothing short of impressive, especially when you cheer for a team like Vancouver whose centre depth is, let’s say, a work in progress.

1. The Battle Up the Middle 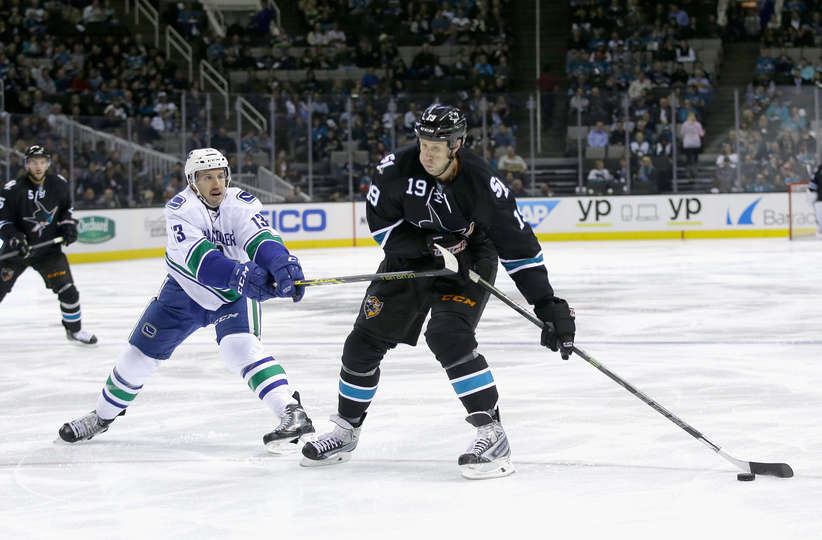 As I alluded to earlier, this may not be much of a battle considering the depth that the Sharks posses. Along with leading the team in scoring, Thornton and Pavelski boast 56.9 and 56.4 faceoff percentages respectively. It’s no secret that faceoffs have been the bane of the Canucks’ existence this season, so the Sharks may, dare I say it, smell blood in the water. I’ll let myself out…

What I’ll be interested in seeing is how Willie Desjardins utilizes Bo Horvat against San Jose. So far this season, Desjardins hasn’t been shy about playing the rookie against some of the NHL’s best centres so naturally it would seem like he will have no problem matching Horvat against Thornton and Couture.

After keeping Draisaitl from the #WJHC2015 – the #Oilers send him back to junior after acquiring Roy. pic.twitter.com/jaDv2cSsRe

This one is going to be paramount if the Canucks are going to stand a chance against the Sharks. San Jose is second in the NHL in power play percentage at 24.5 a run one of the scariest setups in the NHL.

Fortunately, Vancouver boats a pretty effective penalty kill that’s top-ten in the league. However, if at all possible, avoid giving Joe Thornton and Logan Couture any room to play with because they will burn you easily if given the chance. Speaking of Joe Thornton, why exactly did the Sharks want to get rid of him again?

I didn’t get a chance to watch Sunday’s game against the Anaheim Ducks as I was driving to the airport at the time, but I did catch the game over the radio and what I had to listen to was about as predictable as a Nicholas Sparks novel (someone gets a disease). 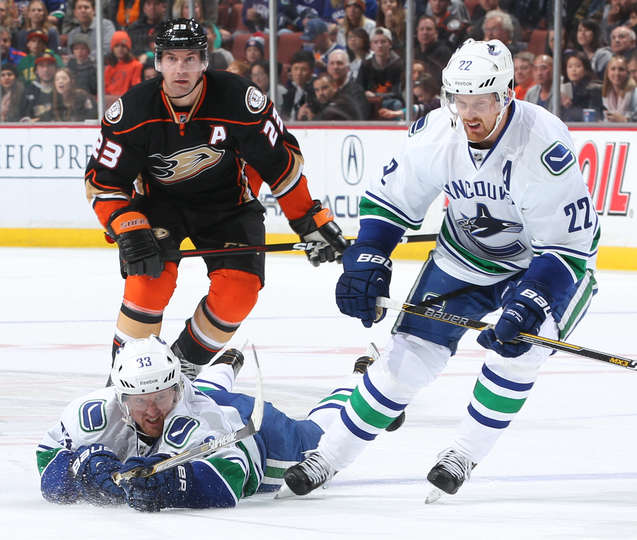 The Canucks somehow managed to jump to a 1-0 lead thanks to Yannick Weber’s point shot early in the second period. After that however, Vancouver didn’t seem too interested in pushing the play past their own blue line. It was one of the games where you knew the Canucks were going to lose 2-1, you just did’t know how exactly. Fortunately, Vancouver managed to stumble into overtime and gain that valuable loser point before succumbing to that inevitable 2-1 loss.

If the Canucks have one job on Tuesday, it’s to actually show up and provide something of a challenge to the Sharks. Pretty simple stuff right?

The Canucks didn’t do any line rushes at practice on Monday, but head coach Willie Desjardins did hint at some possible line changes. Desjardins wants more of a net-front presence and is considering putting Alex Burrows back on the first line.

Zack Kassian appears to be close to returning to the lineup, which may complicate things upon his return.

For now, I’ll assume that Kassian sits out and Burrows moves to the top line. As always, we will update this section when more information becomes available.

I hate it when the Canucks play the Sharks in San Jose. I hate it so very much.

Whether it’s the Sharks having that extra jump in their own building, or that annoying organ goal song that is only rivalled by Chelsea Dagger (which successfully replaced Cobras in my night terrors) on the annoyance scale, it’s just never that fun to watch the Canucks in Northern California.

As much as I’d love to see the Canucks crush the Sharks on home ice, I’m putting my money on San Jose winning by a couple of goals. Let’s say 3-1.

Plus, we don’t even know if the Canucks will be able to make it to the game yet considering they forgot to show up in Anaheim on Sunday night.