For the first time in more than five months (it feels longer), the Vancouver Canucks will be playing a hockey game at Rogers Arena. Preseason fever is sweeping the city!

Ok, perhaps I’m overselling this game just a little bit but it does feel nice to have something that resembles NHL hockey to watch on a Tuesday night. There will actually be two games played on Tuesday as the Sharks and Canucks split-squads will play at Rogers Arena and in beautiful (?) Stockton, California.

Both teams are playing their first game after embarrassing 2013-14 seasons (but for very different reasons of course). The Canucks, as we all know by now, finished with the sixth worst record in the NHL last season. The Sharks had an excellent regular season last year and an excellent first three games of the playoffs too. Of course it’s those final four games of the playoffs for the Sharks in which the LA Kings erased a 3-0 series deficit that poisoned an otherwise successful season. 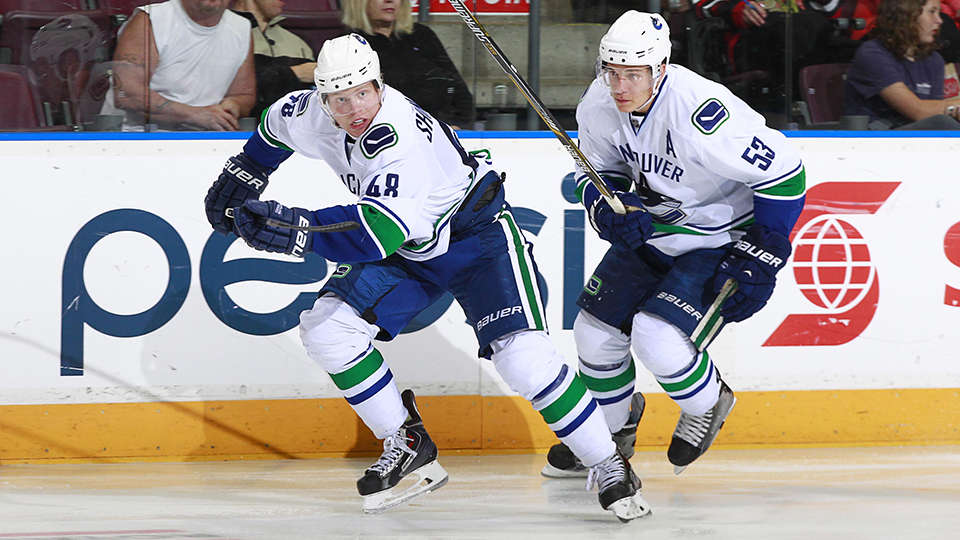 1. Will the Young Stars Shine?

The Canucks’ prospects didn’t exactly dazzle us with their performance at the Young Stars tournament in Penticton last week but the real test will come in the preseason. The only youngster penciled in to a lineup spot at the moment is Linden Vey, while the rest of the team’s prospects will be facing an uphill battle to secure a roster spot. The likes of Bo Horvat, Hunter Shinkaruk, Nicklas Jensen and Frank Corrado will need to turn heads in the preseason if they want a chance to crack the opening night roster.

We should be done with the goaltending drama in this city but of course we know better than that don’t we? There’s always a chance of the fans chanting “Ed-die, Ed-die” after a couple of poor outings by starting goalie Ryan Miller but that’s not what I’m talking about here. Apparently Jim Benning and Willie Desjardins are seriously contemplating keeping three goalies on the roster to start the season. Is it just posturing while Benning finds a trading partner for Jacob Markstrom? Lets hope so.

We all know Sestito can fight, but can he play hockey too? He might have to prove it given recent comments from Desjardins. Desjardins doesn’t appear to be married to the idea that you need to carry an enforcer and might feel at ease with Derek Dorsett (10 fighting majors with the Rangers last season) in the lineup anyway. Sestito is going to play with two players destined for the AHL in his first preseason game, so proving he can play won’t be easy.

The only injury to speak of is Ryan Stanton, who was injured over the weekend by Darren Archibald during an inter-squad scrimmage. The injury does not appear to be serious as Stanton will rejoin the team at practice on Tuesday. Some notable healthy scratches include: Chris Higgins, Jannik Hansen, Brad Richardson, Shawn Matthias, Luca Sbisa and Ryan Miller.

Here‘s how the Canucks will line-up at home in Vancouver:

And here is how they will look on the road in Stockton, CA:

The Canucks will win in Vancouver and lose in Stockton, which is fine because we can’t see the Stockton game on TV anyway.