After an emotional game in Boston, the resilient Canucks stroll into the First Niagara Center in downtown Buffalo as the league’s best road team, having won 3 of their first 4 on their current trip, and 19 away games overall. On paper, it doesn’t get much easier than the Sabres, but they’ll likely want to put on a show even if Ryan Miller won’t be starting between the pipes.

The Canucks were badly outplayed by the Bruins on Tuesday evening. Well, almost. Eddie Lack was nothing short of sensational in what might have been his best game of the year. It comes at an opportune time for the big Swede, as he’s been given the reigns to this team with Ryan Miller now on the IR. Obviously, the Canucks would like to shore up significantly in the defensive zone relative to last game, but you’d be hard pressed to find someone not pleased with the play of the new Canucks starter. 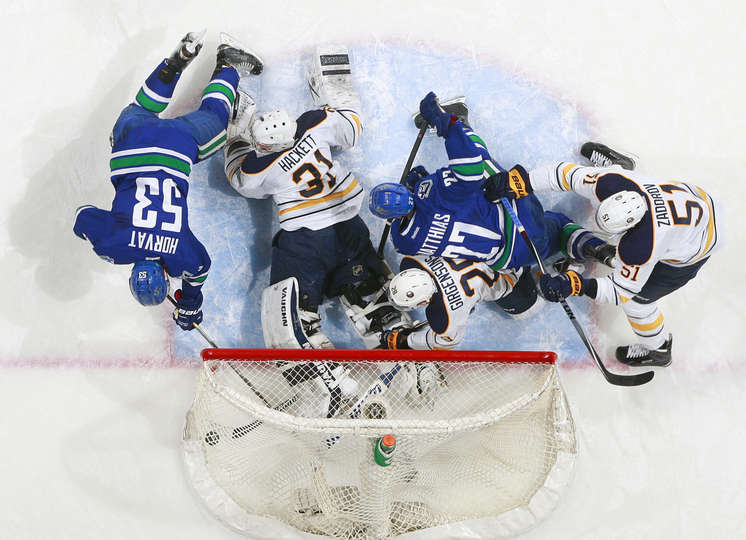 Last time these two teams met, the game followed the predictable storyline and the Canucks won 5-2 in Vancouver. Any excuses for Willie D’s team fly right out of the window when they look across the ice at their opponent. Already a historically bad team, the Sabres are having some injury issues of their own. Josh Gorges and Mike Weber are out, along with Tyler Ennis and Zemgus Girgensons.

We’ll see if some of the Canucks’ injury issues catch up to them, or if Eddie Lack is still recovering from the barrage he faced against the Boston Bruins. 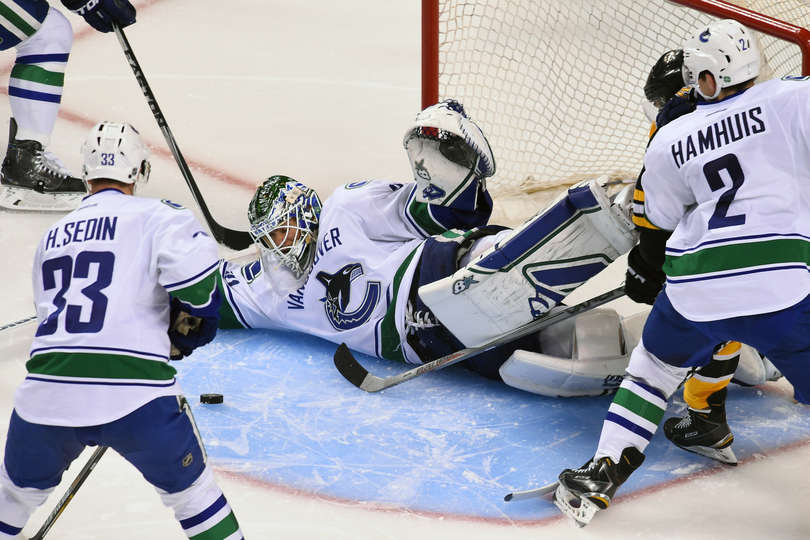 All the talk coming out of Tuesday night’s tilt was around the play of Eddie Lack. With the injury to Ryan Miller against the New York Islanders on Sunday, there was more than a negligible amount of anxiety with regard to Lack stepping in. After all, he did something awfully similar last year and we all know how that ended up… He was excellent in a backup role last year before Roberto Luongo was dealt, but down the stretch he failed to live up to lofty expectations. However, another year of experience and the added incentive of displaying how much he’s improved his game could make the remainder of this campaign Lack’s coming out party.

With the call-up of Utica standout Jacob Markstrom, Lack does have a measure of stability behind him. Though Markstrom has failed to adjust at the NHL level in the past, it appears he is also undergoing somewhat of a redemption season. Only time will tell if the two tall Swedes can lead the Vancouver Canucks to the playoffs.

Whether it was the bubbling trade rumours, numerous healthy scratches, frequent benchings, lack of playing time, or an awful mixture of everything I’ve mentioned, Zack Kassian has completely blown up. In fact, it was against his former club, the Buffalo Sabres, that this roll began. In the last games, Kassian has 7 goals and 3 assists and has only managed to miss the scoresheet twice. He’s not only scoring, but he’s netting clutch goals. His tallies against Boston and the Islanders were both game winners.

My only worry is that Kassian is becoming self aware, but who knows… maybe that’s a good thing!

3. Tank You Very Much

As I mentioned, the Sabres are really bad. No, they’re really, really bad. They are currently on pace for a grand total of roughly 55 points. Most would be surprised if they even got that many. However, it’s all part of the master plan for GM Tim Murray. After this season, he will have washed his hands of any player not deemed entirely necessary to the rebuild by way of trade or free agency. If there are other teams out there attempting to rebuild *cough* Toronto *cough*, this is the organization you should be emulating. They may not be winning any games right now, but they will be an impressive team in a few years. With the prospects they’ve developed and the picks they’ve accumulated, the Buffalo Sabres should be ready to compete in the future.

The Canucks should be polite and oblige their opponent by beating them soundly and adding to their loss total.

The Canucks will likely ice the same lineup that beat Boston on Tuesday. If there are any changes, we’ll have them right here.

With the injuries the Canucks have suffered in recent weeks, you’d almost expect them to be the underdog entering any contest. Well, that may have been true for the first four games of this road trip, but now they’re dealing with the Buffalo Sabres. In the past, Vancouver has been guilty of playing down to their opponent’s level. Let’s hope that trend has been, at the very least, curbed. I’ll take the Canucks by a score of 5-1.