The Vancouver Canucks play the Detroit Red Wings in a Monday night clash at the Joe Louis Arena. This is one of the few games where the schedule makers have provided a favour to the Canucks. The Canucks were practising in Detroit on Sunday morning while the Red Wings were playing the Washington Capitals in an early afternoon game in Washington. This game is an interesting match-up given these two teams in many ways are mirror images of each other; once elite teams that are now facing the reality of having to scratch and claw to make the playoffs.

The Canucks lost 4-3 to the Winnipeg Jets in front of a jacked up Winnipeg crowd. The Canucks came back from 2-0 and 3-2 deficits, but lost the game for good on a Devon Setoguchi goal at 17:04 of the third period.

The loss spoiled a brilliant performance from Eddie Lack and highlighted more of the same problems for the Canucks. The Canucks got buried early and simply took too long to get into the flow of the game. The team just cannot seem to put a consistent 60-minute effort in and this was just another example of how extended lapses in their play have killed them.

The Red Wings are coming off of a wild 6-5 overtime loss to the Washington Capitals and currently are fighting for their playoff lives in a weak Eastern Conference. These are not the elite Detroit Red Wings of years passed. The game versus the Capitals was a game you just did not see the Red Wings lose previously. The Red Wings really need to count their lucky stars as it seems their move to the Eastern Conference could not have come at a better time.

On a side note, the Capitals goaltending was stunningly bad against the Red Wings. George McPhee would be wise to try to trade for Roberto Luongo. The Capitals would be a contender in the East with Luongo in net, but they don’t have cap space. They could swing a deal if they were willing to part with Michal Neuvirth and one of Troy Brouwer (wishful thinking on my part) or Martin Erat (I’m not sure the Canucks would want Erat, but it might be a pill the Canucks have to swallow).

I personally think a Luongo trade is inevitable before the start of next season and the Capitals would be crazy not to jump on this now with the Eastern Conference so wide open.

A few weeks ago the Canucks were looking to be back to full health. Yeah, not so much! Kevin Bieksa, Chris Tanev, and Yannick Weber are all back in Vancouver, while Mike Santorelli is out for the season. Henrik Sedin is back skating and will likely play tonight.  The Canucks have recalled Yann Sauve from the Uitica Comets and will jump right into the lineup. Breaking news has the Canucks trading Dale Weise to the Montreal Canadiens for right-handed puck moving defenseman Raphael Diaz. The lines look like this for today’s game: 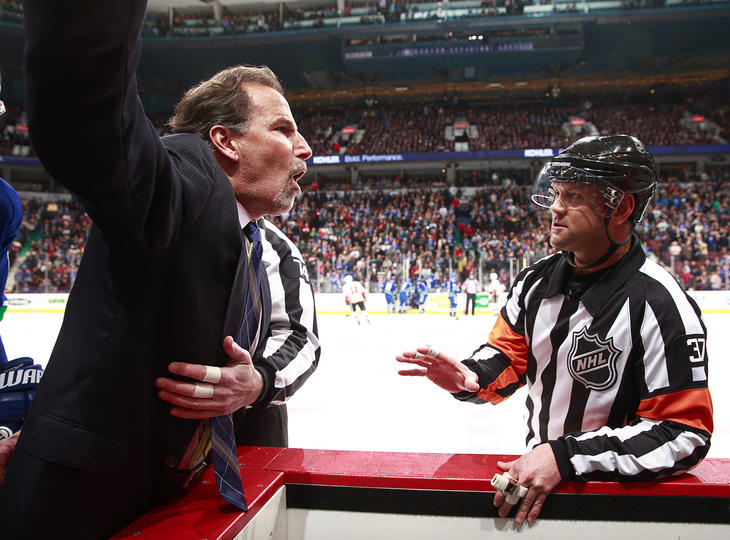 That’s right, he’s back! John Tortorella will be back behind the bench after serving his 15 day suspension for the ridiculous events that happened against the Calgary Flames a few weeks ago. Mike Sullivan proved as a scary replacement as head coach with more than a few head-scratching moves during his six game tenure. Sullivan compiled a 2-4 record in Tortorella’s absence and, other than showing some confidence in Zack Kassian, I thought he was a complete disaster behind the bench.

2. The Return of the Captain

Henrik Sedin will very likely return to the Canucks lineup vs. the Red Wings, and this could not come too soon. The Canucks entire lineup is thrown out of whack without Henrik. Many have spoken of the lack of Canucks depth, but losing a player like Henrik Sedin is a completely different matter. It is very apparent that as Henrik goes, so too go the Canucks!

This goes for the Canucks and Canuck Nation. Perhaps we need a little reminding from time to time…

Things that make you go hmmm…

I often read Bruce Garrioch’s (@sungarrioch) Sunday column in the Ottawa Sun. His column is a must read for trade rumours and general goings on in the NHL, but I was shocked to read Saturday’s column. Garrioch states that both the Canucks and Kings should be inquiring as to the asking price for Ryan Miller? Let me get this straight: two teams with above average goaltending and no scoring should try to land Ryan Miller? Bizarre to say the least! I read the column multiple times to make sure I read it correctly. It makes no sense whatsoever and has to make one question Garrioch’s state of mind! Memo to Bruce Garrioch: the Canucks and Kings have the likely starting goalies for Canada and the United States respectively, they do not need to trade for Ryan Miller!

The Canucks are coming off a another deflating loss and the Red Wings looked every bit as disastrous vs the Capitals. Neither team inspires confidence. I’ll give this one to the schedule makers and call a 4-3 win for the Canucks!

The predictions season record is currently at 32-24.