After a long road trip and some much needed rest, the Canucks are back in action tonight against Alain Vigneault and the New York Rangers.

While the recent seven game swing through the Eastern Conference started off in positive fashion, things quickly soured when the Canucks traveled north of the border. With convincing wins in Columbus and Pittsburgh sandwiching an off-game against the Red Wings and another win in Washington, the Canucks dropped a stinker in Toronto, blew a 3 goal lead in our nation’s capital, and never looked competitive in Montreal. The end result was a 3-3-1 road trip that stalled the impressive roll the Canucks were on up until now.

While there are a few tentative fans out there, the Canucks have the opportunity to delay any doubts if only momentarily. A Saturday game with a national broadcast against an Original 6 team is just about as big a stage as you can get during the regular season. Should Vancouver wish to stem the recent lull in victories, this would be a great time to show off.

Fans in Rogers Arena and watching from home will get a chance to see the likes of a resurgent Rick Nash and the ever popular Henrik Lundqvist pitted against a Canucks team looking to start a 4-game home stand with a bang. Add-in the fact that Alain Vigneault, the most successful head coach in Canucks history, is back in town and there should be quite a buzz at Rogers Arena tonight. 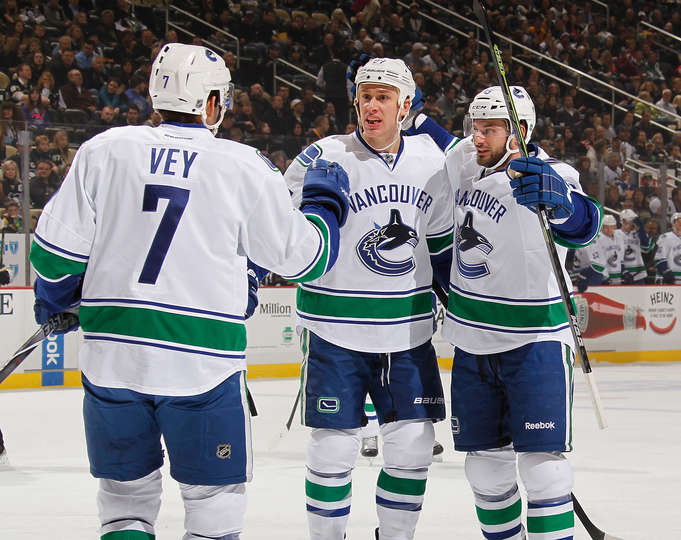 Much has been made about a couple of the questionable hits involving Canucks players lately. Fortunately, or unfortunately depending on your perspective, the Vancouver players have been on the receiving end; namely Shawn Matthias. After a cheap shot from Mike Ribeiro on November 2nd (I despise Mike Ribeiro), Matthias took another blow to the head in a more blatant headshot from Leafs’ defenceman Stephane Robidas on the recent road trip.

Now, I understand the NHL Department of Player Safety is an easy scapegoat in just about all situations. I don’t fault them for not disciplining the Ribeiro. It was penalized in game, Matthias kept playing (and playing well, I might add), and it appeared the system had worked properly. However, for the life of me, I can’t understand why nothing has been, or will be, done with regard to the Robidas hit. Is that not precisely what the NHL is trying to get rid of?

In this case, I find it hard to believe there wasn’t a long and difficult discussion amongst those paid and deemed worthy to evaluate questionable plays and dole out the appropriate punishment. That play must have been analyzed over and over and from every angle possible. To think that, at the end of the analysis, a group of professionals deemed the play un-suspendable is nothing short of a miscarriage of justice.

2. Taking A Look Around

I don’t often do this, but indulge me as I paint a picture… Before the season began, if you had told Canucks fans (and management for that matter) that their favourite team would be in the thick of the Pacific Division and 2 points up with 2 games in hand on the last playoff team in the Western Conference, you might have been laughed out of the room/building/area code. Oh, and if you added in that was after a three game losing streak, you might have been cast as an outsider, arrested for fraud, or likely a combination of the two.

As it stands now, the Ducks are setting the pace in the Pacific (45 pts in 31 games), and the Central Division is a dogfight with Chicago, Nashville, and St. Louis all within a point and game of each other. Many (including myself) thought the Canucks had an outside shot at one of the two wild card spots being their ticket to the postseason. That may still end up being the case (regression is a cruel mistress), but with a win tonight, the Canucks can reestablish their impressive position in the standings.

If you’re still not convinced, just take a look at the Western Conference playoff picture anyway… Why? It’s hilarious, that’s why. The Jets, Flames, and Canucks are all currently in a playoff spot. Oh, and the Oilers are tied for last place in the NHL.

Here’s a quick look at where the Canucks currently stand in some of the more recognized categories of advanced statistics (all at even strength, as is customary):

While we’ve been led to believe that outstanding possession statistics drive success, especially over the long term, it’s hard to argue that looking at some of the current standings. Pittsburgh and Anaheim (two of the top teams in the league) have strikingly mediocre Corsi numbers, while Carolina and Los Angeles (two teams currently outside of the playoff picture) have relatively decent Fenwick numbers. It will be interesting to see what happens to the Canucks once Kassian and Hamhuis return, as both are generally strong possession players.

As for the PDO, it doesn’t get much closer to the expected outcome than that. The Canucks have a relatively high shot percentage of 9.45%, but their on-ice save percentage is a paltry 90.36%. So, while that shot percentage may regress slightly, one can only image the Canucks goaltending will get better in time.

Frank Corrado and Nicklas Jensen were sent down, while Alex Biega was called up from Utica and will be a healthy scratch. Derek Dorsett took a personal day on Friday for birth of his first child, but will to play tonight.

Big congratulations to @Twigy15, who missed practice yesterday for the birth of his first child, Dylan! pic.twitter.com/RMjTCuDwYP

Head coach Willie Desjardins will be shaking his lines up tonight. Jannik Hansen moves to the first line, Radim Vrbata to the second line and Chris Higgins to the fourth line.

I’m always excited to see Original 6 teams roll into town. Sure, there will be a few more dissenters amongst the crowd in Rogers Arena, but there is usually some added incentive for the home team to perform, especially with the large audience and national stage. The Rangers are just as well rested as the Canucks, and are even coming off a 4-3 victory over the Pittsburgh Penguins. I think we’ll see a steady Miller between the pipes against a familiar foe and a reinvigorated attack from the top two Canuck lines. Final Prediction: 4-2 for the Canucks (with an empty netter).

“Can I have your autograph?”