The Vancouver Canucks are in Music City to face the best team in the National Hockey League. Yes, you read that right. It’s the Nashville Predators.

The Canucks will be looking to rebound after losing their past two games to the Florida Panthers and Calgary Flames, scoring a total of one goal in the process. I truly hated having to type that…

After a dynamite start to the 2014-15 season, Vancouver is coming back down to earth and their record since December reflects this. Although still in a decent position in the Western Conference and with games in hand on the competition, Willie Desjardins and his boys will need to pick up the pace significantly over the remaining months in order to avoid another free-fall into oblivion. If they do end up going down that route, at least it’s a strong draft year!

But despite all the doom and gloom that circulating throughout the major media outlets these days, it’s still early and every team has their struggles throughout the season. The Canucks still have time to find what’s been missing (*cough* a second line *cough*) and right the ship. A good start would be to beat the Nashville Predators who have quickly become one of the best teams (points-wise) in the NHL while playing in the toughest division in hockey.

The Predators bid adieu to long-time coach Barry Trotz following another disappointing season that saw Nashville miss the playoffs for the second consecutive year. It appeared that the unrelenting defensive structure employed by Trotz wasn’t going to fly anymore so a new voice was brought aboard: Peter Laviolette. 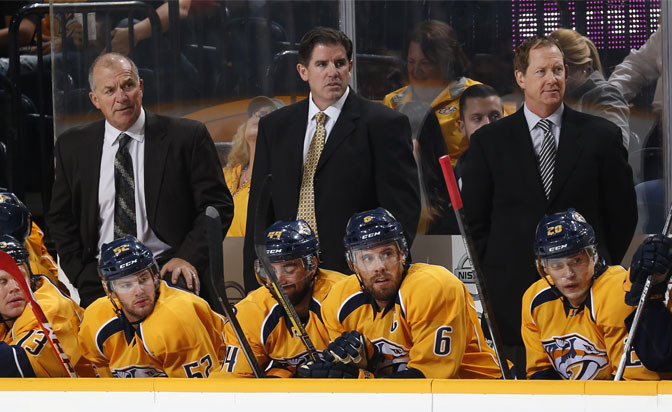 To say the first half of his tenure has been a success would be a massive understatement.

Here’s the thing about the Predators though: not much has changed with their personnel.

Of course, the Predators always have defensive stalwart and any typical Canuck fan’s dream, Shea Weber. That along with goaltender Pekka Rinne will usually help any team stay competitive regardless of who makes up the rest of the team.

But perhaps the biggest difference makers this season are a rookie and a greasy looking castoff: Filip Forsberg and Mike Ribeiro. 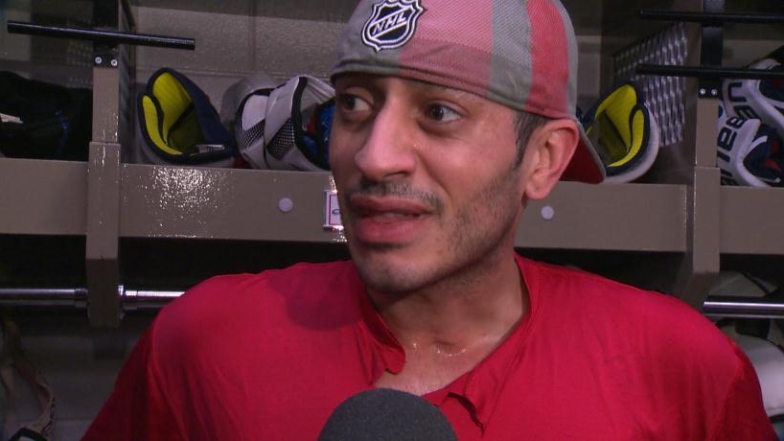 Forsberg and Ribeiro currently lead the Predators in points with 38 and 36 points respectively. You can obviously see the influence that Laviolette has had on the offence of the Predators. The top Preds forwards would struggle to hit 40 points under Barry Trotz’s defensive structure.

Thankfully for everybody, long gone are the days where Nashville would sit back and wait to see if an opportunity arose. If not? Great! Overtime and Shootouts are a crapshoot anyways!

I hear that apparently, they play to win the game now. 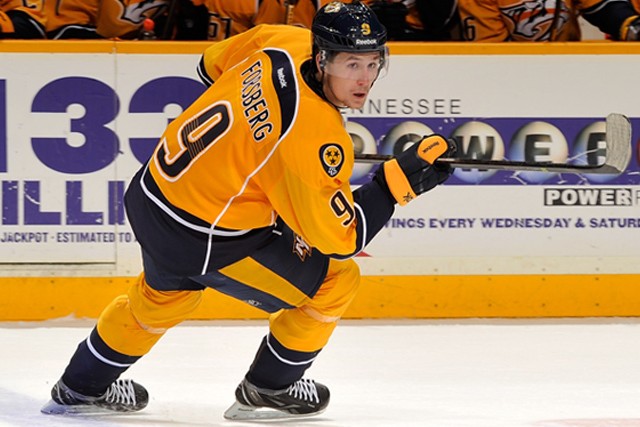 Sometimes, it hurts my brain to think about how the Predators were able to steal Filip Forsberg from the Washington Capitals for Martin Erat. And not even for a full season of Martin Erat. It was like 62 miserable games of Martin Erat and then done. Why would they do that?!

Forsberg has been a revelation this season and is guiding an offence that is just starting to find the light after roughly 15 years of darkness. If he is not the leading candidate for Rookie of the Year, he is definitely one of the stronger candidates among an excellent crop of young talent.

The Canucks defence will have to make sure they focus on Forsberg and not give him too much time and space to be creative or he will burn you quickly.

2. The Second Line REALLY Needs To Win This Game 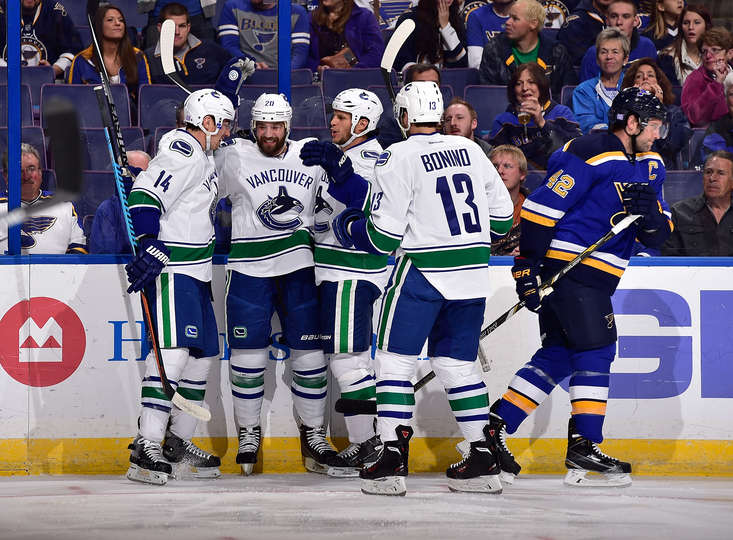 Unfortunately, being that the Predators have home-ice advantage (final change) and have Shea Weber as an employee, the Sedins will be very preoccupied throughout this game. Not to trash the Sedins, but when the bigger and better defencemen in the league are able to focus on them for the entire game through favourable matchups, there isn’t much the twins can do offensively.

This is where is it absolutely crucial that the second line consisting of Nick Bonino, Chris Higgins, and Alex Burrows break through their recent struggles and push this team offensively against the Predators. Like I said, with Shea Weber on your back, there really isn’t much you will be able to do. Mostly because of the imitation factor because he is a monster.

There was some more good news for Canucks fans on Monday as word dropped that injured defenceman Dan Hamhuis is nearly ready to play after suffering a torn groin almost two months ago.

#Canucks Dan Hamhuis: "Wouldn't say it's ready for tomorrow but for hoping (to return) some time on the trip."

It doesn’t seem too long ago that his injury happened, but man alive have the Canucks ever missed his presence on the blue line. Apparently Hamhuis is now feeling stronger than ever as well thanks to some excellent training during the injury.

It’s a shame that Hamhuis wasn’t ready for the game against Nashville considering he began his career in the Music City. Regardless, Hamhuis is almost ready to go and that should be music to the Canucks’ ears.

It appears that Willie Desjardins will juggle his lines back to normal as Radim Vrbata resumes his “All-Star” season alongside Henrik and Daniel while Alex Burrows drops back down to purgatory with Nick Bonino and Chris Higgins:

Chris Higgins is really good. Really good. Oh who am i kidding… I just really don't like Kassian.

Bo Horvat was absent from Monday morning’s practice (maintenance day) so Linden Vey was placed between Derek Dorsett and Jannik Hansen on the fourth line. Don’t expect any other changes to the lineup barring any last minute two-stepping injuries.

*Update: Miller’s still sick, so Lack will start in net.

The Nashville Predators are on a three-game winning streak, while the Vancouver Canucks have lost two in a row.

Conventional wisdom suggests I should probably go with the Predators on this one, but my first instinct was to choose the Canucks to win by two goals. And who am I to disagree with my first instinct?

Plus if Vancouver does pull it off maybe, just maybe, we’ll get to see an appearance from Carrie! 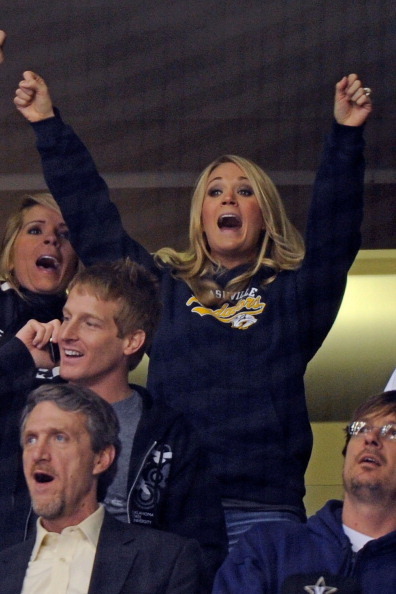 I know Carrie! It’s exciting being featured on Vancity Buzz!

P.S What’s wrong with that guy on the cell phone? CARRIE UNDERWOOD IS RIGHT BEHIND YOU! PAY ATTENTION TO HER!