On Thursday night, the city of Vancouver welcomes a familiar face back to Rogers Arena as Roberto Luongo and his Florida Panthers are in town to face the Canucks.

Vancouver is coming off of a hard fought battle with the New York Islanders on Tuesday night in which the good guys prevailed 3-2 over their 1982 Stanley Cup rivals. Here are the highlights:

After finally finding the gumption to shuffle his lines a little bit, coach Willie Desjardins appears to have pushed the right buttons with his team once again as the Canucks are now 5-1-1 over their last seven games and now have the opportunity to earn some more points with the Panthers in town.

Normally, a match between Florida and Vancouver is nothing to write home about. It’s usually a fun opportunity to visit with former players as these two franchises only seem to trade with each other, resulting in no substantial improvements on either side. Well, except when Luongo is involved. Then whoever gets the goalie seems to win the trade (sorry, Shawn Matthias). However, Thursday night will obviously be a bit more special thanks to the return of an old friend.

I'm looking in my calendar and see that we're only a couple days away. Should I prepare the bunk bed? #stepbrothers #dinnerdate? @strombone1

The Florida Panthers are having something of a renaissance this season (Gee, I wonder why…) and are hopefully poised to jump past the Boston Bruins and Toronto Maple Leafs into the 8th and final playoff spot in the Eastern Conference once they make up their three games in hand.

Other than Luongo, the Panthers are carried by some of their youngest players, led by newly signed Nick Bjugstad and 2014 First Overall Pick Aaron Ekblad. Ekblad has been especially impressive, currently sitting at 22 points which for an 18 year-old rookie defenceman is incredible. Ekblad should probably be getting more recognition for his inaugural NHL season but unfortunately, he plays in relative anonymity in Florida so we are stuck with hearing about Johnny Gaudreau every 20 seconds. Those are the breaks…

For the Canucks to prevail on Thursday night, they will have to look past all the subplots associated with this particular game and keep attacking a relatively weak defence corps. I mean, Shane O’Brien is probably playing so what does that tell you?

Panthers GM Tallon on Shane O'Brien: "You like to give guys second chances. I wasn't exactly an angel myself. He's been a model citizen."

Good on you SOB!

1. Win Those Games in Hand

Both the Vancouver Canucks and the Florida Panthers are in the midst of a dogfight for playoff positioning in their respective conferences. However, both teams have a slight advantage over the competition as they hold multiple games in hand. The Canucks in particular are looking good in the Western Conference. 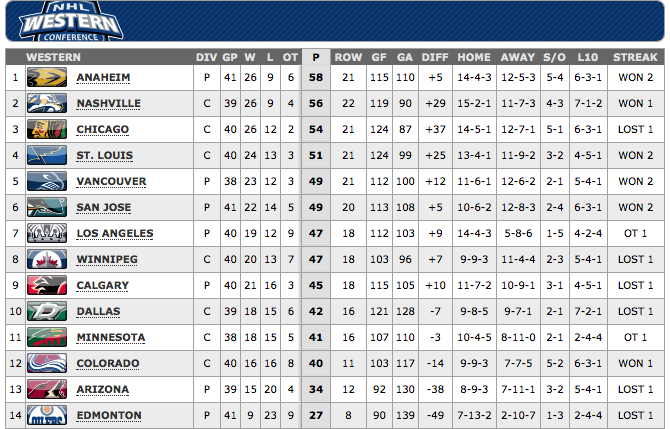 I’m not sure how this is possible, but notice how Vancouver has the best goal differential in the Pacific Division. Who would have thought?

Although Vancouver is looking pretty strong, sitting in the 5th playoff position with games in hand, their position is still precarious as a simple and common three losing streak likely means they would drop out of the playoffs entirely.

Thanks to the three-point games that are only going to increase in number as the season wears down, the fight for a playoff spot will likely come down to the last few games for Vancouver. At this point, it’s incredibly important for the Canucks to gain as many points as possible with their games in hand to ward off the Jets, Flames, and Stars who will be nipping at their heels for the rest of the season.

2. Vrbata on the Second Line

Radim Vrbata was supposed to have moved down to the second line against the Islanders on Tuesday night but was instead struck with a sudden case of the flu. Ironically, it was the second line consisting of Chris Higgins, Linden Vey, and Nick Bonino that drove the Canucks to victory.

Should be noted, Vrbata's excellent season continues. Sparks 2nd line scoring by joining it then replacing himself with Vey for the night

It was all part of Radim’s plan. This guy is clinical!

Despite their recent success, I doubt Willie Desjardins will stray from his original plan of attempting to jumpstart his second line by adding Vrbata into the mix. I’m a little skeptical about the plan though as I feel the problem with this line is that the chemistry between Nick Bonino and Chris Higgins has died. Multiple times.

Vrbata was credited early in the season with reinvigorating the Sedins and although their production seems to have dropped off a bit as of late, Vrbata as the shooter on the line is still dangerous proposition. I’m thinking Desjardins sees the same potential for the second line as Nick Bonino is an underrated passer. 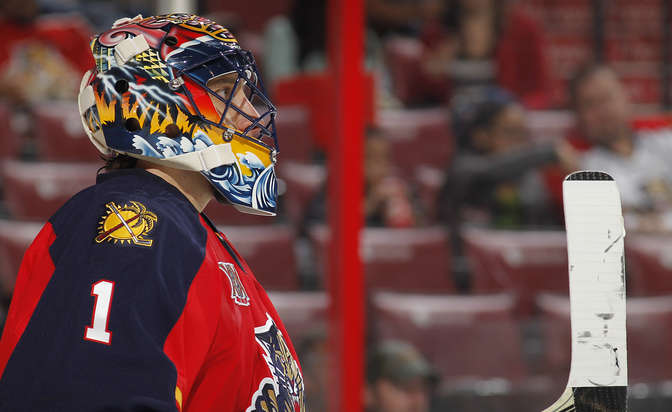 I’ll keep this short and sweet.

Not that I’m worried about the reception that Roberto Luongo will receive from the faithful at Rogers Arena, but I just want to reiterate that if you are going to the game on Thursday night, make sure you be a part of the gigantic ovation that Luongo deserves.

Forget about how everything went down with the trade demands. Forget about how John Tortorella didn’t start Luongo in the Heritage Classic. Forget about those games in Boston during the 2011 Stanley Cup Finals. Just remember Bobby Lu as he should be remembered. The best goaltender in Vancouver Canucks history.

Despite their victory over the New York Islanders, the Canucks will most likely see some changes with their lineup as Brad Richardson (lower body) and Radim Vrbata (flu like symptoms, meaning he had the flu) are set to return.

#canucks coach Desjardins says he thinks both Radim Vrbata and Brad Richardson will be available for Thursday's game vs. Florida.

Despite scoring what stood as the game winning goal against the Islanders, Linden Vey is in danger of receiving the boot. And expect Miller to get the start even though Luongo vs. Lack practically writes itself.

The Canucks are starting to look good again and I fully expect that to continue against the Panthers. Even though I would love for the game to go scoreless into a shootout, Luongo is suddenly good at those now so I would avoid that one.

I’m thinking that the Canucks will indeed pull out the victory, but hopefully by a score of 1-0 with Luongo making 72 saves.

No matter what happens on Thursday, here’s to you Lu: 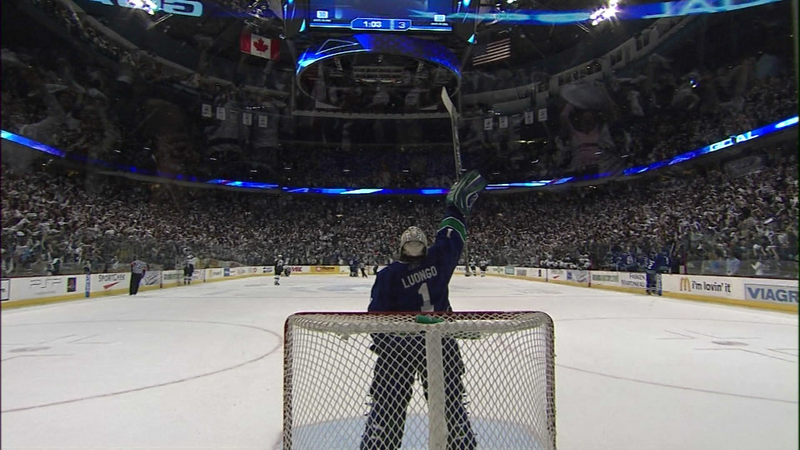