It may have been against the lowly Calgary Flames, but the Vancouver Canucks started on a positive note Wednesday evening, dispatching their Pacific Division rivals by a score of 4-2.

Willie Desjardins and the Vancouver coaching staff rolled four lines (seriously) on Wednesday night, with less than a 5 minute gap between Edler’s ice time (22:24) and that of Sbisa (18:34). The Edmonton Oilers present another stern test for a Canucks team that needs to beat inferior opponents as often as possible if they have any hopes of playing meaningful hockey games in April.

More importantly, Saturday is free beer night at Rogers Arena! Everyone in attendance on opening night (that is of legal drinking age presumably) will receive a complimentary Budweiser or Shock Top beer (or Pepsi/water if you prefer).

Both the Canucks and Oilers started their respective campaigns against the Flames, but with differing results. While the Canucks outplayed the Flames on Wednesday night and won their eighth consecutive game against Calgary, Edmonton pelted backup Karri Ramo with 40 shots, but only managed to solve him twice, falling 5-2. Oilers head coach Dallas Eakins may have said it best after their game: “If we (outshoot teams 40-26) every night, we will have a very, very good season.” However, someone should probably remind him they were playing the Flames… In any case, games against Edmonton are almost never easy, as evidenced by the penultimate Canucks regular season game last year, so Vancouver should be prepared to play a full 60 minutes again in their home opener tonight. 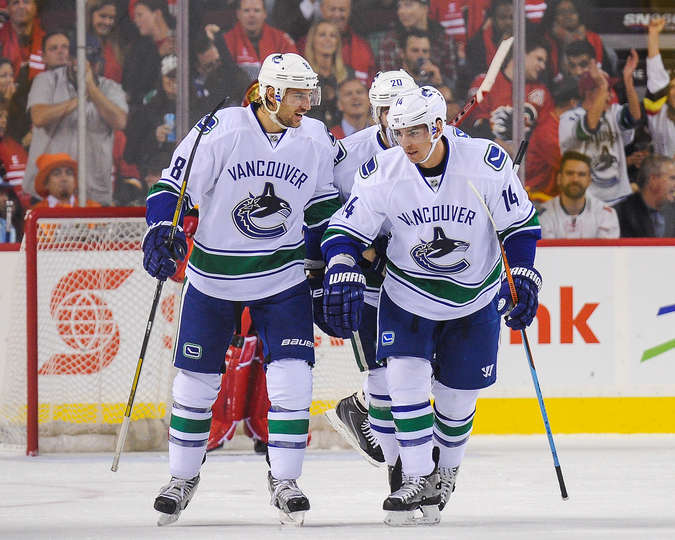 As mentioned, Desjardins wasn’t shying away from playing all four lines on Wednesday night against the Flames. “Rolling all four lines” is becoming a hot topic for coaches and front office management around the NHL in the wake of balanced, deep teams like Los Angeles, Chicago, and Boston (shudder) winning the Cup in recent years. While it may have been against the Flames, it’s still encouraging to see Desjardins staying true to his word by deploying every single player in the lineup within the last six minutes of a one goal game. That was capped off by one of the more impressive empty net goals you will ever see.

(Side note: Mike Johnson and I got really excited watching this)

It’s clear from the first game that Desjardins expects Tanev and Edler to be the shutdown pair for the Canucks. While Edler may have had a poor giveaway leading to the Hudler goal, and was caught in a bad pinch on the Paul Byron/Johnny Gaudreau 2-on-1, he played an effective game. In fact, according to War On Ice (an excellent #fancystats resource), both Edler (8) and Tanev (7) still managed to be among the team leaders in Fenwick +/- regardless of starting in the offensive zone only 40% and 29% of the time, respectively. Admittedly, it is a small sample size, but it works both ways. It’s unlikely Edler will repeat his league worst -39 if he continues to generate positive possession statistics.

Well, when Alex Burrows deflected a Dan Hamhuis shot past Jonas Hiller, one could be forgiven for letting out an exasperated “FINALLY!” In what was a well documented drought last year, it took 36 games, 44% of a calendar year, or 160 days for Burrows to eventually score his first of the season on March 12th against the Winnipeg Jets (for the record, he scored two in that game). While it hasn’t been been that long since his last goal (that’s even including an entire offseason by the way), it was a relief to see Burrows get off to a strong start this season. To be fair, last year was something of an aberration for Burrows as he was inundated with injuries, including an opening night broken foot and a shot to the face in December. All in all, he missed 32 games and struggled when he did return to the lineup.

Leading up to this season, Burrows was among those discussed as “bounce-back” necessities. While playing on the second line with Chris Higgins and Nick Bonino instead of the first line with the Sedins will obviously impact his point total, hopefully potting the first goal of the Canucks season is symbolic enough to keep the media, Twitter world and monkeys off his back. Oh, and he managed to throw the body around too!

There are countless coaches out there that, when pushed for comment before a game, will spout the seemingly recorded monologue regarding how important it is to “get off to a good start”. They’ll say it before periods, games, playoff series, and full seasons. However, clichés exist for a reason. It is important for teams to start well, and hockey is no exception. Last season, teams that scored first won almost 69% of those games. While the Canucks were outliers in that category, winning only 55% of the games in which they drew first blood, I doubt you’ll get Willie Desjardins to say he’d like the team to give up the first goal. The Canucks scored first on Wednesday evening and never trailed in the game, hopefully initiating a new trend for a Canucks team that finished 27th in the league in winning percentage after scoring the first goal in 2013-14.

In addition to the team starting the season well (with a win), starting that game well (with the first goal), it’s obviously important for individual players and lines to start out the season on a positive note. Media and fans alike are heavily anticipating Zack Kassian’s continued improvement this year, as well as the fit between newcomer Radim Vrbata and the Sedin twins on the top line. Well, both players scored their first of the season against Calgary. Kassian found his going to the net and grabbing a juicy rebound, something that Jim Benning (and everybody else in Vancouver) is expecting (read: hoping) to see out of the big, young winger this year. As for Vrbata, he and the Sedins looked dangerous all night and the chemistry among the top line is palpable.

Your random (not so fancy) stat of the day: 13. That’s how many opening night goals Radim Vrbata has scored, who just so happens to be the leader among active NHL players in that bizarre category.

While Bo Horvat is still day-to-day and Chris Tanev is also nursing an undisclosed injury after Wednesday night’s game, according to Willie Desjardins, Tanev is hopeful to start tonight (game time decision). Both Frank Corrado and Kevin Bieksa participated in full practice with the team yesterday, before Corrado was sent to Utica. Expect the Canucks to ice the same lineup that won on Wednesday.

For the second consecutive year, the Vancouver Canucks will play their first home game of the season against the Edmonton Oilers. The core group of players collected by drafting in the top ten for the last 4 years is a formidable one. While they have yet to put it all together in oil county, most believe it’s only a matter of time before this team switches it on. Personally, I don’t think they’re deep enough defensively to evoke enough positive change and if you look at the past 5 years, the Oilers are only 3-10-1 in Rogers Arena. I’ll take the Canucks at home by a score of 4-1.