The Canucks pulled out a miraculous win against San Jose on Thursday and now make their way down the California coast for a date with the Stanley Cup Champion Los Angeles Kings.

The Canucks are starting to make believers out of some.

Vancouver has had a successful start to the season, currently second place in the overall standings, but the Canucks have a lot to prove in California. They edged the Sharks on Thursday, but were outplayed.

They will be looking for a 60 minute effort on Saturday night.

Severely outplayed and outshot, the Canucks were able to barely eek out a win in San Jose, but the trip gets even harder now that they make their way to L.A. The defending champs have had an up-and-down start to the season, which included a loss to the lowly Carolina Hurricanes, but they always seem to step up their game whenever the Canucks are in town. This should result in the usual intense game between these two Pacific Division foes. 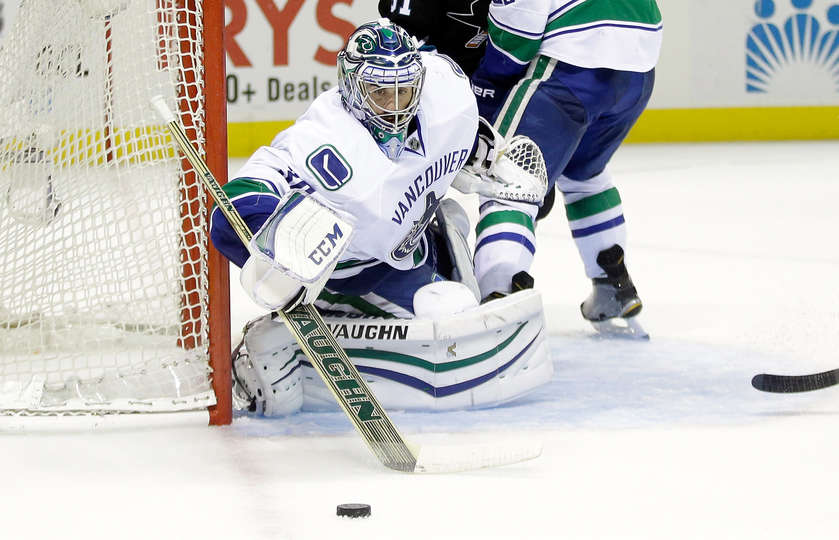 Ryan Miller has given the Canucks everything they could have hoped for when they signed him to a 3 year, 18 million dollar deal this summer. He is cool, calm and collected in the net, making difficult saves look routine. But the Canucks are not going to continue with a steady diet of the Edmonton Oilers all season and are going to start playing good teams on a regular basis. He will need to continue to show that he is worth everything the Canucks have invested in him.

I have always been a Ryan Miller fan, but he is even starting to exceed my expectations. Suddenly, the team mandate to make the playoffs doesn’t seem as far-fetched (knock on wood).

2. Canucks nation on the road

Every time the Canucks make the trip down the California coast, a contingent of die-hard fans follow them. Unlike the east coast teams, that are a bus ride away from each other, the Canucks have no close rivals. Thus the California trip becomes the ‘go-to’ trip for fans looking for that experience.

Due to cheap ticket prices, the lower bowl at the Staples Center and Honda Center are quickly filled up by rabid Canucks supporters. Hopefully this year the Canucks will be able to give their traveling supporters something to cheer about, as last year there wasn’t much other than moral victories. Personally, I have made the trip down to Southern California, so if you’re at the games, send me tweet (@ryanbiech) and let’s meet up for some high fives (editor’s note: ask Ryan to buy you a beer too).

With Zack Kassian, Tom Sestitio and Radim Vrbata all potentially out with various ailments, the time has come for the prospects of the Canucks to establish themselves. This is a huge opportunity for Jensen and Horvat to show that they belong in the NHL and that the Canucks need to seriously consider making room for them permanently. So far Horvat has been given a chance to succeed, and hopefully that is the case for Jensen too.

This year is the first year in a long time that the Canucks have been able to recall their former first round picks as injury call ups and not journeyman NHL’ers like Benn Ferriero. If this is the change that was promised over the summer, then I am excited for the future.

Tom Sestito is injured, while Yannick Weber will be a healthy scratch.

***Update: Ryan Miller gets the start in net. Radim Vrbata is good to go while Zack Kassian is injured (leg). Brad Richardson missed the game day skate and seems unlikely to play. If Richardson is able to suit-up, Jensen will probably sit.

Here is how the Canucks lined-up at the morning skate:

As for the Kings, they look to be in some salary cap trouble:

The #LAKings will only have five defencemen vs. #canucks tomorrow because they are short $160 in cap space to call someone up. What a world.

This is a tough one to predict, because if the Canucks get the Cup winning Kings of last year, then they are in trouble. But if the Kings of this season show up, the Canucks should be able to steal two points. The answer lies somewhere in the middle. The Kings aren’t in Cup winning form yet, but they should still be good enough to squeak out a 3-2 win.

See you at Staples Center!