After a thrilling overtime victory (finally), the Canucks will continue their homestand tonight against another Pacific Division rival: the Los Angeles Kings. Hampered by injuries, Vancouver appears to have been galvanized by an ugly 2-0 loss to Philadelphia last week, having picked up points in four straight, including three wins. They’ll look to continue that streak tonight against the division-leading Kings.

You’d expect injuries to two of your top centres, several starting defencemen, and starting goalie would have adverse effects on your record. Apparently, nobody told the Canucks this. In two consecutive 2-1 games, Vancouver has knocked off the reigning Eastern Conference champions Tampa Bay Lightning and a plucky Edmonton Oilers team.

Meanwhile, the Los Angeles Kings have remained above the fray in the Pacific amassing 44 points to stake themselves to a substantial lead, perhaps insurmountable. After a disappointing season last year that left L.A. outside of the playoffs looking in, it appears Daryl Sutter has his team once again set to make waves come hockey’s second season. 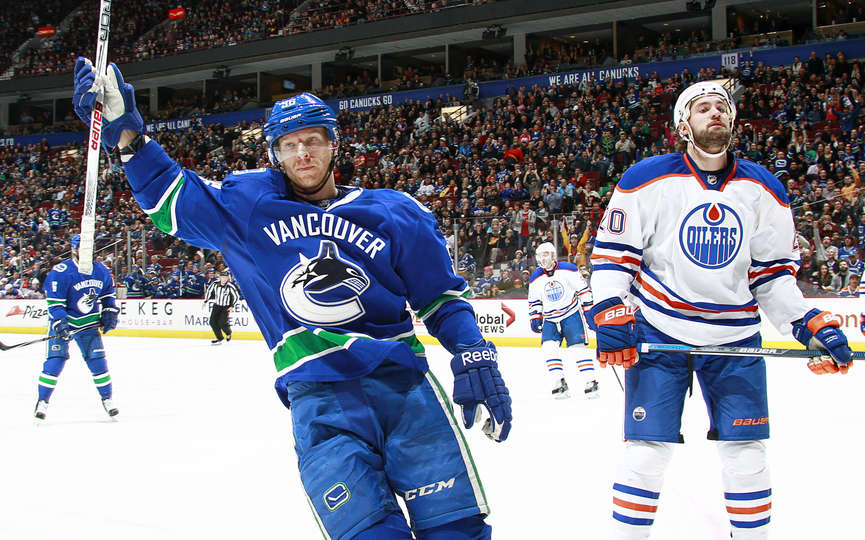 Say what you want about the “Honey Badger,” but Jannik Hansen has been dealing lately. On the top line with the Sedins, Hansen has 5 points in his last 4 games, including both Canuck tallies against Edmonton, including the game-winning slapper in OT obviously.

Ever since Hansen gave up trying to deke, things have been going so well for him…

If he hadn’t been busy taking a bite out of the crossbar, Hansen might have had another one finishing off this pretty passing play.

Hansen’s energetic and physical style of play seems to afford the Sedins plenty of time and opportunity with the puck, and giving the team’s best players more of the puck is never a bad idea.

Willie Desjardins has to be wondering what he did to deserve the numerous injury setbacks the Canucks have endured. Against the Oilers, the Canucks were missing 6 players from their opening night roster (Alex Burrows, Dan Hamhuis, Ryan Miller, Luca Sbisa, Brandon Sutter, and Chris Tanev), not to mention two of the three stars in that 5-1 win against the Calgary Flames (Sutter and Tanev).

Arguably the most concerning injury besides Chris Tanev is to a player that actually played on Saturday night.

Henrik Sedin didn’t sit down during his shifts off, didn’t take any faceoffs, and was stretching on the ice between whistles. A lower-body injury is currently hampering the Canuck captain and will hopefully be clarified later today.

Yes, it appears the days of the “mighty Pacific” are no longer (at least for now). To update that graphic, the Central Division has 137 wins, the Atlantic has 141 wins, the Metropolitan has 142 wins, and the Pacific has just 114 wins. Outside of the Kings (21 wins), no team in the Pacific Division has more than 17.

Fortunately (or unfortunately depending on who you speak to), these lacklustre performances have left roughly a team-sized window into the playoffs this year. If the Canucks continue to fail forward, they may just find their way into the postseason and settle for a mid-round draft pick once again, stalling their “rebuild on the fly” efforts.

Alex Burrows and Chris Higgins will reportedly draw back in tonight versus the Kings. Questions still surround the status of Henrik Sedin and his mystery lower body injury.

#Canucks Higgins (back) and Burrows (neck) both good to go Monday vs LAK. Wish I could help you on Henrik (hip?knee?tailbone?).

If there is one spot the Canucks have had success, it is against the rest of their division. In 9 games, Vancouver has gone 5-1-3. Only Arizona has a better in-division record.

That may not be enough tonight though. The Kings have had Vancouver’s number recently, with a 9-2-1 record since the beginning of the 2013-14 season. The division leaders increase their lead with a 3-1 win.