The home stand continues as the Carolina Hurricanes visit Rogers Arena tonight for a tilt against the Vancouver Canucks, and there be a buzz in the building tonight with the return of Eddie Lack.

This will be a sharp contrast from the Canucks previous outing against the Arizona Coyotes on Monday night. Rogers Arena was a morgue as the Canucks fell 3-2 to the Coyotes. The Canucks had plenty of compete, but simply could not overcome some horrendous defensive play. Shane Doan continued his hot hand, scoring 2 goals including the game winner.

The Carolina Hurricanes in many ways mirror the Vancouver Canucks. The Hurricanes are floundering with 39 points in 40 games and look to have a better chance at being a part of the draft lottery than participating in the playoffs. Carolina has a lineup constructed of intriguing young players mixed with some aging stars. Sound familiar?

Defenceman Justin Faulk has put together an impressive first half of the season. His 30 points (14 goals, 16 assists) lead the Hurricanes. Faulk has been steadily improving year after year with Carolina, but gets lost in the NHL shuffle playing in a small market.

To the surprise of many in Vancouver, Eddie Lack has not been able to supplant 31 year-old Cam Ward as the Hurricanes starting goalie. Ward has started 70% of Carolina’s games and has superior numbers to Lack’s so far this season. Lack started off slow, but has been on fire in his last 3 games. Look for Lack to put in an excellent performance tonight against his former team.

1.  The return of Eddie Lack 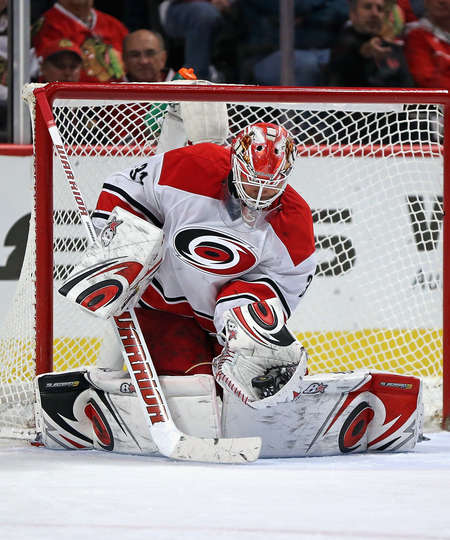 Jim Benning became enemy number one in the off-season when he traded popular netminder Eddie Lack to the Hurricanes for a 3rd round pick in last year’s draft (Guillaume Brisebois) and a 7th round pick in this year’s draft. Even to this day, many who follow the Canucks are still upset that Lack was the odd man out, preferring either Ryan Miller or Jacob Markstrom to have been traded.

The reality is that Lack’s gregarious personality won fans over in a manner that is rare. He is genuine, funny, a wizard with Twitter, loves tacos, and is an extremely hard-working goaltender. What’s not to like?

Expect a large ovation for Lack from Vancouver fans. I’m quite sure the “Eddie! Eddie! Eddie!” chant will be heard on more than one occasion.

The phenomenon of Eddie Lack’s popularity exposed an interesting characteristic of the Canuck fanbase. Known for being especially harsh on starting goaltenders and glorifying back-up netminders, Canucks fans took it to the next level with Eddie Lack. With Lack in the net making great saves, the crowd went wild. When Miller did the same, courtesy claps.

Part of me is happy the Canucks traded Lack before he got a chance to be the true #1 in Vancouver. Lack never had to feel the wrath of Canuck fans when their #1 goalie is going through a rough patch. This market can be absolutely horrific and even a player as popular as Eddie Lack would not have been able to avoid it.

Tonight, enjoy the return of Eddie Lack, but also cheer on Jacob Markstrom. Markstrom is putting up excellent numbers (better than both Lack and Miller actually) and appears to be finding his way in the NHL.

How can you call Daniel Sedin soft after what he did yesterday https://t.co/6I8VJMJA93 pic.twitter.com/WmmuYgyAc2

On Monday night against the Coyotes, Daniel Sedin lost a few teeth, got patched up, and then promptly went out and scored.

Simply put, Daniel and Henrik Sedin are the Canucks right now. Anyone watching the team on a daily basis, especially with the rash of injuries that has occurred, knows that as a collective group they should be at the very bottom of the NHL standings. The fact is, even when they lose, they are competitive because the Sedins keep them in games singlehandedly.

The Canucks very likely could have one of their worst seasons ever with the Sedins playing at their most impressive. Amazing and tragic.

3. Markstrom starting to figure it out 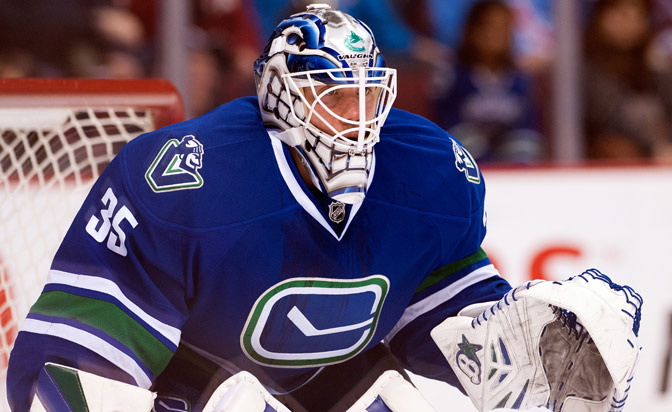 Jacob Markstrom was the goalie Jim Benning essentially chose over the aforementioned Eddie Lack. Benning wanted the veteran presence of Ryan Miller, and that meant dealing one of his two younger goalies. So far, Markstrom is proving Benning made the right choice.

Bigger, younger, more athletic, but raw. The knock on Markstrom prior to arriving in Vancouver was that he relied too much on athleticism and seemed to have confidence issues at the NHL level. It appears Rollie Melanson, Canucks goalie coach, has got Markstrom’s game more structured. The rebound control is still being worked on, but Markstrom has come a long way.

Sven Baertschi and Brandon Prust are back in the line-up returning from injury.

Based on practice, the lines should looks as follows:

It’s starting to become increasingly easy to provide predictions for Canucks games. Generally they lose and the Sedins dominate the scoresheet. This game though is a tough one. The Canucks rank 25th overall in the NHL in scoring while the Hurricanes sit 27th. Expect a low scoring game dominated, dare I say it, by the goaltenders. The Hurricanes take this one 2-1 and Eddie Lack throws tacos in the crowd when announced as the games 1st star.