The Canucks continue their Eastern Conference road trip tonight with a stop in the City of Brotherly Love. Vancouver has lost three in a row and are desperate for a win. Unfortunately, the Flyers seem to have turned their season around just in time for the Canucks to visit.

The Flyers struggled to start the season due to sub-par goaltending and shaky defence. Their offence has been potent the entire year and will likely give Ryan Miller and the Canucks defence a stiff test.

Despite losing last night to the Capitals, the Flyers have been better of late. Philadelphia has two of the top five scorers in the NHL in Claude Giroux and Jakub Voracek. They are supported by young players like Wayne Simmonds, Sean Couturier and Brayden Schenn, who all play that gritty but skilled type of game. The Flyers have six players with 10 or more goals, while the Canucks have only one (Radim Vrbata). 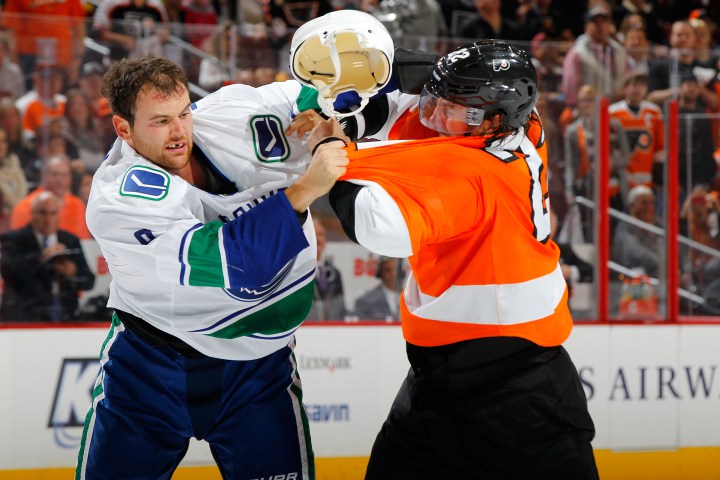 Since returning from injury, Zack Kassian has done nothing. He has looked disengaged, uninterested and just trying to not make a mistake. It’s hard to watch as he still occasionally shows those flashes of potential.

I have always been an advocate of playing Kassian in the top 6. Although he hasn’t earned it, I think that is what is needed to get him going. It is rumoured that Canucks management are shopping him, as Jason Botchford outlined, however with Kassian playing the way he is, it only hurts his possible trade value. The Flyers play a style of hockey that is perfectly suited for Kassian. Perhaps it will get him going for the Canucks, or maybe show enough that the Flyers would be interested in him?

2. Anyone want to score some goals?

The Canucks have lost three straight and have scored a total of 2 goals. In the early parts of the season, the Canucks offence was firing on all cylinders but that has abruptly come to a halt. Which Jeff Paterson nicely outlined here:

That is bad. Really bad.

The depth that the Canucks were raving about has quickly become non-existent. Hopefully tonight is the night where one forward can score a couple and ignite an entire line.

After two previous callups, Frankie Corrado has finally got into the lineup and has looked like he belongs. Corrado has the ability to get the puck out of danger in his own zone and consistently get his shot through to the net. It doesn’t seem like Coach Willie is sheltering him, as he has found his way up the lineup to play with Alex Edler in the third period of the last two games.

Since Corrado is currently the best Canucks D prospect, there may be some unreal expectations placed on him. However, he has shown so far that he can play in the NHL and should be playing every night. It will be interesting to see if Corrado will be the healthy scratch when Dan Hamhuis returns from injury.

With the loss to the Predators, it looks like Coach Willie is going to make some changes with Chris Higgins and Shawn Matthias switching spots. Expect Bo Horvat to return to his 4th line centre spot, after missing Tuesday’s game with the flu. Barring another injury, Linden Vey is the likely candidate to be a healthy scratch.

Maybe it’s because of what happened in Nashville, but I have a sense of pending doom about today’s game. The Canucks’ inability to score combined with the Flyers boasting some serious fire power feels like a bad combination. Hopefully I am wrong but I predict the Flyers will take this game 5-2 on the backs on Voracek and Giroux.

I really hope I am wrong.