Here we go again. Yet another chance to see how much the Vancouver Canucks can test the ever dwindling patience of its loyal fan base. Fortunately (or not) the Canucks are back in the friendly confines of Rogers arena and are set to play the team that set the standard they are trying so hard to avoid: The Calgary Flames.

I don’t even know where to begin with this one (my brain: how about the first period, idiot.). In what should have been a statement game, the Canucks failed to even show up against the Dallas Stars, the team directly in front of them in the playoff race.

Within 12 minutes of the first period, the Stars had a 3-0 lead thanks to Jamie Benn (assisted by Tyler Seguin), Tyler Seguin and oh yeah, Tyler Seguin. If you are thinking of blaming the goaltending of Eddie Lack for the dominant first period for Dallas, don’t worry about it. The net remains the least of Vancouver’s issues at the moment as they couldn’t ever muster enough motivation to get through warm-ups.

The second period wasn’t much help either, because it only took 2:20 minutes for Dallas to add to their lead. The fourth Dallas goal was scored by Alex Gologoski and assisted by, you guessed it, Tyler Seguin (this kid is one sick individual). Ryan Garbutt (Yes, Ryan freaking Garbutt) added to the misery of this game and all of a sudden it was 5-0.

All we could do at this point was laugh. And cry. Lots of crying.

But then, out of nowhere, Zac Dalpe scored on a late second period power play! No one cared though because Roberto Luongo was being hilarious on twitter. It was fun for a while but then it got a little depressing.

I just want to end this recap by saying Tyler Seguin scored again to complete the hat trick. Seriously man, you already helped steal a Stanley Cup from Vancouver. Leave us alone! At least we didn’t have to see an image of Timmy Thomas and his stupid grin. Go back to your bunker! 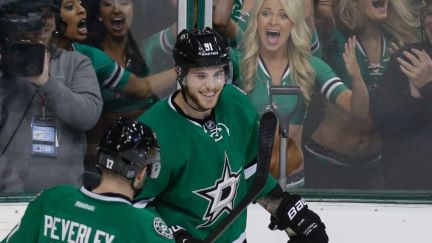 This kid is loving life in Big D.

As I mentioned before, the Vancouver Canucks and the Calgary Flames are linked together for all of the wrong reasons. The Canucks are desperately trying to avoid the fate of the Flames by making a concerted effort to get younger on the fly while remaining competitive.

Believing they still had a legitimate chance, the Flames waited about two years too long to deal away their veterans and ended up in the pit of despair they currently occupy. However, as tragic as their fate may be, at least they show up every night and play the game. Maybe this is just an advanced case of Stockholm Syndrome because I happen to live in Calgary, but the Flames deserve a lot of credit for how hard they play for their fans despite having little to no chance of competing for a playoff spot.

That being said, Saturday marks the first game between these two teams since John Tortorella ruined the season by storming into the Flames dressing room, presumably to have a calm discussion regarding Bob Hartley’s lineup decisions. Now that the playoffs are pretty much out of reach for both teams (not for you mathletes out there), this game could be reduced to an absolute gong show. If I may make a suggestion, I recommend watching this game on mute unless you feel the need to hear PJ Stock publicly soil his adult diapers.

With Zack Kassian’s suspension, Nicklas Jensen somehow managed to get a call-up despite being deemed “not NHL ready” only a week ago. Brad Richardson and Ryan Stanton are both day-to-day with injuries. Below is what the Canucks lines looked like in practice on Saturday. Eddie Lack gets his sixth straight start in net.

Easily one of the best tweets of the year.

I’ll put it on the record that I am all for writing off this season and getting into the best possible draft position, especially if it helps solidify the center position. Unlike Assistant GM Lawrence Gilman, I don’t think this season was an anomaly so it is time to rebuild on the fly. However, I do believe the Canucks are in a position to significantly improve their team over the summer and be back in the mix for the playoffs next year. Because this season is a wash, tank it and grab the best possible prospect available. It’s what the cool teams are doing.

Somebody forgot to tell Matthias the team doesn’t care anymore. Even though the Canucks lost 6-1, Matthias was a bright spot for the Canucks collecting no goals but getting seven shots on net (yup, he’ll fit right in…) and winning 9 of 14 draws. The Canucks may have a decent third line center in Matthias. However, what does that mean for Bo Horvat next year? 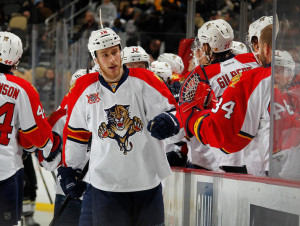 3. Play For the Fans

It’s become fairly evident that the Canucks have given up on their coach. Torts may not want to admit it just yet, but when you lose 1-0 and 6-1 to the teams directly in front of you in a playoff race, the team has quit. Even though I just advocated intentionally being terrible for the sake of a good prospect, I would still like to see the Canucks actually try to win a game this season. If you don’t want to play for Tortorella, that’s fine. At this point, most fans can understand the logic in that course of action. However, at least put some effort into the game for the sake of the people that are paying good money to see you play.

Torts pops a couple Zanax and the Canucks win 2-1.

I get beat up at Cowboys Casino in Calgary after the Canucks win.