The Vancouver Canucks get back to business Saturday night against the Calgary Flames in their first appearance on Hockey Night in Canada.

This is a rematch of the season opener on Wednesday, when the Canucks beat-down the Flames 5-1.

Being that I am a Calgary resident and having had to live through the Canucks losing to the Flames in the first round this past April, you’ll understand if I had a little spring in my step walking into work on Thursday morning:

But seriously, it was only the first game of the season and this is still a team with about three million questions left to answer. However, the Canucks certainly did their best to prove that the pre-season prognosticators who had them finishing the season at the bottom of the Western Conference were wrong.

The Flames are coming into this season with sky-high expectations thanks to a surprising season that saw them rise from a draft lottery favourite to second round playoff team.

Sure, the Flames got completely obliterated by the Anaheim Ducks. But let’s not let that ruin the narrative.

Calgary did their best to beef up this off-season, acquiring budding superstar defenceman Dougie Hamilton from the Boston Bruins.

Hamilton is just a piece of one of the stronger back-ends in the entire league. The Flames boast Mark Giordano, Kris Russell, Dennis Wideman, and TJ Brodie, once he regains his health. They do have Deryk Engelland, but he hasn’t been too much of a disaster just yet.

Much like Vancouver, Calgary still has some questions to answer and lots of developing to do before they are ready to take that next step.

The Canucks thoroughly embarrassed the Flames at the Saddledome on Wednesday night. I would expect Calgary to be ready to return the favour.

1. The Curious Case of Benjamin Hutton 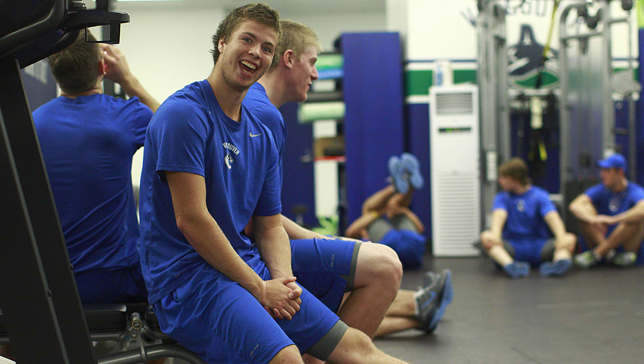 I’ve been dying to use that headline for so long. You have no idea.

But where did this guy even come from?

Yes, I know the answer is the Maine Black Bears of Division I NCAA hockey. But outside of Chris Tanev, you’ll have to forgive me if I have my guard up with Canucks Draft picks that are associated with the college ranks: 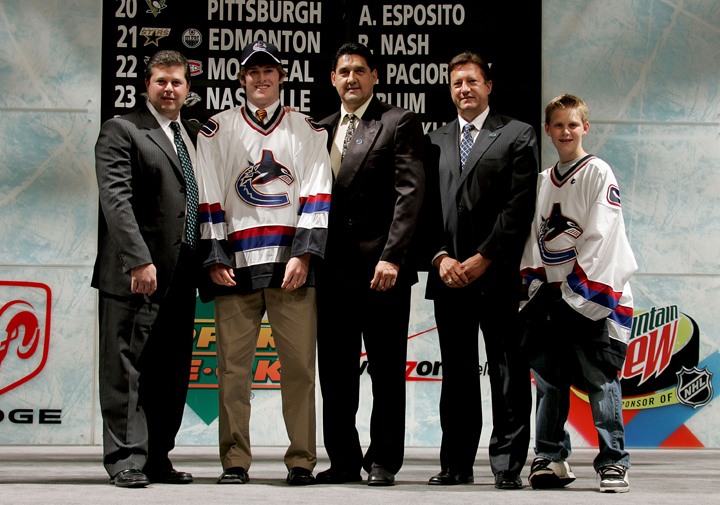 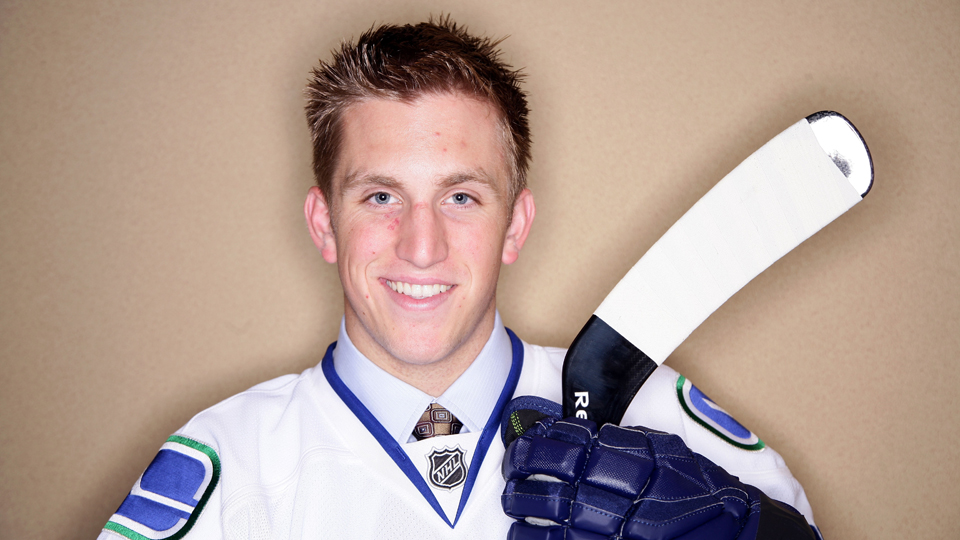 Enough has already been written about Ben Hutton’s ascent, often by writers that are much more credible than myself. But Hutton has been a revelation and even has Canucks players raving about him. Like, they are excessively gushing over this kid’s abilities from the back end.

From The Province’s Jason Botchford:

“You see (Hutton) skate it out of trouble, skate it out of his own end?” an amped up Jannik said. “We weren’t getting hemmed in. It’s so huge for us forwards, when the D can do that.

Sbisa on Hutton – "He makes my life easier." #Canucks

I doubt Hutton would say the same…

Ben Hutton has played so well in fact, the Jim Benning isn’t even worried about sending him down:

Benning says he doesn't foresee Hutton going anywhere (not being on #Canucks), "unless he really falls off or something."

Not to put too much pressure on the kid, but it’s going to be fun watching Hutton develop. If he has this much confidence after a handful of preseason games and one regular season game, I can’t wait to see what he’s going to try and pull as the season progresses.

2. No Home Debut for Virtanen 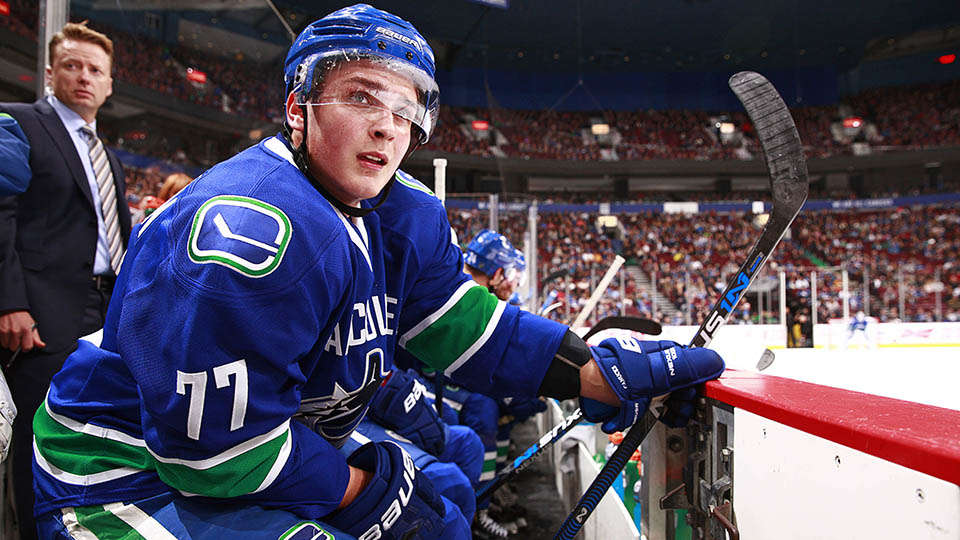 You could have easily assumed the lineup was never going to change, but admit it, you were hoping that Jake Virtanen was going to slide onto the Canucks roster for their home-opener.

Unfortunately, it looks like Willie Desjardins will be keeping his lines the same which means Virtanen (#18) will be watching from the press box.

As much as I understand the logic behind keeping him in the press box, I have to admit that I’m a little surprised because Desjardins seems to have a little sentimentality buried deep beneath his moustache.

If you can remember back to last November Desjardins, despite not trusting him at the time, threw Bo Horvat onto the ice in his first NHL game to take the opening draw against the Colorado Avalanche. For a rookie, that moment would have been gigantic.

In Virtanen’s case however, it looks like the Abbotsford native, whose parents will be in attendance, will miss out on opening night.

And it’s really too bad that it looks like it will shake down this way. I couldn’t even imagine what it would be like for Virtanen to hear his name and skate out onto the ice during the player introductions.

He’ll get his chance. It’s just a shame that it won’t start tomorrow.

3. Sutter and the Twins

I’ll admit, I wasn’t huge on the top line for the Canucks.

It was a very promising debut and the line only got stronger as the game went on. Being that Desjardins has the patience of a Kindergarten teacher (well most teachers…), this line will probably be sticking together for the foreseeable future.

I doubted it, but I will be willing to stick it out because Sutter brings a interesting element to that line: a right-handed centerman.

Desjardins isn’t scared to start the Sedins in the defensive zone and although that may hinder their offensive production, having Sutter available to take the draws on Henrik’s weak side could potentially help gain possession and move the puck up the ice a bit easier.

It’s looking like Willie Desjardins will be icing the same lineup as game one. When you beat a team 5-1 and everyone played fairly well, it’s hard to switch things up:

I’m riding pretty high from Vancouver’s win on Wednesday night. Mostly because the Canucks looked so much better than the Flames did after the first 10 minutes.

There are a lot of risks in home openers. The pre-game ceremony and player introductions pretty much negate the warmups and can cause players to lose focus.

Calgary on the other hand, will be coming into Rogers Arena with much less pressure on them and a taste for revenge. 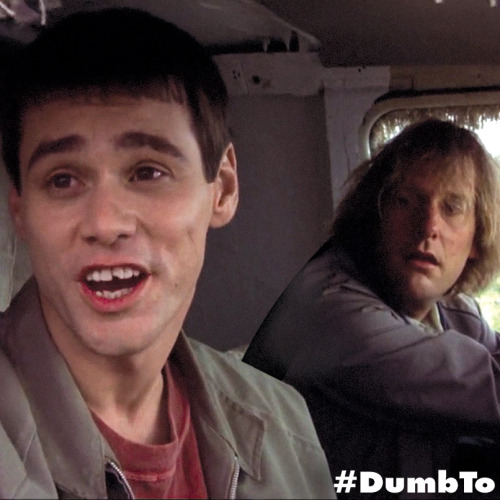