After an emotional game against the Florida Panthers and the returning Roberto Luongo, the Canucks will do battle with the Calgary Flames to finish up a five game homestand on a positive note (and above .500).

Although they sure played like it, one would be hard pressed to accuse the Canucks players of looking past Thursday’s contest what with the exalted return of Bobby Lu to Rogers Arena for the first time since being unceremoniously shown the door just before the trade deadline last year. On the other hand, playing the Flames continues to be a whole lot of fun for the Canucks lately, so maybe they wanted to get the mushy stuff over with and get back to collecting two points.

The Canucks have won nine straight against the Flames and since the beginning of 2010, Vancouver is 19-4-1 against their division foes. That, right there, is pure dominance. Unfortunately for the Canucks, the days where the Flames seemingly roll over and play dead are gone. Until recently, Calgary held one of the Western Conference wild card spots and are currently just 2 points behind Winnipeg and Los Angeles.

The Canucks have gone 2-2-0 on their current homestand and wouldn’t it be nice to pick up a win in their finale before hitting the road for five games? I think so too. 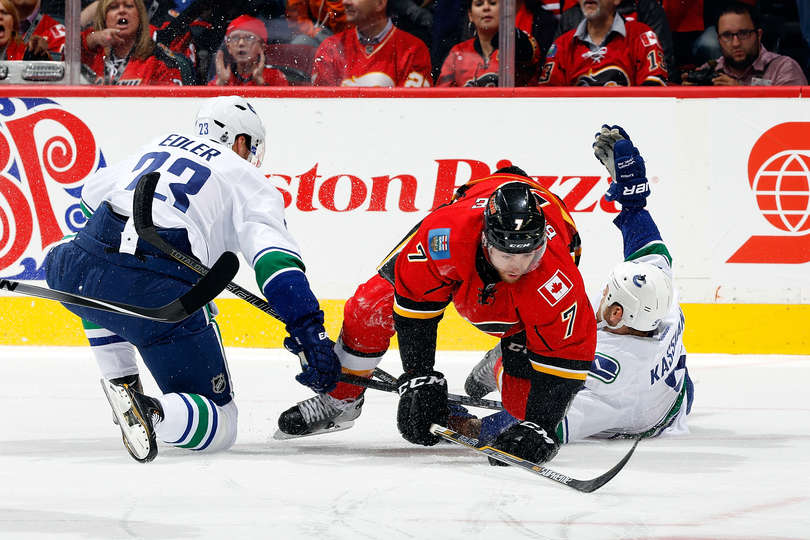 Not too long ago, many hockey pundits suggested that the newly formed Pacific Division was the toughest in hockey. Well, it’s a year and a half later and the title belt may have been dished out prematurely. Of the top 10 teams in the league, only 4 are from the Western Conference, and the Anaheim Ducks are the only Pacific representative. In the Western Conference, the Central Division has been impressive, with the surprise Predators, perennial powerhouse Blackhawks, and regular season warrior Blues all with 53 points or more.

Meanwhile, the Canucks sit 12th in the league, 5th in the Conference, and 2nd in the Division. One of the many knocks against the team last year was their abysmal records against the Pacific Division (12-13-4) and it was a major reason why they missed out on a playoff spot. Well, like it was in the good old days, if the Canucks can continue to win within their division, they’ll set themselves up for success in April. They currently sit at 10-3-2 against the rest of their division and they have a chance to push that win total to 11 this evening.

Thursday was the first game since the Rangers debacle that Ryan Miller’s save percentage dipped below .925. That’s a good thing. While it would have been nice to receive some offensive support, Miller has slowly rounded into form since mid-December. With a middle record of 4-2-1, Miller has looked collected and solid between the pipes.

The goalie talk winds will always swirl in Vancouver, but for now, it appears they’ve reached a manageable velocity. If Miller can continue his strong play (how many times have we heard that about an NHL goalie?), the Canucks can bolster their skating corps at the trade deadline and make a run for the playoffs. 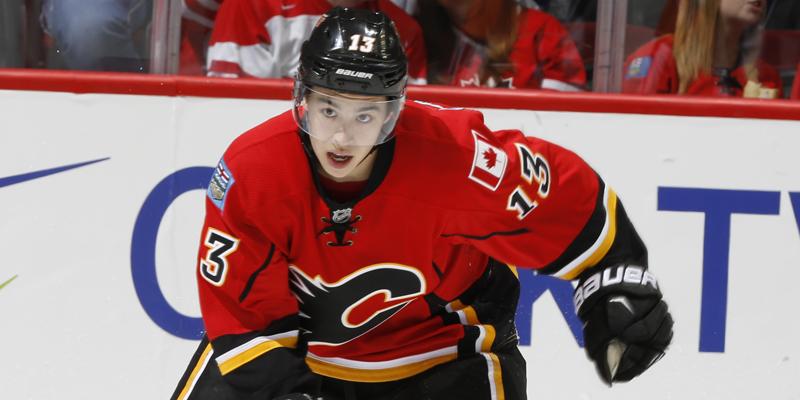 One of the more exciting storylines of this year has been the development and excellent play of rookie, Johnny Gaudreau. Despite his diminutive stature (5’9, 150 lbs.), which ranks among the smallest in professional sports in North America, Gaudreau has been fantastic. Amassing 31 points (13G, 18A), the NHL’s Rookie of the Month for December has been a breath of fresh in Calgary. He epitomizes what Bob Hartley, the rest of the coaching staff, and management are preaching. Hard work and steps in a positive direction will ultimately yield the desired result.

Not surprisingly, Gaudreau has had people tell him his whole life he’s too small to play in the NHL. Well, take a look… he’s doing it, and doing it well. However, the Calder candidate lock has put his head down time after time and worked to make the big show. Well, the Flames had some tough slogging in recent years and there is likely still some ahead, but if Gaudreau is a sign of things to come, then there is also a very bright light at the end of the tunnel.

Chris Higgins is expected to be back in the lineup after missing Thursday’s game with an illness. If Higgins plays, expect Lindey Vey to sit.

Desjardins was grinning when saying Corrado was a "maybe" for tomorrow's game. I'd say, after 3 recalls and crazy travel, he's in #Canucks

If Corrado slots-in, Yannick Weber is the most likely candidate to come out of the lineup. Only time (and the morning skate) will tell.

As for the injured Dan Hamhuis? He participated in full practice for the first time since his injury on Friday, and is ahead of schedule.

The Flames played the aforementioned Panthers in Calgary last night and should be prime for an early onslaught from the Canucks. Establishing pressure and minimizing mistakes early will go a long way to making sure the Canucks leave home on a good note. I don’t see any reason why I shouldn’t predict the Canucks’ 10th consecutive win against the Flames, so I won’t fight it. Canucks win 4-1 and Kassian picks up a Gordie Howe hat trick, endearing himself to Willie Desjardins and Jim Benning for the rest of the season.