The Canucks cannot get out of Vancouver quick enough!

The Canucks traveled to Calgary after last night’s debacle for a tilt against the lowly Calgary Flames.

Vancouver is coming off yet another disappointing home loss against the streaking Anaheim Ducks. Yes, the Ducks are truly “Mighty” again.

It was men against boys as the Ducks fairly easily handed the Canucks a a third-straight 5-2 loss. The Canucks’ home ice woes this season are puzzling to say the least. How can a team that is 3 games above .500 on the road be 4 games below .500 at home? Truly bizarre. 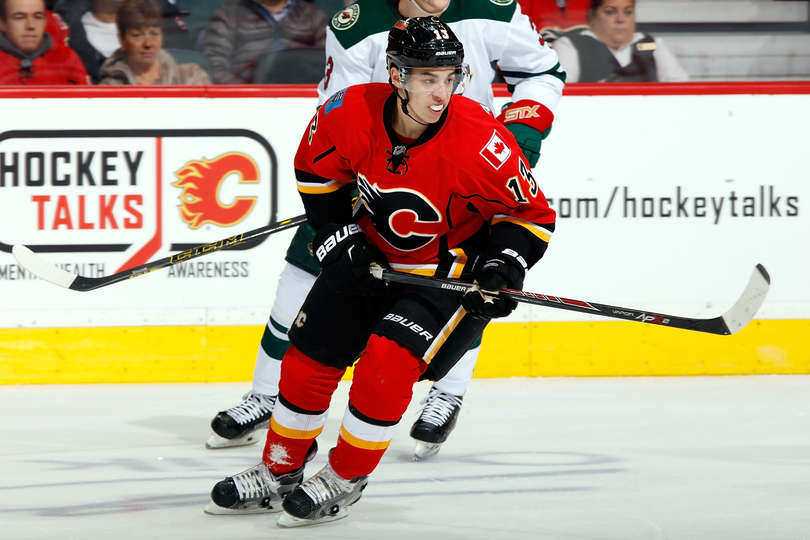 Last year the Calgary Flames were an aberration.

Bob Hartley was amazing! He isn’t.

The Calgary Flames grit and no quit attitude was unmatched! No, actually getting behind by three goals on a regular basis and coming back to win isn’t a sustainable recipe for success.

The Flames were a team on the rise! It really is too early to tell.

Make no mistake about it, the Flames have a very good, mobile defence and some great young forwards. Leading the way offensively are youngsters Johnny Gaudreau and Sean Monahan, but they also get tremendous production from defencemen Mark Giordano and T.J. Brodie.

Tonight’s contest between the Canucks and the Flames is a battle of the basement dwellers in the Pacific Division. With the Connor McDavid-led Edmonton Oilers looking capable of stringing some wins together, it appears that one of these teams tonight may very well find themselves at the bottom of the Pacific Division by season’s end.

There has not be a lot to cheer about with the Vancouver Canucks of late, but Jake Virtanen is providing some exciting glimpses into the future on a seemingly nightly basis.

If anyone doubted Virtanen’s NHL-ready size, it was on full display when he dropped Ryan Kesler on his keister. We have seen Virtanen drop players who are initiating hits on him, but it was pretty impressive to see how easily he did it against a strong player like Kesler.

Virtanen’s offensive game is not quite there yet, but we’ve seen enough from him with physical play and a quick release to have some real hope for the future.

Many questioned Jim Benning’s 2015 trade deadline acquisition of Sven Baertschi in exchange for a 2nd Round pick in last year’s draft. The criticism of this trade has ceased with Sven Baertschi showing strong signs why the Flames picked him 13th overall in the 2011 draft.

The Baertschi trade shows Canucks fans exactly the type of moves that can, if successful, expedite Vancouver’s rebuild.

3. The Canucks are scary bad

I could care less that the Canucks are struggling.

Let’s be honest. The Canucks lack of depth has been exposed with Alex Edler and Brandon Sutter out of the lineup. With both Edler and Sutter the Canucks are likely a playoff bubble team. Without them, they are a possible lottery pick favourite.

The Canucks simply are not a very good team at the moment.

Based on the woeful performance against the Ducks, don’t be surprised if Willie Desjardins changes a few things up. Jared McCann is likely to draw back in with Jacob Markstrom playing the second game of the back-to-back.

The team isn’t likely to have a full practice this morning, so we’ll have to take a guess at the lineup.

The Canucks are coming off another disastrous home loss against a very good Anaheim Ducks team. Both the Canucks and the Flames have plenty of motivation for tonight’s game. Vancouver will keep this one close, but run out of gas in the 3rd period. Canucks lose 4-3 and fans continue their realization that they aren’t that upset about it.