Pre-season hockey continues with the Vancouver Canucks taking their show on the road in Calgary. For the first time this pre-season, fans will actually see a Canucks road game.  Wednesday night the Canucks started their pre-season split squad-style vs the San Jose Sharks. The Canucks won 4-2 at home, but lost 5-2 in a game seen by close to no one in Stockton, CA. So odd in today’s NHL to have a game, even in the pre-season, with no television, radio play-by-play, or local media coverage.

In a bizarre twist of fate, the Canucks and Flames find themselves in similar positions in this pre-season. Both teams are coming off fairly horrid previous seasons with neither team making the playoffs and both teams have reason for optimism coming into this new NHL season. The Canucks are bent on righting the ship with an overhaul in management, coaching, and roster. The Flames have a group of young and exciting players. Optimism reigns in the pre-season. 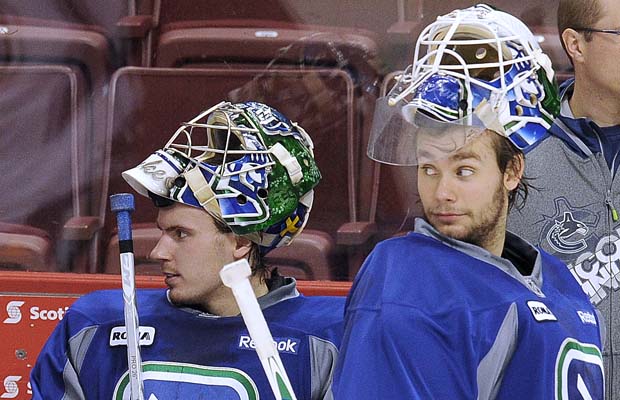 There has been much chatter lately about the Canucks 3 goalie problem. Eddie Lack looked very good in Wednesday night’s home game vs the San Jose Sharks and needs to continue to impress a new management and coaching group that seems not entirely sold on him.

2. Will Horvat and Shinkaruk continue to impress?

Bo Horvat and Hunter Shinkaruk showed well on Wednesday night in the split squad game vs the San Jose Sharks and it will be interesting to see if they can continue their fine play. It is hard not to be impressed by Horvat’s solid two-way game. Shinkaruk brings a needed scoring touch and sheer enthusiasm that is lacking in the Canucks lineup.

3. Will calm behind the bench lead to better results on the ice?

This will be our first look at Willie Desjardins behind the Canucks bench. The constant and vivid emotion of John Tortorella has been replaced by the calmness and professional approach of Desjardins. Will this filter down to the product on the ice? Tonight we get our first look into the Desjardins era.

Alex Edler replaces fellow defenseman Ryan Stanton on the injury front. Edler took a puck to the face 4 shifts into the Canucks Wednesday night matchup vs the San Jose Sharks. Canuck fans will have to wait another night to get their first glimpse of Ryan Miller between the pipes as he is once again a healthy scratch.

Here‘s how the Canucks will line-up in Calgary:

I have a reputation for picking the Canucks to win most of the time, but I never go with a road team in pre-season.  The Flames win this one, but the Canucks get the last laugh.  Willie Desjardins storms the Flames dressing room at the end of the game, pops Bob Hartley with a haymaker, and loudly proclaims, “THAT ONE WAS FOR TORTS!”