This is a battle between two struggling teams of late, with both teams desperate for two points. A win lets the Canucks breathe easier, while a loss could send the city of Vancouver into full scale panic mode. Needless to say, there’s a lot on the line.

This is the second meeting of  the season for the Flames and Canucks, with the Canucks winning the season opener 4-2. At the moment both teams look to end losing streaks in hopes of regaining and solidifying their playoff spots before the Christmas break. The Flames have assembled a fantastic group of young players like Johnny Gaudreau, Markus Granlund, Sean Monahan and TJ Brodie. They may have been a laughing stock for years but should be challenging for the division title within 2-3 years. 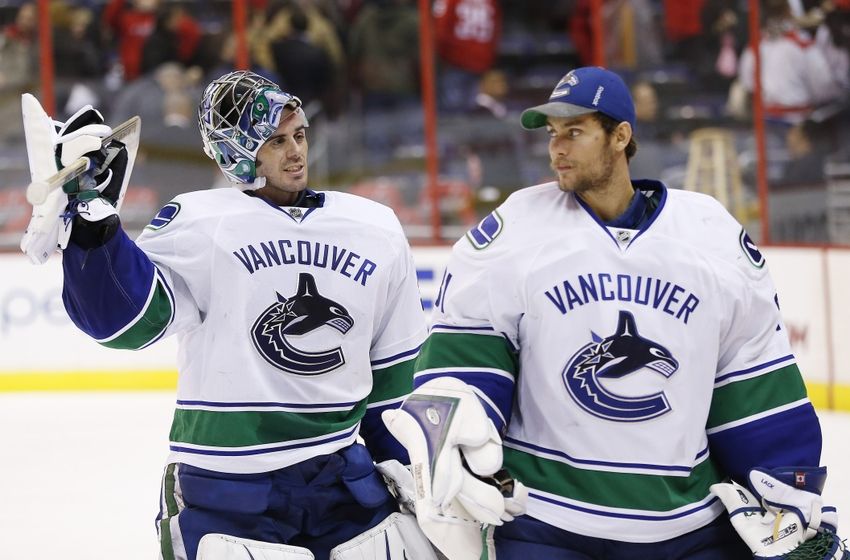 What would a Canucks season be like without a goalie controversy?

The story that never dies added another chapter on Wednesday when Eddie Lack made a ‘scheduled start’ against the Dallas Stars. This wouldn’t be a story if it wasn’t the only game in seven days for the Canucks. Seven days off for a starting goalie is unusual, but at this point in the season, it’s still Ryan Miller’s net. For now…

@ryanbiech then, all bets are off

As Jason Botchford suggests, if Miller continues to struggle and a playoff spot is on the line, the Canucks may have to turn to Eddie Lack to save their season. Miller has a .900 SV%, which ranks him third worst among NHL starting goalies. Meanwhile in Florida:

Another game, another milestone. Luongo ties Vernon for 12th on the all-time wins list. http://t.co/sLG9JxLImO pic.twitter.com/1F4dxJQ7jM

Luongo is having a great season so far. If he keeps this up, he will have his best season (statistically) since 2010-11.

After a great start to the season for both teams, they both appear to be slipping back to reality. The Canucks have lost five straight, while the Flames have lost seven straight.

I don’t think the Canucks are as bad as they have seemed during the last five games. They could have easily won two or three games in this stretch.

The Canucks were the subject of some trade rumours this week, with Zack Kassian’s name being prominently mentioned. As Omar suggested, I don’t see how the Canucks could move Kassian, as he is exactly the player the Canucks need to score those dirty goals. The Canucks do have some forward depth, so moving a player like Chris Higgins (who is a bit redundant on this roster) for help on the back end might be worth looking at.

The Canucks need to continue to get younger and faster, and with all the long term contracts that the Canucks have, they may need to explore the trade market to help their current roster and open roster spots for prospects like Nicklas Jensen. But at this point, everyone needs to relax:

All this trade talk involving #Canucks is just posturing before the trade deadline. Nothing will happen until then.

Coach Willie shuffled the lines again after the 2-0 loss to the Dallas Stars on Wednesday, with Jannik Hansen getting a promotion to the second line. Hopefully this will kick-start the struggling Nick Bonino and Chris Higgins. With Hansen’s promotion, Burrows drops down to play with Derek Dorsett and Bo Horvat. Normally this would be a demotion, but given the way that Horvat and Dorsett have been playing, this may also help Higgins bump his slump. Tom ‘Play me or Trade me‘ Sestito and Alex Biega are expected to be healthy scratches. Ryan Miller is expected to get the start in net.

The Flames coming into town is an early Christmas present for the Canucks. Sometimes the best way to end a losing skid is to play a team going through a worse losing streak. I expect Hansen to get Bonino and Higgins going and hopefully the Sedins can feast on the Flames. I am feeling a 4-1 win for the Canucks.

One thing I do know for sure, is that this won’t happen again: