After just two games, this has quickly become an emotional series thanks to some late game theatrics in Game 2. The series shifts to Calgary tonight, as the Canucks will play the Flames in front of an amped-up crowd at the Saddledome. 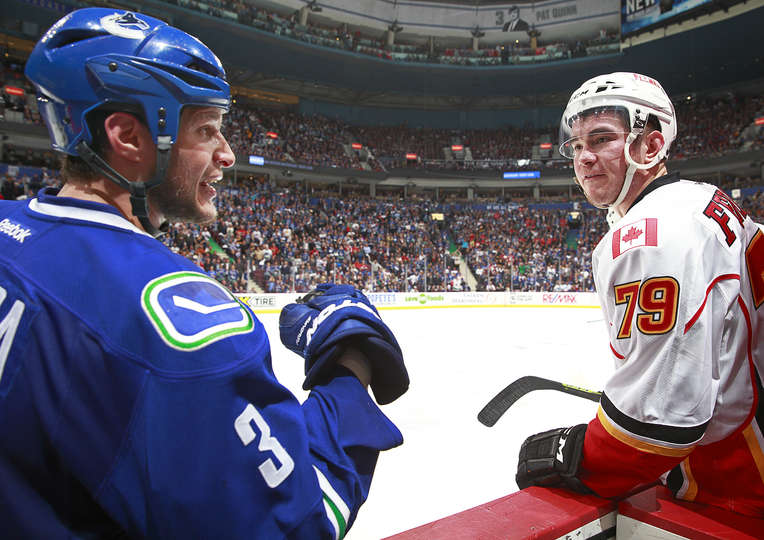 Leaving Vancouver and the friendly, if surprisingly raucous, confines of Rogers Arena will produce a new backdrop for this series to unfold upon. As the two teams prepare for Game 3 in Calgary tonight, you can be sure more than a few players on each team are envisioning what they might do should they get their hands on some of their opponents.

On Friday, the Canucks started better than in Game 1 and save for a few lulls, never really let Calgary into the game. The Sedins were dominant again, Willie Desjardins barely strayed from his game plan, and Eddie Lack was solid when called upon. If the Canucks can produce a similar effort tonight, they could be looking at their first series lead since 2011. 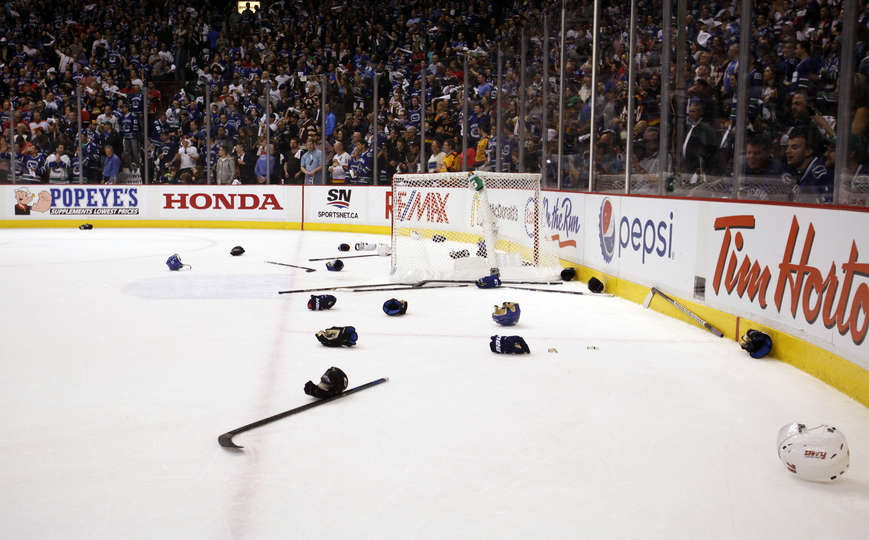 For how much these teams reportedly don’t like each other, Game 1 and most of Game 2 developed in a relatively tame fashion. Well, in a manner eerily reminiscent of the accusations levied by John Tortorella on that infamous night over a year ago, Bob Hartley let the goon squad out once he appeared to realize the game was probably lost.

The Flames looked determined to start a line brawl, as Brandon Bollig approached Eddie Lack after the whistle and Deryk Engelland instigated a fight with Derek Dorsett. And I’m not the only one that came to the conclusion. The NHL fined Hartley for his “questionable” deployment.

In any case, it sure added some excitement to the end of the contest and has everyone excited for what tonight’s game holds. Rest assured both teams will be preaching the importance of discipline, but there sure to be a few more extra shots between whistles than we’ve seen in the first couple games. The unsavoury sentiments that riddled series past between the Flames and Canucks are finally back. This could get interesting. Well, to be fair, this was interesting.

The Canucks finished the regular season with the 5th best road record in the league (24-14-3) and that may be crucial as this series unfolds. While it’s been a long time since anyone involved with the Calgary Flames organization had anything to cheer about, that will no doubt just add to the excitement and enthusiasm in tonight’s crowd.

"We have to channel that to our advantage." – Colborne on the #CofRed's energy pic.twitter.com/N7oEoIjQAc

The “C of Red” will be loud and unforgiving, but if the Canucks can establish pressure early, and perhaps even notch a goal or two, it would go a long way to at least quieting the home crowd to a a dull roar.

Willie D is loyal to his players like he is to his rides…he's been drivin' this Buick since new..#dontexpectchanges pic.twitter.com/Fzt9JKSfKm

As much as he was admonished for it after a disappointing Game 1 loss, Willie Desjardins stuck to his metaphorical guns and once again used all four lines with impressive consistency. Looking back to Game 1, the Canucks ice time leader (Alex Edler, 22:11) played less than ten minutes more than Brad Richardson (11:46), the Canuck registering the lowest TOI. That’s incredible.

The trend continued, with Edler on the ice for 24:45 on Friday and Ronny Kenins playing for 11:15. That in and of itself may not mean much, but when you look at how Calgary coach Bob Hartley uses his players, you may start to understand the impact this could have, should this series go more than 5 games.

Hartley has been known to lean on his stars and this series is no different. In Game 1, Dennis Wideman played 30 minutes and 3 seconds. The lowest TOI for the Flames in that game? A whopping 3:56, registered by defenceman Corey Potter. That’s a difference of over 26 minutes! Game 2 produced similar results, with Kris Russell playing for 26:51 and Potter playing for just 5:34. It’s not just Potter either. The Flames have had nine players in the first two games play for less than 11 minutes. The Canucks haven’t had one.

Once again, should this game go the distance, Willie’s strategy may really start to pay dividends.

No Edler or Bieksa as #Canucks skate begins. pic.twitter.com/p7leQvkMRZ

Alex Edler and Kevin Bieksa were missing from practice this morning. It’s playoff time and injuries are kept top secret, so we likely won’t know their status until the pre-game warmup. Hopefully for the Canucks’ sake, they are just having “maintenance days”. Both players finished the game on Friday.

Willie said Edler & Bieksa are game time decisions. "We'll see where they're at"

For now, let’s expect the same lineup tonight that suited up for Games 1 and 2.

The entire city of Calgary will probably be shut down for their first home playoff game in just under six years. They have the right to be excited about this though.

Nobody expected the Flames to be in the postseason and picking up a win in Game 1 has likely only improved the perspective of fans in Stampede Country. The Canucks will have to be ready to weather an early onslaught and should they be able provide some pushback in the form of physical play, crisp and deliberate passing, and a couple goals, the ol’ Saddledome may sag just that much more.

I’m predicting the Sedins take charge once again and impose their will upon a Calgary team that is quickly remembering why they haven’t had success in recent years against this Canucks team. Vancouver to win by a score of 3-1.