The Canucks start their longest road trip of the season with a Friday night match against the lowly Columbus Blue Jackets. The Blue Jackets are struggling, but always seem to play the Canucks tough in Columbus. Make no mistake, this will be no cake walk.

It is a small sample size, but the Canucks appear to be a very good hockey team. Good teams bury struggling teams early. This is yet another early test for a Canucks team trying to redefine itself.

Willie Desjardins has had an extremely successful start to his inaugural year as an NHL bench boss. With the sad news of the passing of Pat Quinn, Canucks fans seem to see why Willie has become so popular, so quickly; he coaches like Pat Quinn. He may not have the stature of the “Mighty Quinn”, but there are a few similarities between the style of play the Canucks play now as compared to the successful years under Quinn. Be it the fast paced, high octane offence or the rolling of four lines, it is pretty hard to ignore the “Quinn-like” characteristics that Desjardins is instilling in this year’s team.

The Canucks have a sparkling 8-3-0 record away from Rogers Arena so far this season, but face a long seven game road trip starting in Columbus. These types of road trips can make or break teams. This road trip is coming at a very good time for the Canucks. They are playing well, but have had enough inconsistency to not feel complacent. The Canucks can look forward to playing a bevy of Eastern Conference teams and Canucks fans can look forward to multiple games in which the Canucks opponents have literally no idea how to defend the Sedins. 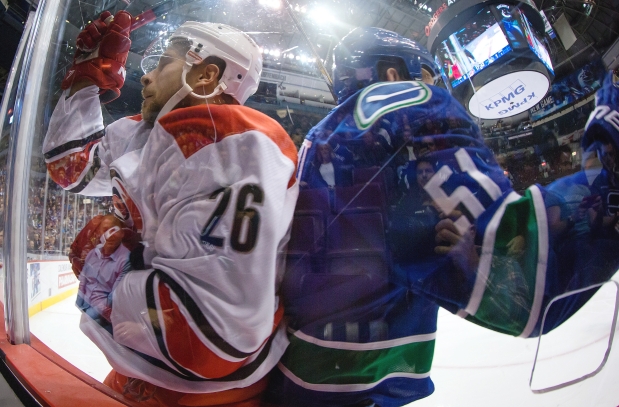 The trade that brought Derek Dorsett to the Canucks early in the offseason was seen as nothing more than a depth move at the time, but clearly Dorsett has meant a lot more to the Canucks this year. Dorsett is the kind of rugged fourth line player that the Canucks have missed in recent years and he has also shown some very capable offensive abilities. Dorsett will be one to watch as he is playing a Columbus team that gave him his first taste in the NHL.

Coach Willie Desjardins confirms Zack Kassian will not join #Canucks on this trip. “It’s a finger thing, he’ll be out a few weeks.”

Dan Hamhuis, Zack Kassian, and Tom Sestito are all injured which means Linden Vey draws back into the lineup. Kassian is expected to miss 2-3 weeks after being slashed on the finger last game. Frank Corrado will be the lone healthy scratch.

The Canucks are on a role and winning while playing an exciting brand of hockey. The Blue Jackets are just the opposite. Without Brandon Dubinsky and Nathan Horton, Columbus just does not have the horses to be competitive in the Western Conference. Look for the Canucks to have a fast start and cruise to a 4-1 victory. All this and you still have the rest of your Friday night to enjoy. You gotta love the Canucks East Coast swings!