If the Vancouver Canucks are looking to string some wins together, it won’t be easy to start a new streak as they pay a visit the United Center to face an old foe: The Chicago Blackhawks.

The Canucks are coming off of yet another devastating loss to a Western Conference rival. That’s a sentence that has been repeated far too many times lately as Vancouver continues to lose ground in the West.

Monday’s loss to the Minnesota Wild revealed a few things about the Vancouver Canucks. Most notably, that being down by two goals is a knockout punch and that their starting goaltender may not be the stabilizing presence they thought six million dollars would buy them.

Regardless, it’s time for the Vancouver Canucks to get serious in their quest to return to the Stanley Cup playoffs. They will need to get about as serious as Radim Vrbata reading the comics section in the local newspaper: 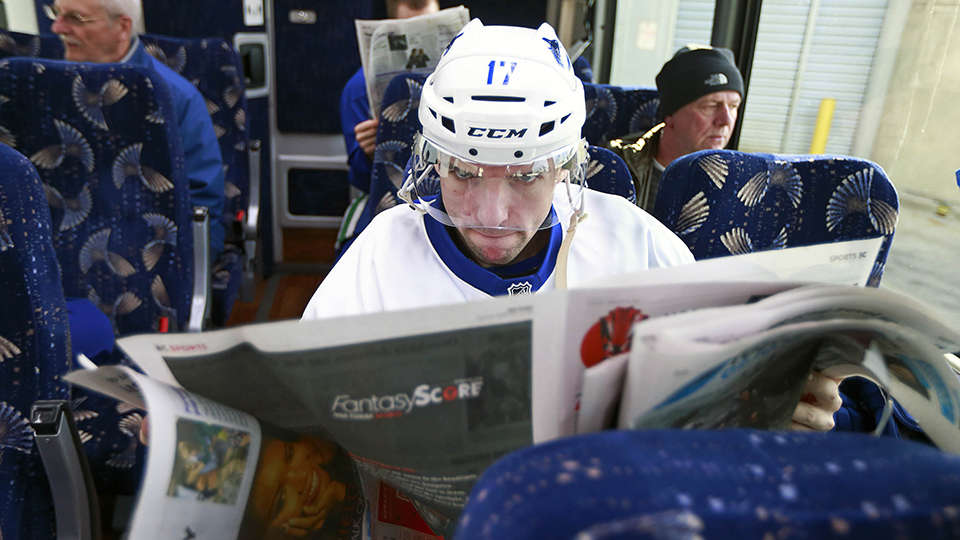 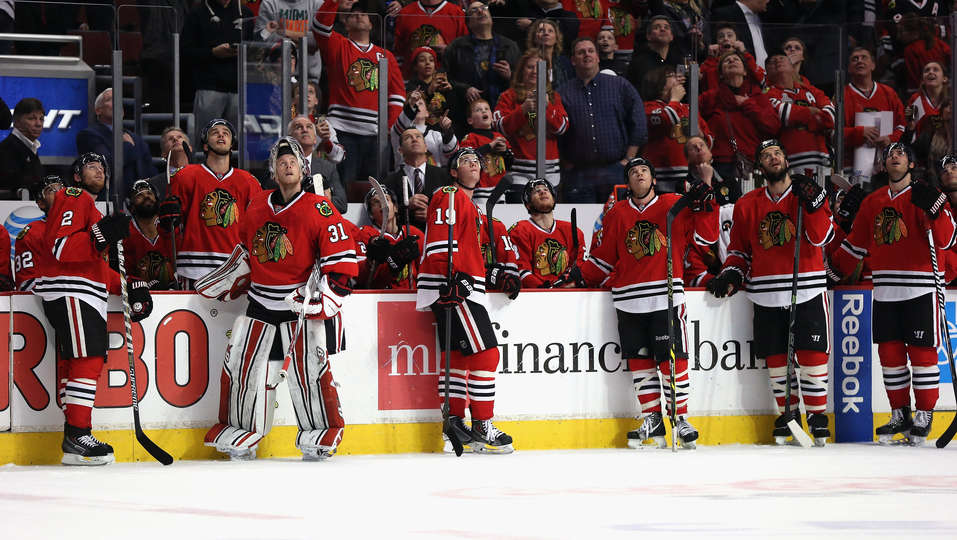 The Chicago Blackhawks are pretty much where they are every year around this time; leading the West in goal differential (+39) and hovering around the top of the Conference, but not quite at the top. It’s usually a good sign that the Hawks are gearing up for another run through at least a couple rounds of the playoffs.

Led by Captain Jonathan Toews and his little buddy Patrick Kane, the Blackhawks are a fast team that loves to take advantage of slower teams through the neutral zone. Their defence is also exceptional at moving the puck quickly up the ice, as evidenced by the two or three breakaways they usually get every game.

In order to compete with Chicago in their home rink, the Canucks are going to have to bring forth a truly special effort as the Madhouse on Madison has been a house of horrors in the past and likely won’t get any easier on Wednesday night.

1. No Pressure. But Really, Lots of Pressure

One look at the Western Conference Standings tells you about all you need to know how things currently look for the Vancouver Canucks. 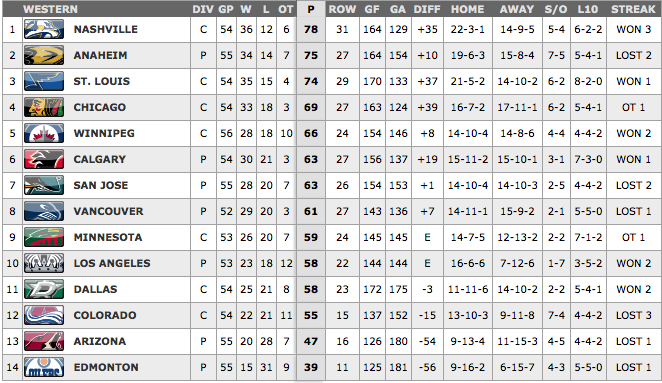 Virtually every team other than the Arizona Coyotes and Edmonton Oilers are still in the thick of the race for the playoffs. And if you think the standings look jammed up right now, imagine what this will look like in a month when the three-point games between conference rivals become more prevalent.

The one thing that the Canucks have going for them is their games in hand, although they have managed to successfully squander that advantage over the past couple of weeks.

It’s amazing though how each game has such a dramatic effect on the standings. If Vancouver beats Chicago and San Jose loses to the Washington Capitals on Wednesday, then just like that, the Canucks will be sitting in sixth in the West.

Lose however, and they remain in eighth, only two points up on the Minnesota Wild with the same amount of games played.

It’s going to be an interesting and stressful ride the rest of the way folks.

It’s getting depressing that the Canucks are falling into the old habit of not being able to compete in games where they have given up more than a goal. Two or more goals against and it’s basically game over for Vancouver.

Talked on post-game last night about #Canucks inability to battle back from 2-goal deficits. Even TML can do it. Were down 2-0 & 4-2 vs NYR

Okay, when the Toronto Maple Leafs start doing something the Canucks can’t, that means we’re in a John Stewart leaving the The Daily Show level of depressing.

It still blows me away that this is the same Vancouver team that looked unstoppable on offence early in the season. As it stands, a two-goal deficit means we’re debating which goalie should start the next game (probably Eddie Lack) and when Nicklas Jensen should be called up to help salvage an offence that has sputtered to 19th in the National Hockey League.

Now there’s a thought. Call up Nicklas Jensen because although this isn’t going to be a guaranteed success story, the players Willie Desjardins currently has sure aren’t getting the job done. 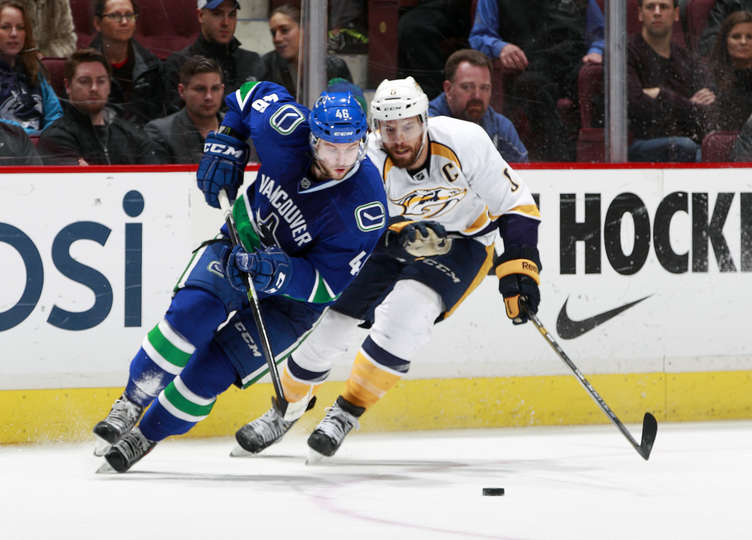 Not to mention that at the rate the Canucks are currently dropping, they are going to need somebody to come up from Utica just to fill the roster. That player might as well have the ability to score a couple of goals.

3. The Injuries are Mounting

Yikes is pretty much the best reaction you can have towards Vancouver’s current injury situation. But it may not be as bad as it seemed on Tuesday:

Coach Desjardins said there's a chance Bonino plays against Chicago. "There are no breaks, we had him checked out again today." #Canucks

Not that Nick Bonino is helping to score goals these days, but Linden Vey as the second line centre is a gigantic hole that the Chicago Blackhawks will destroy. And they will enjoy destroying it because they are really sadistic that way!

It doesn’t take a genius to figure out that this is possibly the worst time for the Canucks to be going through a string of injuries as their season is at somewhat of a crossroads. Although they have been able to maintain a playoff spot up to this point, the teams below them have narrowed the gap considerably and Vancouver is in danger of falling out of contention if they don’t start to string some wins together.

If Trevor Linden and Jim Benning truly feel this is a playoff team (and aren’t just placating a frustrated and playoff-starved fan base), then they must be near death from holding their breaths as injuries aren’t helping their already precarious position in the Western Conference.

Well as I just talked about, it doesn’t look good for Vancouver if Nick Bonino isn’t ready to go. As it stands, these are your lines from Tuesday’s practice:

According to the Province’s Ben Kuzma, it appears likely that Eddie Lack gets the start.

I hate to say it like this, but the way the Canucks compete and by extension, the outcome of the game, really depends on Eddie Lack.

If Lack lets in a softy or two early, it’s most likely lights out as the Canucks can’t seem to muster anything close to resembling an offensive attack.

But if the Stork can stand on his head enough early to keep Vancouver in the game, then the team might gain enough confidence to actually compete with the Blackhawks and come away with a point or two.

Unfortunately, I’m not banking on that happening. The Canucks lose again by a score of 4-1. Maybe that mystery trade that people kept harping on about will actually happen. Or just like most NHL trade rumours on Twitter, it was complete crap the entire time.