Coming off a gritty win in St. Louis, the Vancouver Canucks finish off their first extended road trip of the season versus the Colorado Avalanche. The Avalanche are in borderline desperation mode with a very slow start to the season and the Canucks need another win to keep the momentum from St. Louis going.

The Avalanche (1-4-2) have had a disastrous start to the season and the Canucks continue to surprise. Last year, the Avalanche were widely regarded by those who study advanced stats to be a team winning despite mounting evidence that they shouldn’t be. The Avalanche largely had success due to exceptional goaltending and timely scoring. Neither have happened so far this season and the Canucks hope to continue the trend in Colorado.

Help is on the way for Colorado as Semyon Varlamov, who has missed the last three games with a groin injury, will be back in the lineup for the Avs.

@IanLusher actually the @tsn1040 post-game show will tell you everything you need to know about this game. And PDO won’t be mentioned

The Canucks woeful result against the Dallas Stars brought out the typical worst in the local sports media. I’m not saying the Canucks played a great game in Dallas, but anyone watching the game witnessed one of those nights where Dallas received all the bounces along with great goaltending. In other words, it was just not the Canucks night and talking about the +/- of Alex Burrows and Chris Higgins was absolutely a complete waste of everyone’s time. Our own Lachlan Macintosh gave a great explanation of why every fan and media member should understand fancy stats before they dismiss it in his excellent game day report for the St. Louis game. Note that Lachlan also correctly predicted a Canucks win. Another smart guy in the pretend media!

Eddie Lack will get his chance to show that his pre-season form was not an aberration versus Colorado. While a lot of the local focus has been on Ryan Miller, it is Lack that really has the pressure to perform. Miller is a proven commodity and has the 3 year, 18 million dollar deal to prove it. Lack is a very good goalie who needs to continue to be very good in spot duty. If not, Jacob Markstrom is absolutely killing it with the Utica Comets and appears ready to be an NHL back-up. Lack could see himself playing in a city like Winnipeg or Edmonton sooner than anyone thinks (just a guess on my part).

One aspect of the Canucks play so far this season that has caused a lot of issues is the Canucks woeful performance in the the face-off circle. Linden Vey was the only Canuck above 50% at the dot against St. Louis and only Brad Richardson achieved the same Tuesday in Dallas. You just cannot win in this league when you are continually having to retrieve the puck. Bo Horvat, who is currently on a conditioning stint in the AHL, was very good in the face-off dot in pre-season and is a big reason why you will see Horvat playing centre in a Canucks uniform very soon.

Bo Horvat continues his conditioning stint in Utica and Ryan Stanton is the lone injured Canuck. Expect Tom Sestito to be a healthy scratch once again. Will Sestito get into the line-up at any point this season? Frank Corrado might get his chance to draw into the lineup in place of Yannick Weber. Eddie Lack will start in goal.

As always, we will update this section as more information becomes available.

Now that the Canucks have won a game against a team from outside of Alberta, look for the trend to continue in Colorado.  The Canucks take this one 3-1 and Patrick Roy jumps the boards to try to engage Willie Desjardins in a fight. Willie, ever the personable gentleman, convinces Roy to take him out for dinner to talk things over and Roy picks up the tab. 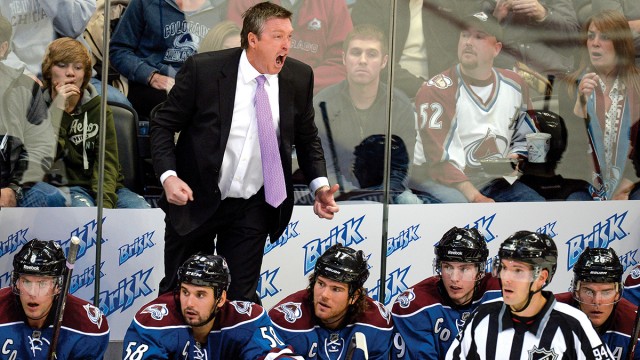