The Flames? The Calgary Flames? Those guys again?? Yes, the Canucks and Flames are facing off in the postseason once more, and these two clubs have a storied past with each other. So grab your jersey, throw it on the ice, and watch Iginla fall to the ground as we take a look back at the playoff history between the two Canadian clubs.

Ah, the days before Twitter, back when a player could have an affair in multiple cities without having it posted on Instagram.

Yes, it was a different game back then. Goalies looked like this in the 80’s: 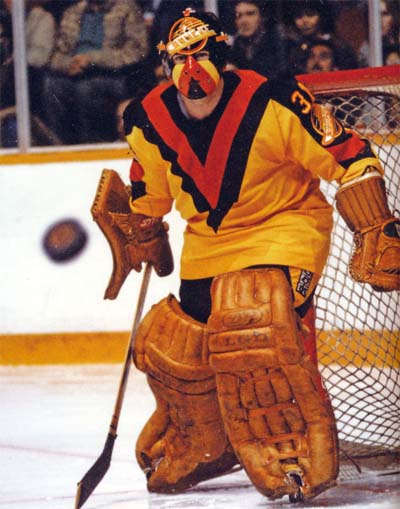 That would be 5’8″ John Garrett wearing what is quite possibly a jersey actually made out of actual cheese. The days when you picked your smallest guy on the team and threw him in net. “He’s small, so I bet he’s quick and will get to the puck faster than a tall guy.”

This was a time when the fifth best GAA in the league belonged to Grant Fuhr at 3.31. It truly was a glorious time for Wayne Gretzky to play hockey in, as he scored 92 goals that season.

The Canucks ’82 run would be the lone bright spot in an otherwise miserable playoff existence for the club until the early 90’s. This year marked the first playoff series victory ever in Canucks history, and their first Stanley Cup Finals appearance, where of course they lost to a New York team.

Despite losing to the juggernaut Islanders, the Canucks at least got to steamroll Calgary out of the playoffs that year.

Even in those ugly jerseys, it’s awesome to watch Harold Snepsts’ hair flowing in the wind, and Tiger Williams running across the ice as he celebrates a goal.

And not to beat up on the goalies, because gear and technique were trailing far behind the skaters at that point, but this was a time where goalies hung onto the top of the net to move side to side:

Rollie Melanson would weep at this gif. Openly weep at it, then try and burn it.

That being said, watching goalies back then was a hell of a lot of fun. Desperation saves left and right!

The ’83 Canucks, fresh off of their improbable ’82 run to the Cup Finals and previous sweeping of Calgary, were ready to square off once again against a Flames organization slowly on the rise.

Sadly for the Canucks, they would lose in four games (this was back when the first round was a best of five series, which was only changed to seven game series in ’86).

Fun fact: the only Canucks win in the series was credited to Mr. Cheese himself, John Garrett.

Fun Fact #2: Marc Crawford got a single assist in the ’83 playoffs! 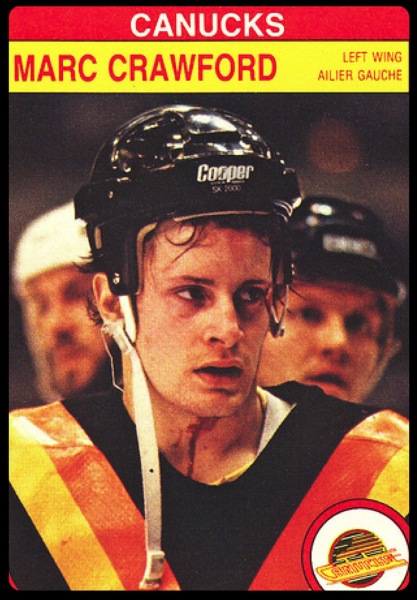 Much like a bad Transformers sequel, things stayed the same but somehow got slightly worse the next time around, making you wonder why they bothered in the first place.

The Canucks only win in the series came in a 7-0 blowout in game three. The only other highlight of that year was Frank Caprice’s glorious mullet showing up earlier in the regular season for an extended visit: 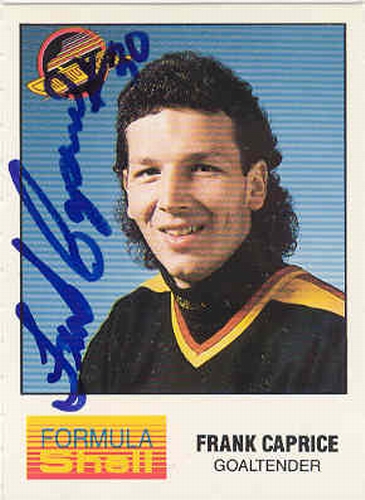 The one downside for the Flames is that this was a time when marketing in the NHL was next to nothing, which means Ed Beers missed out on a ton of Molson Canadian ad opportunities.

Fun Fact #3: Ed Beers grew up in Merritt, and for a town that has a mural of Reba McEntire plastered on a building, you would think they’d have a billboard somewhere to commemorate Beer’s NHL career. For shame Merritt, for shame.

OK, before we begin, yes Joel Otto kicked it in.

Now, the Canucks shouldn’t have even been in this series. The Flames had a ridiculously good team at the time. Let’s look at their roster a bit more:

If you need further proof, compare those names to some of the Canucks names: Brian Bradley, Robert Nordmark, Jim Sandlak, Steve Bozek…yeah.

Despite that, the Canucks gave the Flames the scare of their lives when a team led by a young Trevor Linden and Kirk McLean did their best to dethrone the Presidents’ Trophy champs.

But then the Hockey Gods laughed at Vancouver and spat in their faces.

Joel Otto kicking it in to win the series in OT?

It’s almost good that the highlight is in standard definition, it would probably be more heartbreaking if we could see the actual tears in McLean’s eyes as Otto kicked the puck in.

Fun Fact #4: Paul Reinhart was an amazing defenceman who had to retire at the age of 29 due to his back. Despite this, he still managed to put up 57 points per season in his time with Vancouver. A shortened career that doesn’t get nearly enough attention that it should.

Most of you will remember 1994 vividly. Or have read about it. Or heard about it at least once during the bi-weekly celebrations held for the ’94 team in Vancouver.

Long story short, the Canucks were down 3 games to 1 in the blink of an eye, and it was anarchy in Vancouver. It got so bad that some people felt Kay Whitmore should have been named the starter for the rest of the series. Pavel Bure was questioned (Don Cherry in particular seemed to enjoy picking on him, which is weird, because Bure is Russian and Cherry loves Russians, right?), and even Pat Quinn’s traditional gum toss of disgust didn’t have the same vim and vigor on it.

Luckily for Vancouver, this was one of the few times overtime wasn’t a horrifying experience for the team. Three straight overtime wins from the Canucks later not only lifted the usual doom and gloom playoff experience for Vancouver, but they rode that momentum all the way to the ’94 Finals. Which I am told were great, and that both New York and Vancouver agreed to end the series in a tie due to how great it was.

Anyways, want to see the three daggers that plunged into Calgary’s chests? Of course you do.

I liked this goal because afterwards anytime I scored over the goalies glove off the wing in NHL games I would scream “’94!” at my best friend.

Also, this is the exact opposite of the butterfly goaltending that was soon to take the NHL by storm: 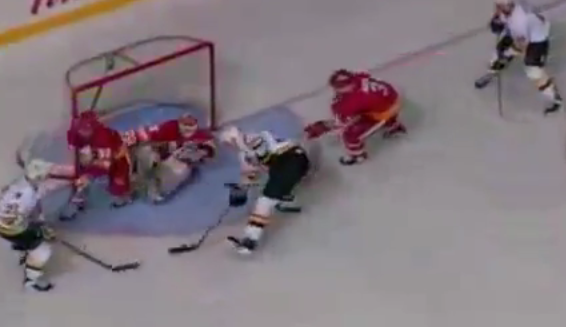 Vernon is actually sitting on his bum, reaching his hands, out trying to make a save. Amazing.

This would also mark the last time Pavel Bure smiled in a Canucks jersey.

I don’t even really have to say anymore, but I will, because this is the best save in Canucks history. I remember half walking out of the room ready to run away in disappointment before screaming at the TV at the INSANE save I had just witnessed.

While the Canucks didn’t win the Cup (I heard the series ended in a tie?) Kirk McLean earned himself free beer for life from anyone in Vancouver.

How many times has he talked about The Save? Does he tire of it? Does he go through ups and downs with it? Like, maybe he’s had a bad week, so he goes to a Vancouver bar and just casually asks people what the best save they’ve ever seen is? I have so many questions.

If you’ve ever wanted to see a team clutch and grab it’s way to a Cup Final as they hid behind a goalie, then Calgary’s run in 2004 was for you. Full credit to the Flames that year, don’t get me wrong, but they played some ugly hockey.

This season was also notable because it was the year the Red Mile became a prime spot for ladies to flash their boobs. Sure, it’s cool to do on the Red Mile, but what about against a penalty box, huh Calgary? Vancouver has THAT trend on lockdown.

Before that all went down, however, the Canucks entered the series as the favorites on paper. They had the up and coming Sedins. They had the offense from the defense. They had a goalie who wasn’t Dan Cloutier. The only thing missing? Todd “One Punch” Bertuzzi.

Yes, this was the year Todd Bertuzzi punched away the peak of the West Coast Express era, as the Canucks stumbled into the playoffs enveloped in a cloud of fear, sadness, and Brent Sopel’s cologne (he had 42 points that year. BRENT SOPEL had a 42 point season.)

With the Canucks reeling from Bertuzzi’s suspension, Burke went out at the deadline and basically duct taped together the team as best he could.

In: Geoff Sanderson, Martin Rucinsky, and I kid you not, Marc Bergevin who was brought in to make the room laugh a little bit to try and ease up the tension from the Bertuzzi incident. Hopefully he told some really funny jokes in his handful of games here.

Rucinsky in particular was awful to watch. You know Radim Vrbata? Imagine everything he does, but the exact opposite. You know Mason Raymond? Rucinsky stayed more on the perimeter than Raymond did. Yes, it is actually possible for that to happen.

Still, the Canucks had the mojo of the WCE flowing through their blood, and they battled hard against the Flames. Down 3-2 in the series, Brendan Morrison gave us this awesome memory:

With the Canucks riding the momentum of that goal, the series shift back to Vancouver for game 7. With the Canucks down 2-1 with under 25 seconds to go in game 7, we all thought it was over. “This is Vancouver, this is what we do” we said to ourselves.

I remember very clearly Iginla getting his stick slashed out of his hands and tripping over it.

I then remember very clearly walking down the stairs in GM Place towards the exit, watching the ice as I went, getting ready to run once Calgary got the empty netter.

I then remember Matt Cooke scoring and me jumping like an idiot, man hugging everyone I could find. I made many new friends that night…

The atmosphere was unreal after that goal. After Cooke scored, you could actually FEEL it in the air during the OT intermission. It was just this weird feeling of “this is meant to be.”

I remember watching the fans shake the glass back and forth so hard I thought it was going to break.

I remember Jovo jumping around like a mad man in the penalty box.

Then I remembered “Oh shit, Jovo has a penalty.”

Then Calgary would score in overtime with noted Canucks turncoat Martin Gelinas popping the puck past Alex Auld.

The dream was over.

Still, much like the previous two series before it, it was one of the best playoff series in Canucks history. It was fun to watch, and it had tense moments littered throughout it.

With the Canucks missing the playoffs last year, and Calgary having missed the playoffs since 2009, fans should be excited to see what happens next when these two collide this year. Somehow these two teams always seem to find a way to produce some of the most memorable moments in franchise history.