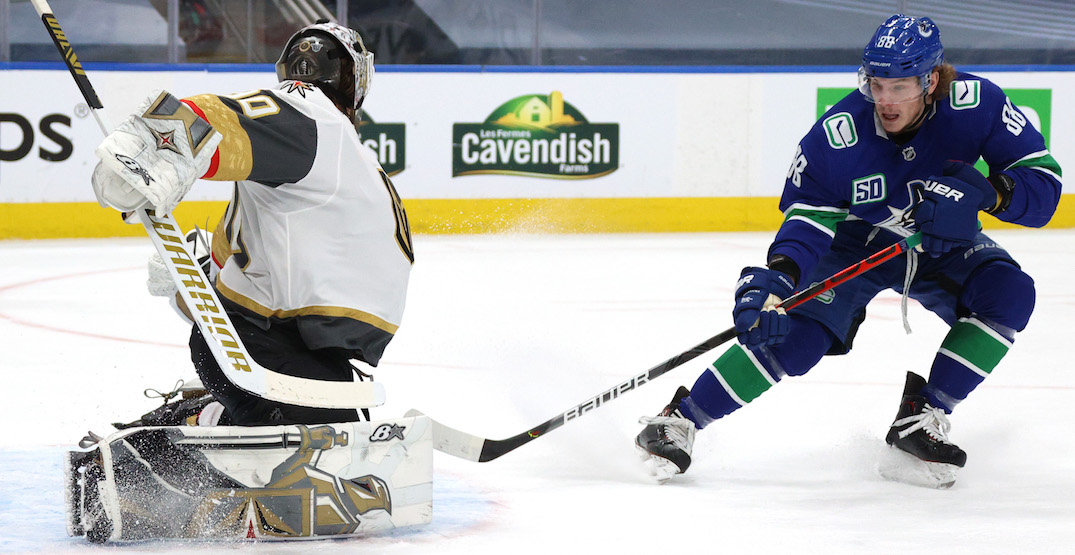 The playoffs are back, but so are the Vegas Golden Knights, which is bad news for the Vancouver Canucks.

Despite a strong first period where the Canucks outshot Vegas 16-9, the Golden Knights capitalized on their opportunities while Vancouver couldn’t. The Canucks trailed 2-0 after the first period on goals from Alex Tuch and Zach Whitecloud, and they never recovered. Mark Stone added a third goal for the Golden Knights early in the third period, sealing a 3-0 win for Vegas.

It’s the second shutout for Robin Lehner in this series, which the Golden Knights now lead 2-1.

Lehner turned aside all 31 of the Canucks shots for the goose egg, making it difficult for Vancouver’s offence all night long.

always hug the guy who gets hockey pucks fired at him all night 🤗 pic.twitter.com/h3dSBBgOKn

Vegas managed to score two quick goals in the first period, forcing the Canucks to play from behind for the majority of the game.

Vancouver came out with intensity in the first frame, but lost momentum after a few missed opportunities on the powerplay and only managed 15 shots the rest of the way.

Markstrom, who has been one of the best goaltenders in the Western Conference bubble so far, held his own with 31 saves but didn’t get much help on the other end of the ice.

Vancouver had several chances to get on the board, including a dangerous one-timer from J.T. Miller to Bo Horvat in the third period, but was unable to find the back of the net.

Despite the loss, Vancouver made a powerful statement earlier this week when they reportedly reached out to Las Vegas opponent Ryan Reaves, ultimately culminating in a two-day player protest.

"It was an important decision and it was the right decision to make. We needed to do something and make a stand." – @BoHorvat pic.twitter.com/h6y4d4WpAl

Although the teams have been locked in heated competition on the ice, they stood together on Thursday to demonstrate support and unity towards an ongoing fight for social justice.

After a strong Game 2, the Canucks were unable to pick up where they left off once the attention returned to the rink.

Head Coach Travis Green was unwilling to condemn the team’s effort, however, was notably frustrated during his post-game press conference.

Vancouver won’t have much time to dwell on the loss as the teams are set to lock horns again tomorrow, Sunday, August 29, for Game 4.

With back-to-back games, will Vegas look to give Marc-Andre Fleury a shot in net or will they stick with the hot hand in Robin Lehner?