Frankie Corrado. Frank the Tank. Captain Toe Drag. (I assign random nicknames to him). Frank Corrado is looking to make 2015 the year he finally lands a full time job in the NHL. He has seen others rise up the depth chart past him, but Corrado’s time might finally be now.

Vancouver has gotten lucky with defencemen over the last decade. Alex Edler was an under the radar guy who came in and quickly adapted to playing in the NHL. Chris Tanev was another person who joined the team and was able to showcase an NHL skill set early on in his career. Frankie Corrado looked to be on that same path when he was called up by the Canucks during the end of the 2012-13 season.

He only played seven games (four of them playoff games), but fans were excited by what they saw. Corrado was much like Tanev in that while he didn’t display a lethal offensive skill set, he looked dependable in his own zone. Sure, he lost some physical battles in the Sharks series, but strength and conditioning were something that could be easily added over the off-season. Hockey IQ is much harder to add, as some defencemen have shown… 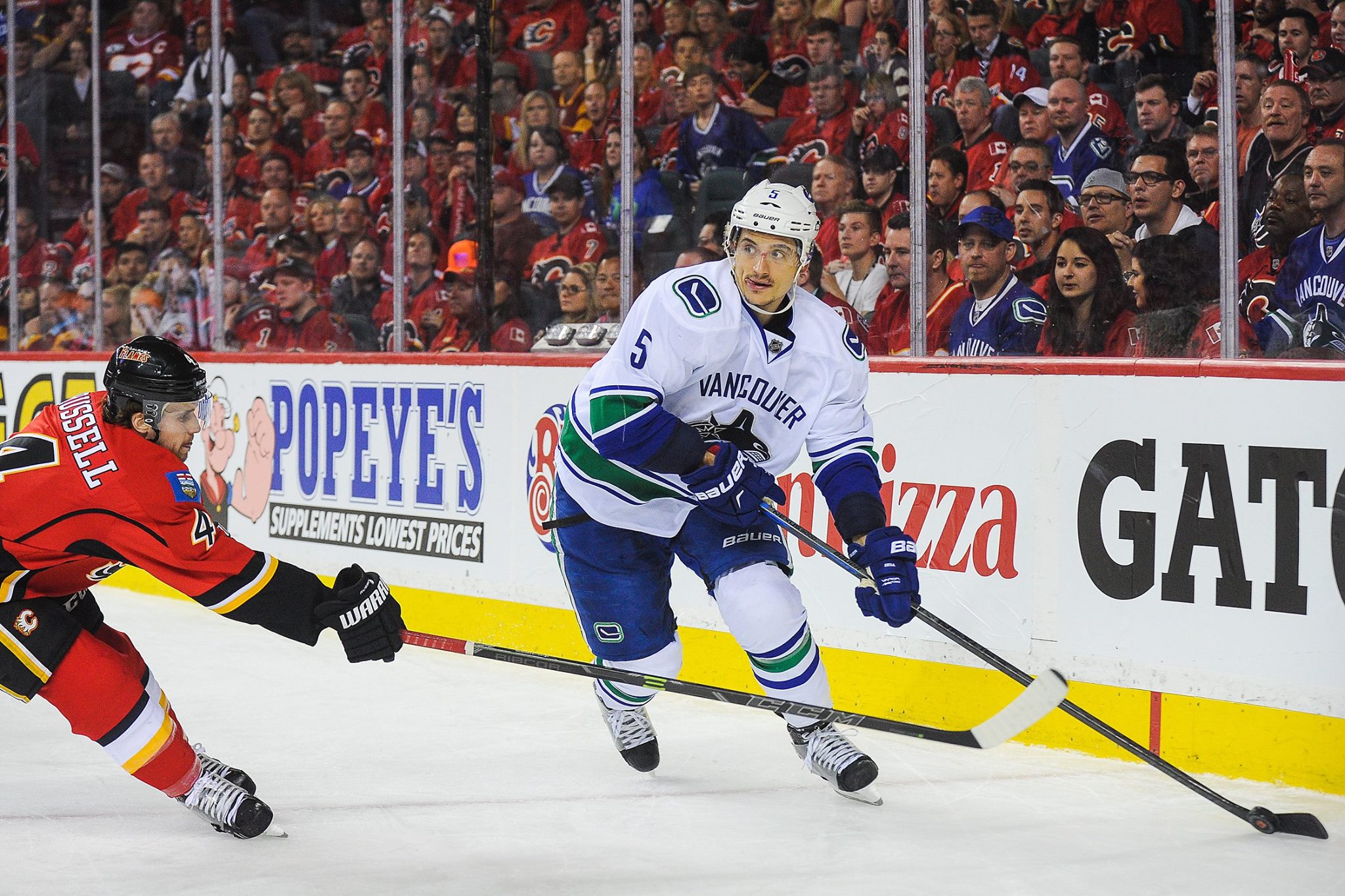 Yet when the 2013-14 season rolled around, Corrado found himself back in the minors. Now, 2014 was a unique year in Vancouver, for that was the year of the Torts. This was a season in which it was reported that Tortorella didn’t talk to Utica Comets coach Travis Green at all during the season, so even if Corrado played like bananas in the minors, Torts wasn’t going to know about it.

Despite that, Corrado ended up getting 15 games that year after Christmas, but only started seeing more than 10 minutes of ice time once the season had already become a tire fire in February. He managed only a single goal and no assists on the season.

2014-15, under new coach Willie Desjardins, saw a repeat of the year before. Called up after Christmas, he managed just one goal on the season, and averaged around 15 minutes a game. Bad luck showed up on his door step when he suffered an injury in February, and as a result, he missed a chance to step up in the lineup when Chris Tanev and Kevin Bieksa got hurt and missed some games. Instead that spot went to Yannick Weber, who took off in the second half of the season, playing alongside Dan Hamhuis.

Frankie Corrado, willing to eat metal to score a goal. HE ATE METAL FOR YOU.

So why will 2015-16 be any different for Corrado? For one, he is no longer waiver exempt. It’s easier to bide your time on younger players when you can just send them back to the minors. Send out a press release talking about how he needs “playing time” and away you go. With that no longer being an option, the Canucks, even if strictly for asset management reasons, will give Corrado more time with the big club to show his stuff.

Another road block that was moved out of the way were the deals that saw Adam Clendening head to Pittsburgh, and Kevin Bieksa traded to Anaheim. Both were right-handed shooting defencemen, which was causing a bit of a logjam on the right side. With the depth on defence having thinned out a bit, Corrado has never had a better time than now to stick a spot in the lineup with a strong camp. Or at the very least, be the 7th d-man on the team, ready to jump in for injuries.

#WWEUtica tonight, @MsCharlotteWWE waved at me, and someone is going to catch an rko from @RandyOrton later, just hope it's not @arch2five

That doesn’t weigh in on anything, but it’s a fun fact for you to remember the next time he plays.

So will 2015-16 finally be the year of the Corrado? If Benning really wants a faster team, then Corrado should get some looks this season, as speed and mobility are his major strengths. As a fifth round draft pick, he has shown an ability to raise his level of play at all levels of hockey on his path to the NHL, and it will be worth watching to see if he can make that final leap this year.

Will Corrado RKO opponents if given the chance? Well that’s a discussion for another time.