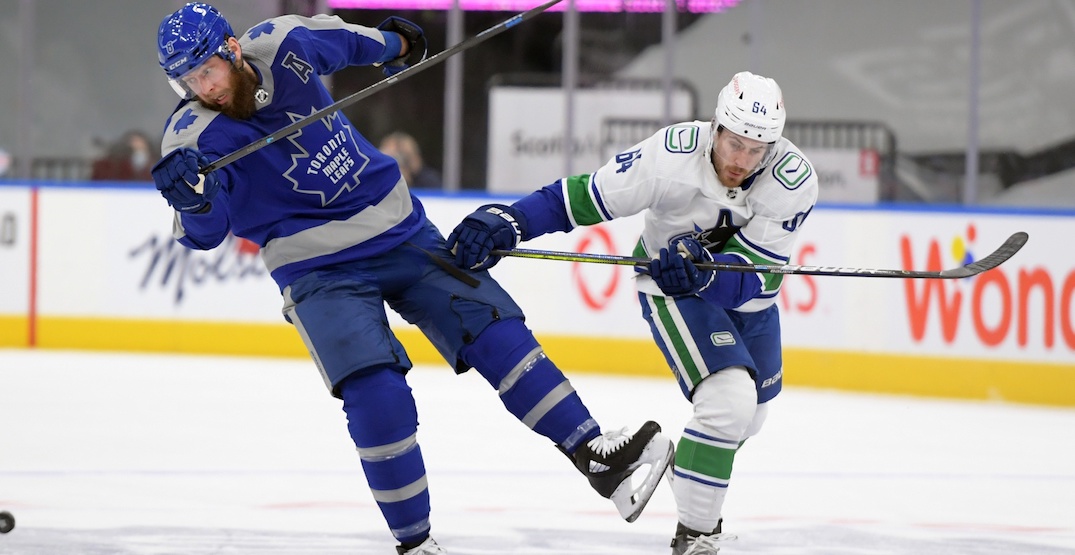 The Vancouver Canucks will be without Tyler Motte for some length of time.

Motte was placed on injured reserve by the Canucks today. The move came after Travis Green’s media availability, in which the only lineup news he shared was that Olli Juolevi would draw back into the lineup on defence, and Braden Holtby would start a second straight game in goal.

The fact that the 25-year-old was placed on IR is not encouraging, though, as that typically indicates that the ailment is not short-term. TSN 1040’s Rick Dhaliwal reports that Motte has a lower body injury, and that he could be out for “a few weeks.”

Tyler Motte on I-R with a lower body injury, could be a few weeks.

There going to miss him, he leads the NHL with 70 hits, next highest is 56.

Leads all Canucks forwards in blocked shots with 16.#TSN1040

Motte appeared to hurt himself in Saturday’s game against the Leafs, when Toronto’s William Nylander landed on his right leg.

Bit of the Höglander collision with Muzzin, and Tyler Motte possibly hurt after getting tangled up with Nylander.

Because pain is all the #Canucks get anymore. pic.twitter.com/oVAi0Y6Wbd

Motte finished the game, but perhaps some damage was done.

It remains to be seen who will draw into the lineup for Motte, although both Jake Virtanen and Adam Gaudette were healthy scratches last game. Either way, Motte will be missed on the penalty kill, and maybe even on the score-sheet, as he has five goals in 15 games this season.

Having lost four games in a row, the Canucks will be desperate for a win tonight in Toronto. The Canucks have been outscored 23-9 in their last four games. Vancouver has given up a league-worst 35.7 shots-against per game this season, and only the lowly Ottawa Senators have a worse goals-against average than the Canucks’ 4.00 GAA.