As the Canucks continue to free-fall further and further from the playoffs now seems as good as any to look at the state of the union.

The Canucks aren’t as good as we thought they would be, but they also aren’t as bad as they appear to be right now. What they are is somewhere in the middle, a very mediocre middle.

The season began all hunky dory, with a reinvigorated core group of players under a new head coach. The team appeared to be energized by that and went 9-5-1 in October. They probably were helped by the fact that head coach John Tortorella deployed his team as if it were in overtime of a playoff game at all times. Playing his top players ridiculously high minutes worked early on but appears to have burned out or broken most of the Canucks top players.

December was the Canucks’ best month, going 10-1-2, which is proof that this team is capable of a lot better than what they have shown of late. They did that with the Sedins producing at less than a point a game and Eddie Lack in net for 6 games.

Given what we know now, December must have been a mirage. The Canucks went 7-0 versus non-playoff teams, but only 3-1-2 versus playoff teams.

January was a month plagued by injuries and a tough schedule, which has spiraled into a complete lack of confidence team-wide. That, along with self-inflicted distractions from John Tortorella contributed to a horrendous February and March.

Nobody should have expected this team to contend for the Stanley Cup this season, but to be realistically out of playoff contention in early March is an indictment on the players, coaches and management. 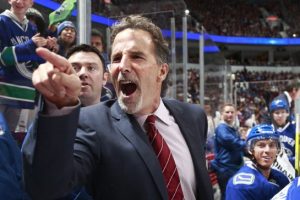 John Tortorella’s storming of the Flames dressing room received a lot of publicity, but nobody really knows how that affected the team that was already beginning their losing ways. Sitting Roberto Luongo in the Heritage Classic certainly did affect the team, as embarrassing a popular veteran teammate isn’t likely to endear you to any locker room. Furthermore, the decision piled on the pressure onto Eddie Lack’s shoulders which is unfortunate because it was all so preventable.

Despite this, the Canucks might be in a playoff spot if they hadn’t been so pitiful on the power play. The Canucks are 25th on the power play and seem to have no other plan but let Jason Garrison pound away on the blueline. While allowing Garrison to use his big shot should be part of the plan, it shouldn’t be the only plan. The power play is predictable and lacks imagination, and that’s on assistant coach Glen Gulutzan.

Another reason for the slide the Canucks have had is the fact that they have chosen to practice less often this season, in favour of rest. That decision appears to have hurt the power play, which is a part of the game that needs to be practiced often. It might also explain why other teams appear to be improving while the Canucks appear to be taking steps backwards.

I don’t blame Mike Gillis for not assembling a Cup contending team this season, they can’t contend every year. He actually made some excellent moves before the year, signing Mike Santorelli and Brad Richardson, and plucking Ryan Stanton off of waivers.

But sooner or later, Mike Gillis needs to make a big trade to improve this team. A week ago I outlined how to rebuild this team, but once again Gillis appears to be delaying the inevitable. His reluctance to trade a core player in the last three years (except when forced to by one of his goalies) is killing this team.

Gillis could have received a big haul for Alex Edler in June (Brendan Smith, Tomas Tatar and Tomas Jurco/Riley Sheahan) but didn’t pull the trigger. He could have traded Roberto Luongo for something prior to last season, allowing them to keep Cory Schneider. Those are just the two moves we know of, so it’s possible to second guess. Trading isn’t easy, but it is possible. Whether Gillis overvalues his players or can’t develop good dialogue with other general managers, his trading track record (Ballard, Booth and Kassian) has been poor in the last few years.

This organization is following the Calgary Flames model right now, and that should scare everyone. The Flames held on to Jarome Iginla and Mika Kiprusoff until they were worthless, lost Mike Cammalleri in favour of Olli Jokinen and traded away Dion Phaneuf for spare parts. They were mediocre and old for years, refusing to rebuild until only recently. 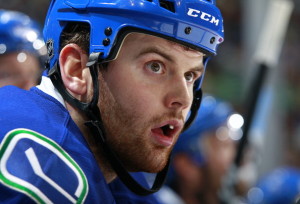 The Canucks are missing the “next generation” right now, which should be represented by Cody Hodgson, Michael Grabner and Cory Schneider, or at least an equivalent return in the form of a trade. The next generation is also missing because of how few NHL caliber players that have come from the draft. Gillis has been hurt by trading away draft picks to try to win a Stanley Cup and picking low in the draft, but the Canucks are still drafting worse than other comparable teams.

The state of the union is pretty grim at the moment. The playoffs aren’t likely for Vancouver this year, but that is far from the biggest concern this franchise has. Trades will be needed to change the mix on this team and quite frankly I don’t trust Mike Gillis to make those trades given his track record.