It was a long up-and-down summer for Canucks fans filled with emotional trades, emotional Summer Summits and an emotional entry draft.

I’m sure you found ways to fill your time when you weren’t thinking about the Canucks, but let’s be honest, all that time spent watching Big Brother and enjoying the crazy hot summer we had was just an empty attempt to fill the void.

Don’t worry, the wait for the start of the NHL season is finally over.

everything seems right now that hockey is back #nhlfaceoff #canucks #flames

On Tuesday, Captain Hank spoke on the radio about what you should expect from the Canucks this coming season:

“On paper we might not be as strong as some other teams, but we have a great group in here. We come out every game, we believe we can win that game, we beleive in ourselves, and it’s a fun group to play for.”

In the season opener they were a fun team to cheer for too, as they got revenge for last year’s first-round loss to the Flames, beating them 5-1.

Since Vancouver’s first round loss last season, we heard Jim Benning talk about the team’s lack of toughness over and over again. Benning spoke with the media Tuesday, talking about the moves the team made this summer.

“We made decisions this summer to try to get harder so we play a heavier game on the forecheck.”

Some of the decisions he’s talking about: trading Zack Kassian for Brandon Prust, Nick Bonino for Brandon Sutter and adding Matt Bartkowski.

The result of all those additions? According to Benning: “I feel good about our skillset and I think we’re harder this year.”

Second, Derek Dorsett and Brandon Prust both fought within the first 10 minutes of the game – so the team got harder.

And you need to get your head out of the gutter.

The team also looked faster and more skilled, due mostly to the youngsters in the lineup.

Earlier Wednesday, James Mirtle tweeted this chart comparing the size and age of the NHL teams. 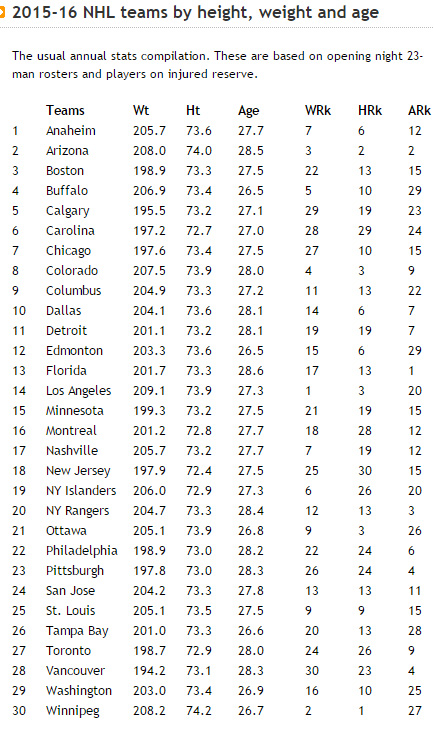 Surprisingly the Canucks are the smallest team in the NHL and one of the oldest. The Flames are the second smallest.

It’ll be interesting to see how hard the Canucks are when facing L.A. and Winnipeg. Let’s hope they don’t go soft.

TSN 1040’s John Shorthouse spoke with Henrik Sedin on the pregame show and Shorty asked which rookie has impressed him the most.

Hutton showed us why Hank answered the question so quickly with his pass on the Canucks’ first goal of the season.

Hell of a pass. And it won’t take long for Hutton to win over Canucks fans, who’ve been waiting years, decades, entire lives for a stud defenceman.

So we’ve anointed him the next Duncan Keith… luckily he’s proving he plays well under pressure.

Perhaps more exciting – how good Hutton looked on the second power play unit. He was making quick, heads-up plays, moving the puck, and looking like he’d played the position for years.

It looks like the #canucks have a second PP unit. Hutton the Quarterback.

Not to be completely outdone by his rookie counterpart, Jared McCann was skating like the wind too. His line finished at the bottom of the corsi stats for Canucks’ forwards, but they had a bunch of highlight moments including Alex Burrows’ goal.

McCann set it up (though the NHL didn’t give him an assist) by knocking the puck out of the air on the backcheck:

One more comment from Henrik on both McCann and Hutton: “They’re making moves that I was never able to. It’s fun to watch.”

When the Canucks acquired Brandon Sutter this summer, the one thing that stood out looking at his stats were the two 20-plus goal seasons.

He was touted as a defensive-minded centre, a guy who was good in his own end… but you don’t score 20 goals without having good hands.

Still, most people thought putting him on the Sedins’ line was a little nuts.

Henrik was asked Tuesday if he was surprised to see Sutter playing on the wing with him and Daniel.

“I was a little surprised. He’s a guy who’s always been a centre. He played one year in junior maybe as a winger…”

Hank didn’t sound overly convinced that it would work. He did continue, saying after their first period with Sutter, things started to feel better and, “…in practice now for a couple of days it feels like the chemistry’s there.”

Sutter apparently wasn’t a fan of the doubters. Check out his goal.

Thoughts from the fans:

I wonder if Sutter was recently watching #BlueJays Baseball with this 2-0 goal for the #Canucks. Not bad for a 1st game with the Sedins.

Is the “Pirates could’ve used Sutter” joke being made? Cuz I thought of it but don’t wanna be repetitive. #Canucks #Pirates #NHLFaceOff

Keep that up Sutter! I hate your contract but if you keep doing that maybe I will start to accept you. #Canucks

4. The Sedins are getting younger

Both Henrik and Daniel Sedin were in the top-10 of the point scoring list last season, yet when TSN compiled a list of their top 50 players, they weren’t in it.

It’s nothing new for the twins, who don’t ever get the respect they deserve. Sure, everyone knows they’re great, but are they acknowledged as two of the most skilled players in the entire NHL?

Because that’s what they are.

The twins picked up where they left off last season – they were a dominant force against the Flames in the playoffs – only Wednesday night, they were putting the puck in the net.

Hank spoke about his goals on TSN 1040 Tuesday: “For me, 20 goals is a goal I’m trying to reach every year. That’s a good year for me. Last year I was close to that again.”

And he went to work in the game.

The Sedins finished the night with two goals and two assists between them, but it was this attempted play that reminded me how they’re the best playmakers in the league.

It didn’t work, and it ended up looking bad, but the way he skated to the right to make it look like he was passing there, and then passed against the grain in the completely opposite direction… if it had worked, it would have been the HON, the 1-V-1 champ, and it would’ve broken Twitter.

We focus mainly on the game in the SixPack, but the Canucks losing Frankie Corrado to Toronto was too big a story not to touch on.

There were a number of options Vancouver could’ve chosen to avoid putting him on waivers. They could have sent Ben Hutton down to Utica, even just temporarily until they put Chris Higgins on LTIR and could bring Hutton back. Matt Sekeres of TSN 1040 mentioned how Pittsburgh did something similar sending Olli Matta down with the intention of calling him up after their first game in order to retain other players.

Speaking to the media Tuesday, Benning was asked if the team thought about keeping Corrado as the eighth defenceman in Vancouver.

“Not really. We made the decision Frankie needed to keep developing as a player. That’s the decision we made.”

According to TSN 1040’s Dave Tomlinson, Corrado was more like 10th on the depth chart for Canucks defencemen.

Oh well, time to move on. After he was picked up by Toronto, Corrado told reporters he was crying tears of joy while hugging his grandma in the kitchen of her house.

So he’s happy. And we have Luca Sbisa, so we are too (read on, I’ll explain).

(Note: Thanks to Ryan Biech for the gifs in this post)

He’s going to make fans happy because of the jokes he inspires. Here’s one.

“So your total comes to $10.8 million over three years, @VanCanucks. How would you like to pay?” pic.twitter.com/OJaC4Bf4Cw

Now, if you’ve finally composed yourself after seeing that, I want to leave you with a happy thought.

We are OFFICIALLY the highest scoring team in the NHL! #Canucks

So they’re tied for first with the Sharks who also scored 5… it doesn’t matter.

Jim Benning currently looking in the mirror and kissing his muscles