A 2-1 win over the Rangers? No one saw this coming. Anyone who tells you they did should be tested for substances.

The Canucks just ended a five-game losing streak with a marginal win over a marginal Buffalo team.

They were supposed to be dominated, eaten alive, fed to the wolves by the New York Rangers. Canucks fans wouldn’t have even been upset.

The only Vancouver-positive notion anyone had all day was when Rangers’ beat writer Larry Brooks said New York’s record is not as good as it looks (18-7-3 before Wednesday). He said on TSN 1040 they’d been propped up by incredible goaltending from Henrik Lundqvist.

Either way, if the skaters don’t beat the Canucks, the goalie will, people thought.

Vancouver did nothing to change our minds through the first two periods. The possession chart after the first said it all. 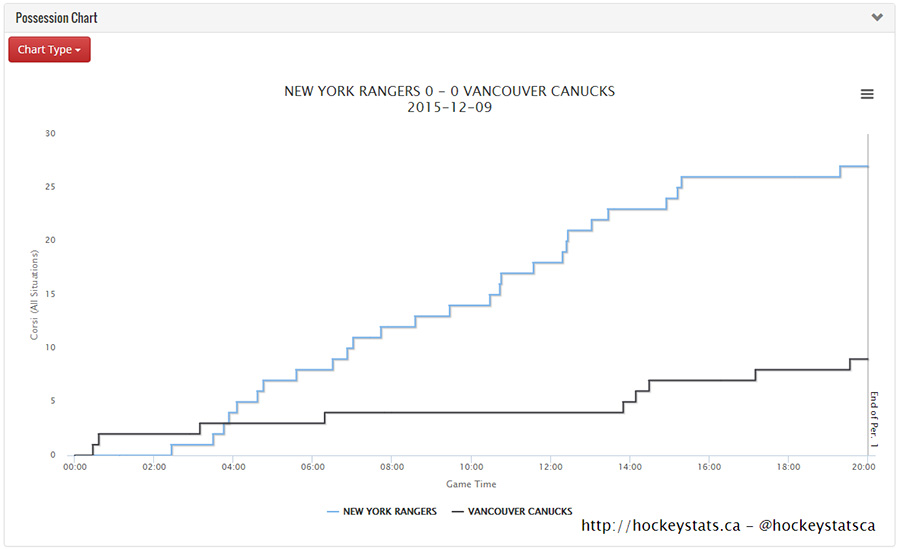 They were barely in the game. I asked Wyatt if he was on Provies duty today, and this was his answer.

@omarcanuck No, I have Sunday. Thank god I don’t have to recap tonight’s game. “Let’s break down the 18th turnover”

Then the third period happened and made us wish we had never bothered watching the first two.

1. The third period of the year

There are some moments, some stretches of play you remember long after a season is over. Wednesday’s third period will likely be one of those from this season.

It all started with Dominic Moore taking a penalty for hooking Henrik, and near chaos ensued.

A minute and a half later, Jarret Stoll lay on the puck in an attempt to keep it out of his net.

The refs were not impressed, giving New York another penalty – 5-on-3 Canucks, on which they scored. 1-0.

Less impressed (with the call on Stoll)? Alain Vigneault.

Even less impressed? The refs with AV’s clapping.

He took a penalty for doing it.

And if you thought the game would calm down from there (I admit I might have), you were wrong. A minute later Ryan McDonagh managed to take a penalty on Alex Burrows, which is as rare and hard as beating the Golden State Warriors.

No one takes penalties for doing things to Alex Burrows. A player could crosscheck him in the back and bite his ear and the ref would waved play on.

Turns out you can’t try to knock his head off his body.

Thought that was it for crazy sh**? Wrong again. Four minutes later, the Rangers were awarded a penalty shot when Chris Tanev covered the puck OUTSIDE his goalie’s crease.

Dan Boyle scored on the penalty shot, but on the very next shift, Daniel Sedin scored on what will be one of his best goals of the season.

What a re-direct. This puck was nowhere near the net, and he tipped it perfectly.

The third period drama didn’t end with Daniel’s goal, unfortunately. There was more, and it wasn’t fun for Canucks fans.

After a giveaway that reminded everyone of his troubled season so far, Hamhuis’s season went from bad to worse when he blocked a shot with his face.

No jokes about this one. Willie updated everyone after the game, saying Hamhuis lost some teeth, probably broke his jaw, and he’ll spend the night in hospital.

The Canucks won with one player on the positive side of the even strength corsi stats. One.

Those third period power plays were the reason the Canucks won. This is a bit lucky, but to give credit where it’s due – the Sedin-led power play looked amazing for a second game in a row. They were moving the puck quickly and efficiently, getting multiple shots on net, and making it look like a goal was inevitable.

Which is really something considering the way the PP was looking on those recent road trips.

One conclusion I draw from Wednesday’s Canucks-game programming – Sportsnet uses Luca Sbisa’s policy towards social media… meaning they only use the Internet to check emails and movie times.

That’s the only explanation I can think of.

Any time they so much as show a commercial with Mark Messier in it, Canucks fans go berserk.

That Messier-McDavid commercial… I’ve seen tweet after tweet about how nice it is that he irritates McDavid as much as he does Canucks fans. Many, if not most of them, are directed at Sportsnet’s Twitter account too.

So how Messier makes it on the first intermission panel during a Canucks game is beyond me.

Sportsnet really gets BC. They give us what we want to see. pic.twitter.com/pdaLoOLGPs

@omarcanuck my rage got the better of me. I’m off to go buy a new tv now

@omarcanuck like I want to gouge out my eardrums with chopsticks

Some had strong messages for Sportsnet (hint: they don’t care).

@omarcanuck IMHO, if they’re looking to reduce viewership? #Messier is the guy to put on your broadcast in Vancouver!!

And in the interest of balanced journalism, two who were on the other side.

@omarcanuck don’t really care to be honest. It’s been 16 years since he left

@omarcanuck Don’t care anymore. Was a long time ago. #getoverit

I actually kind of agree with the last two… I do think he’s bad on TV, though. And that commercial with McDavid – what kind of idiot thinks an ad showing Messier irritating the hell out of McDavid would make us want to buy a phone?

Before I finish on this one, any chance Messier’s plea makes you soften towards him?

Messier in int. “I had a great time in Van, very disappointed wasn’t able 2 win SC, nobody feels worse than me & my obligation 2 make happen

Earlier Wednesday, Radim Vrbata was on TSN 1040 radio. Blake Price mentioned he’s on pace for 27 goals after his hat trick Monday and asked if he’d have signed with Vancouver knowing he’d get 27.

“Oh for sure. Especially after the first six games where I couldn’t score on a soccer net.”

“It’s fun playing with them. It’s one of the main reasons I signed here, to have the chance to play with them, and I’m glad I did for half a season last year.” 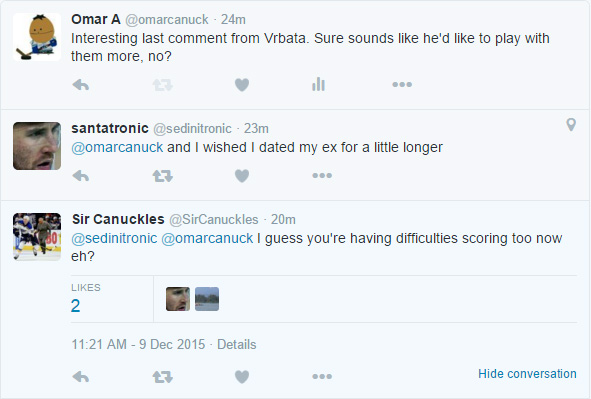 Since Vrbata was talking about the kids, thought I’d throw in this play by Hutton, which shows the promise he holds for the future of the team as an offensively skilled defenceman.

The sorcery used to pull that puck from the boards and get a great chance on net is beyond me. And it’s exciting.

Meanwhile down on the farm, Nick Jensen was doing this in the shootout.

Talk about sorcery. Jensen’s not done yet.

Note: Huge thanks to Ryan Biech who, as you can tell, worked overtime to help with the gifs in this one.