During Coach’s Corner, Don Cherry said hockey fans are going to love 3-on-3 overtime so much they’ll be cheering for the tie so they get to see it.

Crazy thing is they got to see it in the early game between the Senators and the Leafs, and near the end of the 2-2 Canucks game they found themselves cheering for it again.

Canucks fans may have been hoping for OT for another reason, though. That is they were dominated by Calgary in the third period and escaping this one with one point was a bit of a miracle.

Brandon Sutter summed up the 3-2 OT loss better than I can when he spoke with Cassie Campbell after the game:

“I thought tonight we had a good start, played well in the first half, and then our third period wasn’t very good and that kind of cost us.”

1. What happened behind the score

The winning team in any game or sport isn’t always the team that played the best. Bounces, luck, incredible goaltending, referees that hate Vancouver – all sorts of things come factor into the final outcome.

That’s where the fancy stats movement has come into the game of hockey. Corsi, Fenwick – all these measurements give us ways to see how teams and players are actually performing on the ice, because if we only look at goals and assists, we’re not seeing enough.

With that, I present the Canucks’ corsi chart for game two of the season (from hockeystats.ca). 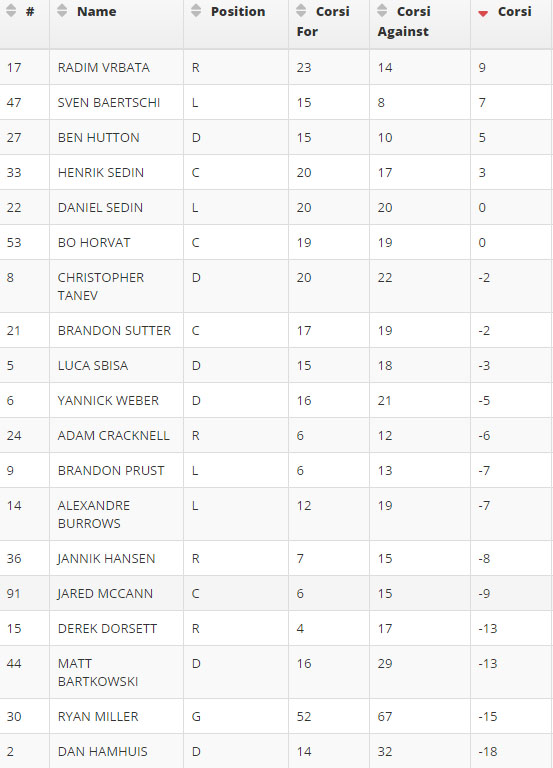 You don’t have to know what any of this even means to see that the numbers in the far right column don’t look good for the Canucks. That column shows how many of his team’s shots a player was on the ice for, minus how many shots against he was on for.

The Canucks had four players on the positive side of zero.

Looks like Sutter’s the main character of tonight’s SixPack… and this time it’s not good.

Here’s the play that cost Vancouver the game:

Play-by-play from a Canucks fan:

Sutter had his chance to be the hero – chip that puck to open ice and Daniel Sedin was off on a breakaway to win the game. Unfortunately Sutter didn’t quite get it to open ice, and you saw the result.

After Wednesday’s season opener, one part of Vancouver’s game had everyone talking.

No analyst – from Botchford to Gallagher to Tomlinson to Shorthouse to Ferraro – could stop singing it’s praises.

Think back to watching last year’s playoffs against the Flames. Remember that fear we had every third shift? The worry that something horrible was going to happen unless?

“I like their mobility. I like Bartkowski’s ability to get back, get the puck and transition it up ice, whether he makes the first pass or he skates it out, and Ben Hutton’s another guy who’s able to get the puck out.”

Yeah, they looked good, but one problem foreseen by many was a lack of defensive depth. Right before Saturday’s game, we found out Alex Edler was sick and wouldn’t be playing.

Take out half of the team’s top pairing, and what’s the result? See the Corsi numbers in part one of this article.

Jared McCann, aka McCannon, scored his first NHL goal, and it was something.

McCann said he almost blacked out after scoring

With his goal tonight Jared McCann joins this list of youngest players to tally their 1st ever goal with the #Canucks pic.twitter.com/STcZZfroTk

If that’s his shot at 19, before he develops it more, before he fills out and gets some more weight behind it… yikes. He may very well live up to that #91 he’s wearing.

McCann is making me forget about the Kesler trade. #Canucks #ducks #Flames

While we’re all hoping McCannon sticks with the team past nine games, here’s what Benning is saying: If McCann looks like he can handle the skill and size of the NHL and keep developing, we’ll keep him.

While there were a bunch of dark holes in the Canucks lineup Saturday, the team’s backbone could not be questioned for a second. They dominated the offensive end against the Flames as usual. Here’s one particularly magical play from them:

Skilled plays from them are predictable, though. Late in the second period, Daniel went off the board and took matters into his own hands against Brandon Bollig.

Daniel Sedin pulling a trick out of the Jarko Ruutu bag of tricks is the highlight of this game. pic.twitter.com/eRz5Jh9BW9

Either having Brandon Prust and Derek Dorsett on that fourth line really has made Daniel feel a foot taller, as Don Cherry would say, or this year he’s simply decided to take matters into his own hands and show people just how tough he and his brother really are.

As they do from time to time, the Tron Army (@TronArmy on Twitter) hosted another photoshap competition. If you don’t know what that means, you’ll get it soon enough.

The theme for this one was SNL, and the contenders delivered, maybe better than they ever have before. Don Falconer had a couple of highlight reel shaps:

But this from ZoSo… I mean… Pixar’s going to be calling him for animation tips soon.

Before you leave the SixPack, we’ll leave you with a positive thought:

Anyhoo, get Virtanen into the next game, Prust can sit a game, that fourth line doesn’t need to double down on middleweights.

Hopefully Big Willie feels the same and we get to see another rookie against L.A. on Monday.