It was the final game of the year for the Vancouver Canucks and they played like they wanted to forget 2015 ever happened, losing 5-0 to the Los Angeles Kings.

In what has become a tradition between these two teams, there was a lot of feeling in this one and it started early.

Henrik doesn't take opening face off, then McNabb nearly takes his face off… Could be a feisty affair… #Canuckson1040

More on that in a moment…

Unfortunately, the Canucks’ lack of talent and healthy bodies reared it’s ugly head once again making the last couple of wins against the Tampa Bay Lightning and Edmonton Oilers a distant memory.

Oh yeah, and Anze Kopitar had himself a game…

We’re through the looking glass people…

I need a Sixpack.

I have to admit that I completely forgot about tonight’s Canucks game starting with a tribute to five Canucks that have passed away over the past 20 years.

Here’s the video if you missed it:

Remembering the ones we lost.

Here's the tribute video that played in arena pre-game.https://t.co/sO77RqYM0Y

The video tribute is incredibly well done and extremely emotional. It was especially hard watching it and remembering how much joy Rick Rypien brought to the fans and what Luc Bourdon could have done for this franchise on defence.

It’s probably because the tribute caught me off-guard, but I did almost well-up a little seeing the highlights of all five former Canucks.

Not gonna lie I cried a little bit.

At least I’m not the only one.

The feelings in this game didn’t take too long to get going as Kings defenceman Braydon McNabb decked Henrik Sedin with an elbow to the head.

Or was it even a head-shot? Because the officials did not see it that way.

Not clear enough for you? Okay here’s a video:

Of course, the headshot by McNabb wasn’t called and Alex Biega received the extra penalty for sticking up for his captain.

I don’t really understand how the referees missed this. Even borderline hits are given at least two minutes but in this case, the refs had their whistles lodged firmly up their butts.

I could pull a John Garrett, get up onto my soap-box, and go on a rant about the standard of officiating in the NHL (not just against the Canucks), but I think Cheech pretty much covered it for me. There is absolutely no consistency. Probably because the officials are too busy looking for ticky-tac garbage hooking calls (which they never seem to miss) or delay of game penalties.

Because why concentrate on the plays and hits that cause injury?

Henrik – "I thought it was a flying elbow to the head. The only point of contact was my face." #Canucks

Biega on hit to Henrik – "I thought it was high and late. That can't happen to our best player." #Canucks

Upon hearing Biega call Henrik “our best player”, Daniel started to weep silently into the night.

#Canucks need to get Markstrom a 2nd goal. Guy gets no support
1 at LA
0 vs BOS
0 at PHI
1 thru 2 periods tonight at TB

It’s an older tweet but I can finish it up since I learned addition and subtraction when  I was in pre-school. Take that analytics!

The Canucks scored one more in Tampa Bay, two in Edmonton, and 0 tonight against the Kings.

It’s really a shame because although he hasn’t been perfect by any stretch of the imagination, Jacob Markstrom is actually playing very well. He just seems to be the victim of a terrible team in front of him.

Or I could just be comparing him to Ryan Miller who had been gradually getting worse before getting injured. 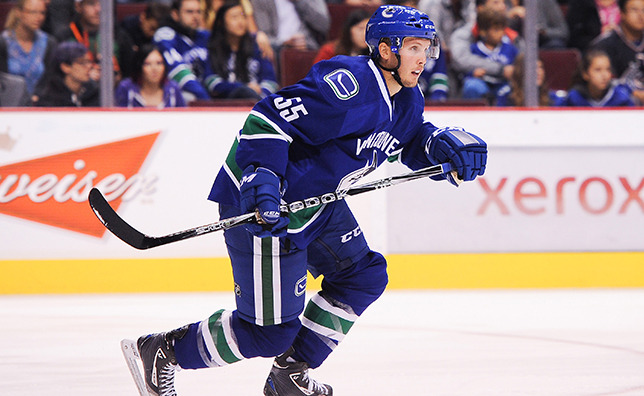 I honestly can’t remember what a healthy Canucks defence looks like. Oddly enough, I am enjoying it because we are getting to see a lot of different players that we normally wouldn’t have seen. This is one of the benefits of a non-playoff season, even if the Canucks’ brass don’t believe it yet.

But even when a couple of defenceman do make their inevitable return, how can the Canucks possibly send Alex Biega back to the Utica Comets (where he is the captain) with the way that he has played?

As Ian McIntyre said on the Sportsnet first intermission panel with Dan Murphy and emo-glasses Gary Valk, Biega is currently playing almost 18 minutes a night and never gives up on a shift. He is sticking up for his captain and creating opportunities.

#Canucks Weber getting buried in possession: -12 (1/13) already not even through one

INJURY UPDATE: Sven Baertschi will not return due to an upper body injury. #Canucks

Just when Baertschi was starting to click with Bo Horvat and Radim Vrbata, he gets hurt.

So…who is the latest Utica Comet to get an chance?

I can’t wait to see Hunter Shinkaruk back with the Canucks. He’s really going to elevate that fourth line with Adam Cracknell and Brandon Prust.

And speaking of injuries…

The revolving door of #Canucks injuries this season pic.twitter.com/S8k1h6kzUt

I’m starting to sound like a broken record, but I just can’t understand how being in a playoff spot is still a reality for this franchise. Injuries aside, this team just isn’t good enough.

the canucks are terrible/in a playoff spot

The worst part about this is that it’s giving the upper management of the Canucks the delusion that Vancouver has a chance to win the Stanley Cup because, as the theory goes, if you make it into the playoffs, you have a chance.

Except if you are the Canucks. You don’t have a chance in hell.

I’m just going to be over here watching Team USA at the World Juniors with Brock Boeser and Auston Matthews developing chemistry.

And dreaming. Lots and lots of dreaming.