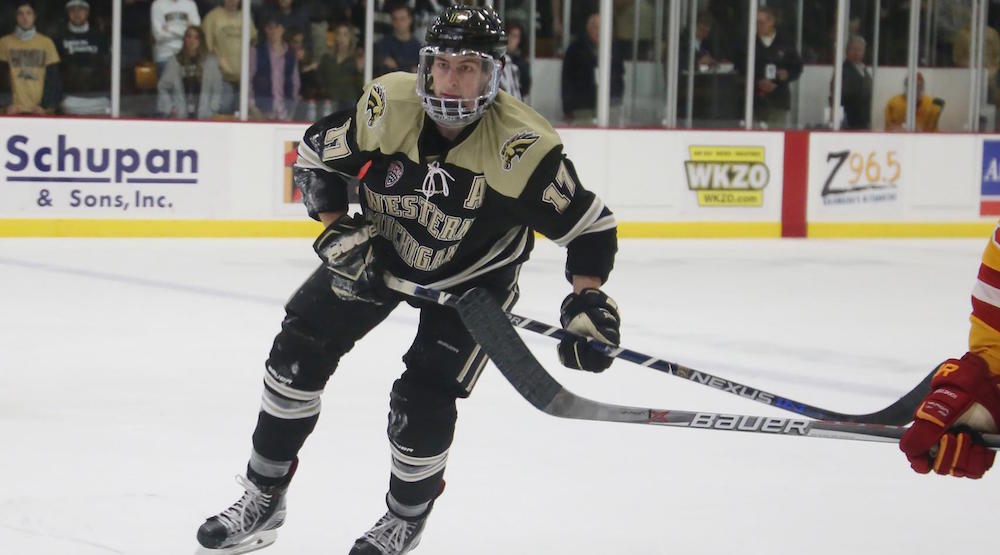 The Vancouver Canucks have reportedly added another young player to their prospect pool, as ESPN’s John Buccigross is reporting that free agent centre Griffen Molino will leave Western Michigan University to sign with the Canucks.

Hearing that Griffen Milino is leaving Western Michigan to sign with The @Canucks. He was an undrafted free agent pic.twitter.com/hYbjnq8ZWv

At age 23, Molino is older than your average college sophomore. Prior to attending Western Michigan, he played two seasons in the USHL, scoring 64 points in 57 games in his last season there as a 21-year-old.

Unlike most NCAA free agent signings with lengthy scouting reports all over the internet, information on Molino is spotty, to say the least.

Here’s a highlight pack from a four-goal game he had three years ago in the USHL (adjust your speaker volume for the very excited play-by-play announcer):

One of the few scouting reports I could find on Molino comes from Ben Kerr from Last Word on Hockey Prospects:

Molino is a solid skater, with good speed and acceleration as well as solid balance. He is a strong player in all three zones, battling for loose pucks. He is a committed backchecker who supports the defence down low. Molino generates offence through his speed, forcing defenders to back off or risk getting blown by. Molino also has a decent shot, with a good release.

For Canucks fans hoping Molino is a diamond in the rough, his age is the biggest warning sign for getting your hopes up. But perhaps Molino is simply a late bloomer, along the lines of Alex Burrows. It’s not probable, but it’s certainly possible.

Until then, Molino will be a player for fans to keep an eye on at training camp in September, and likely with the Utica Comets to begin next season.