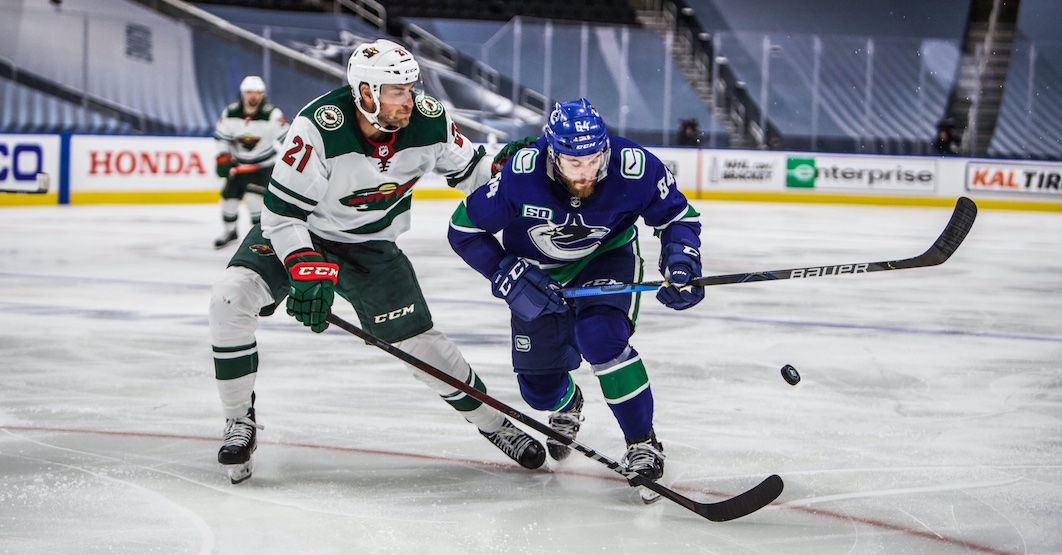 Well that didn’t go as planned.

The Vancouver Canucks played sloppy hockey in Game 1 of the Stanley Cup Qualifiers, getting shut out 3-0 by Alex Stalock and the Minnesota Wild.

Stalock recorded his first career playoff start with 28 saves, but didn’t have to make too many high-danger saves outside of a couple nice glove saves early on.

Sick Stalock snag in slo-mo. Toe up and everything. 🔥 pic.twitter.com/xKV9qiTtKO

Outside of the first line and the Hughes-Tanev pairing, the Canucks didn’t really generate much offence (only three high-danger chances in the game) and largely looked uncoordinated. There were countless missed passes and miscues that killed momentum and allowed the Wild to get play going the other way.

Like wtf are they even doing out there lol pic.twitter.com/vnUUZnkB5q

The Canucks even nullified their first power play chance of the game when they somehow ended up with seven players on the ice.

Jacob Markstrom had a nightmare start after Minnesota got an early power play and a Kevin Fiala point shot squeaked through his arm on the second Wild shot of the game.

But Markstrom dialed in after that, and made several big saves to keep the Canucks in the game.

Big response from Jacob Markstrom as he shuts the door on Eric Staal! 🙅‍♂️ #Canucks pic.twitter.com/UpTbA6rbZf

The Wild’s second goal was also on the power play, when Jared Spurgeon slid a shot five-hole on Markstrom in the second period.

Staal finds Spurgeon who gets the puck under Edler and Markstrom for the goal. #Canucks #mnwild pic.twitter.com/DyvY6t3OhG

While the first powerplay goal could be largely attributed to Markstrom, there was more blame to go around on the second.

#Canucks' Motte caught in no man's land on the PK for the second Minnesota goal pic.twitter.com/GUSeSONiBx

It's not often you beat two goalies five hole on the same goal pic.twitter.com/mqVfJ0lcRA

Markstrom took responsibility for his play, as he always does, following the game.

“Those two goals obviously you want them back,” said Markstrom. “Their goalie didn’t do any mistakes tonight and I did two.”

But it’s hard to point the finger at the goalie when the Canucks didn’t give him any help. Even a perfect Markstrom would have only gotten this game to overtime.

For many of the Canucks it was their first taste of playoff hockey, and Travis Green acknowledged that after the game.

“I wouldn’t call it a lesson, but they got some experience for sure.” Green said. “I think we probably had a few guys that were nervous, which is to be expected. Nervousness is excitement which is good as well. I don’t think we had everyone playing their best. We’ve done a good job of learning from games. I expect our team to be better next time.”

Green also gave his opponent credit for the job they did shutting down his team.

“They’re a good team, you’ve got to give them credit. They know how to defend. It felt like we spent a lot of time in their end. We didn’t get to the net enough… We’re probably going to have to do a better job of getting to the net if we want to score.”

It’ll be interesting to see if Green chooses to make any changes to the lineup. The Canucks have only mustered one goal in six periods since entering the bubble, and Jake Virtanen or Zack MacEwan might be able to provide a much-needed offensive boost. Loui Eriksson is also an option if Green wants a different look on a penalty kill that allowed two goals in Game 1.

Prior to the game starting, the anthem was sung by Canucks anthem singer Marie Hui through a video call, which was put up on the jumbotro.

Looks like @mariehui has taken over as the #Canucks' No. 1 anthem singer 🇨🇦 pic.twitter.com/77BkPfWXQ7

Matthew Dumba raised his fist during the national anthems to continue to show his support for the Black Lives Matter movement.

Matt Dumba raising a fist for the anthem tonight. pic.twitter.com/fgtMAhk5TH

Yesterday, Dumba made an inspiring speech and kneeled during the American anthem at the Oilers-Blackhawks game.

The Canucks will need to step on their performance against the Wild in Game 2 on Tuesday. Puck drops at 7:45 pm.