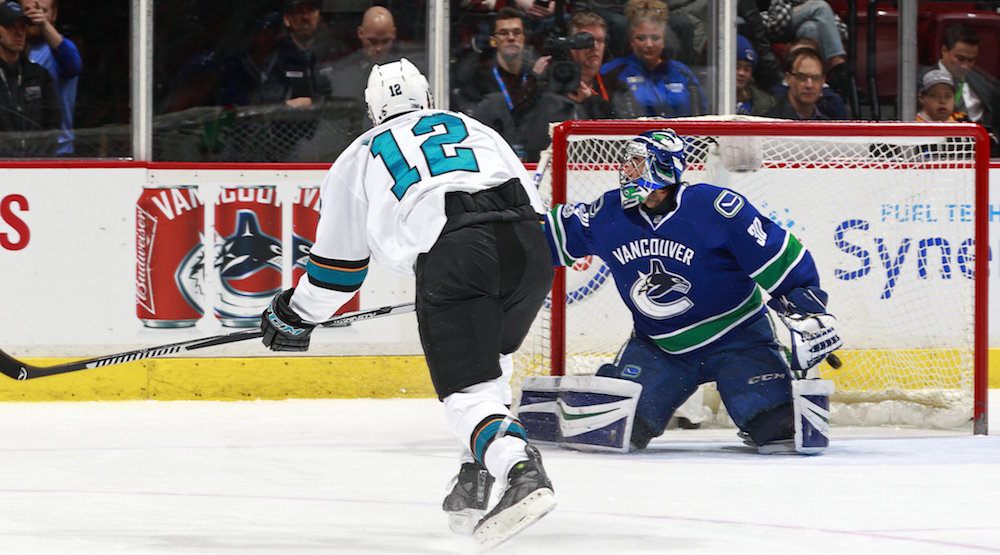 It was supposed to be a true battle of the titans.

The Sharks are 7-0-1 over their last 8 games overall. #Canucks

#Canucks are looking to extend their point streak on home ice to 9 games. They’re 7-0-1 in the last 8 at @RogersArena.

Course, you had to ignore annoying facts like these.

That and the fact the Sharks are an elite team while Vancouver’s hoping to sneak into the playoffs with ~85 points.

Reading this quote from Philip Larsen, Vancouver’s players may actually have ignored facts like those.

“They came out on another level than we were. We were shocked. We got better as the game went on, but it was too late.” – Larsen

The Sharks went to the Stanley Cup Final last year and you’re shocked they play at another level?

Gotta appreciate the honesty, I guess.

San Jose could’ve had two or three more goals with their glorious chances in the first 10 minutes, and Vancouver could’ve had a couple more on great Sedin and Horvat-line shifts in the rest of the game.

But sadly, the result was no surprise.

A lot of stuff happened, though, so let’s talk about it.

The Sedins have had many games where they haven’t looked like themselves this year. Blame what you want – age, Sutter, Megna – they’re all good reasons for the struggles.

This is why it was so noticeable how good the Sedins and Eriksson looked against the Sharks Thursday.

They had two or three old-school shifts where they cycled the pucks for longer than a minute. They also had rushes like this one.

The Sedins also looked good on the power play, and they really only lacked a finisher (I won’t go off on Sutter being on that unit today, but you know what I’m thinking).

Back to that gif of Loui’s chance above – the problem with Eriksson’s had playing with the twins this season has been that he doesn’t offer the speed Hansen does to help them with break-outs and gaining the zone.

Against the Sharks, they were noticeably able to gain the zone better when they had Edler and Stecher passing the puck to them. Notice Stech’s pass above.

The Canucks may have lost, but this is a win.

It’s taken a long time for us to get here, guys. Horvat started the season on the fourth line, don’t forget. All it took for Willie to see him as a scorer – a trip to the NHL All-Star Game.

The Horvat line was completely deserving of all that ice time too. Near the end of the second period, they had a shift that had us thinking Sedinery though the Sedins had nothing to do with it. It looked like a Sedin shift – they had the puck for nearly two minutes in the Sharks end, they cycled, Burrows nearly scored… it was magic.

Later, Horvat turned on those nearly league’s fastest skater jets to catch up to this puck.

Let’s ignore the timbits hockey player impersonation once he had it… it happens.

Anyway, turns out Horvat has other things going for him besides his game. 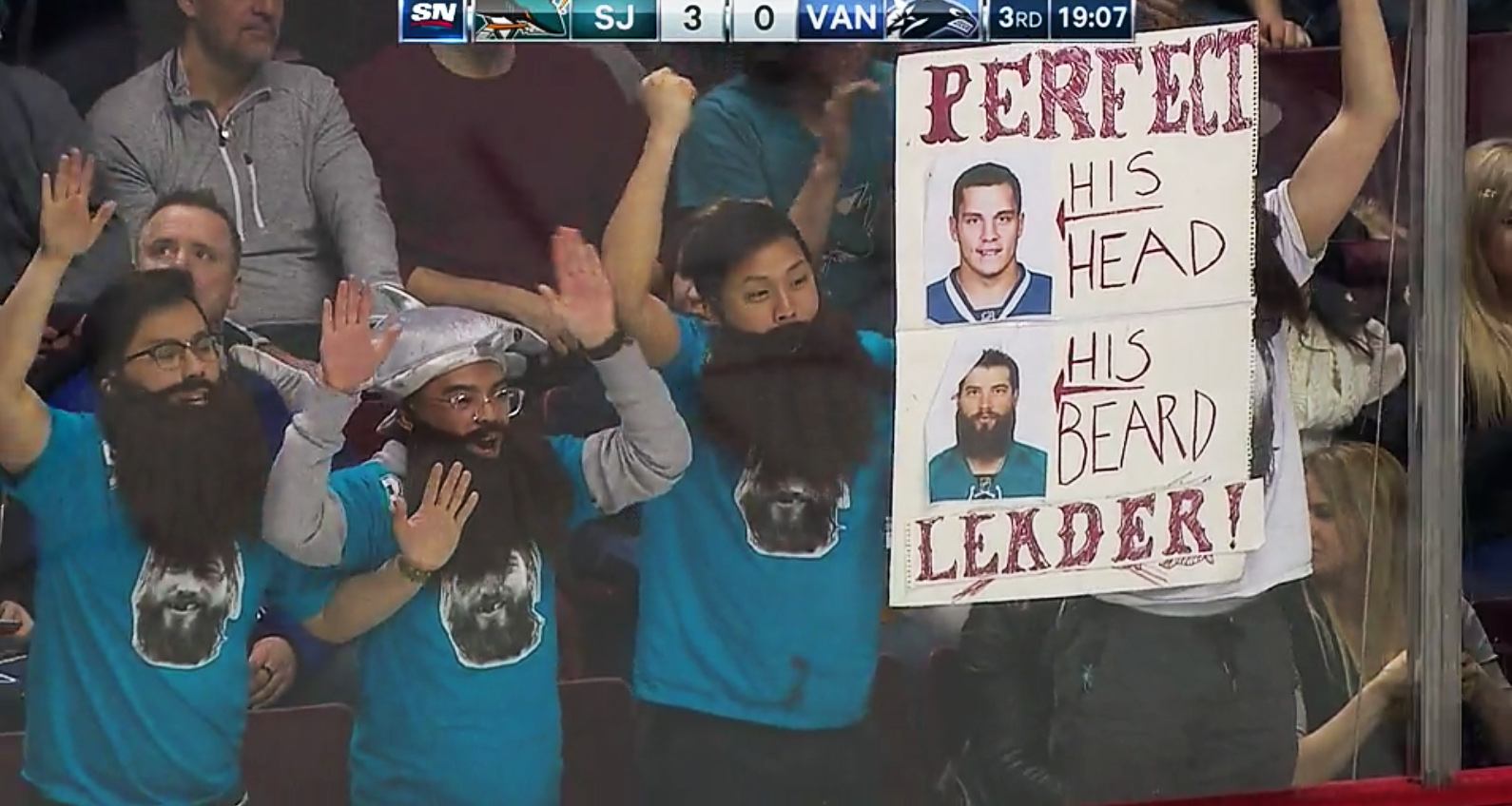 If this was over your head, you’re not alone. Apparently Horvat’s head shape is a thing (thanks to @Haida_Canuck for pointing this out to me).

Burns doesn’t want us looking at his beard, btw.

Just when you think you’ve got Willie’s “trust” figured out, Larsen comes back and throws you for a loop.

By that, I mean Willie has shown time and time again he prefers players who are good in their own end. He didn’t trust Rodin, he doesn’t trust Boucher. He took a while to start trusting Tryamkin.

Larsen on the other hand – he’s not great defensively, yet he’s been given opportunities all season.

And here he is on San Jose’s second goal.

Larsen’s the one letting Tierney do as he pleases in front of the net, btw.

Harsh? You know it’s bad when Clay gets negative on you. (Clay is the most positive person in the world).

Someone please name one good thing that Larsen does for the #Canucks.

You also know Clay has divine powers when Larsen responds with Vancouver’s only goal of the game.

This angle provided by Ryan’s gif shows the kind of bounces and screens it took for Vancouver to score on the Sharks.

Jim Benning spoke on TSN 1040 Tuesday, and he was asked if Tryamkin reminds him of Chara. Benning’s response:

“Nikita, for a big man his mobility is better than Chara’s at the same age. He’s real coordinated for his size.

Chara, it took some time. He played a couple years in Junior and he played a year or two in the American league for it to all come together – the coordination for his size. Nikita already has that.

Chara was mean when he played in the Western hockey league … there was a meanness about him. Some games we see that from Nikita where he’s physical and he wants to play mean, but we need to see that on a more consistent basis.”

Not one to downplay his young players, Benning went all in on the Chara comparisons.

Crazy? Check out these gifs.

Here, Tryamkin was nearly leading the rush with a partial breakaway if Burr just gave him a half-decent pass.

And here, he picks Tierney’s pocket and turns the flow of play around, as if he’s a giant version of Troy Stecher.

So yeah, maybe the Chara comparison’s not completely ridiculous?

The Sharks’ fourth goal was called off due to goalie interference.

Crazy stuff – a player can’t screen a goalie anymore without it being called off? Ridiculous! said I and many others on Twitter.

Then it went to video review, and the call was overturned.

Good call, that sucks, we concluded.

In Linden and Benning’s first couple of years in charge, you could say they were a little out of touch with the fans in Vancouver.

While most wanted the team to undergo a more aggressive rebuild, they went with the “quick retool” option. While many fans were critical of cap-eating signings such as the Sbisa, Dorsett, Sutter deals, Benning talked about them as if they’d save the team.

With that in mind, it’s interesting to hear how they’re talking now.

Think they don’t know most of you would rather have a high-end draft pick than an early playoff exit? Benning had an answer ready for that (also on his radio hit on Tuesday).

“This draft, there’s not the high profile guys, the Matthews, Laine, McDavid, but I think the depth of the draft and the skill level – I think we could still make the playoffs and get a good player.”

Think they’re blissfully ignorant of the Willie criticism? This answer tells me no.

“Willie’s players have always played hard for him. They’ve never ever quit on him … Willie’s a competitive guy and he’s not a quitter and he’s going to keep doing what he needs to do to get this team where he needs to get it.”

And think they’re not thinking about how they’ve traded away draft picks the last couple years?

Thing is, despite Summer Summits and Town Halls where fans were able to speak directly to them, they never cared what fans were saying in the past. Think they really do now?

So who’s the one making them think so hard about all these things?

I was at Dice & Ice on Tuesday for Daily Hive and I had a chance to speak with a few players. A couple stories stuck with me, but I’ll share this one today.

I asked Eriksson if it was hard for him, coming to a new city where there’s a lot of scrutiny and starting the season without scoring in over 10 games. (If you recall, we didn’t hear from him at the time and it seemed like he was taking it in stride.)

His response: “Actually it was 14 games. That’s never happened to me before.”

Think it wasn’t bugging him at the time? 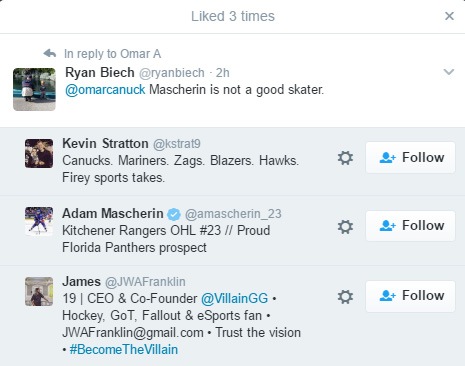 Hopefully he’ll be motivated and end up like Horvat?

Note: Thanks to Ryan Biech for always helping with the gifs in the SixPack