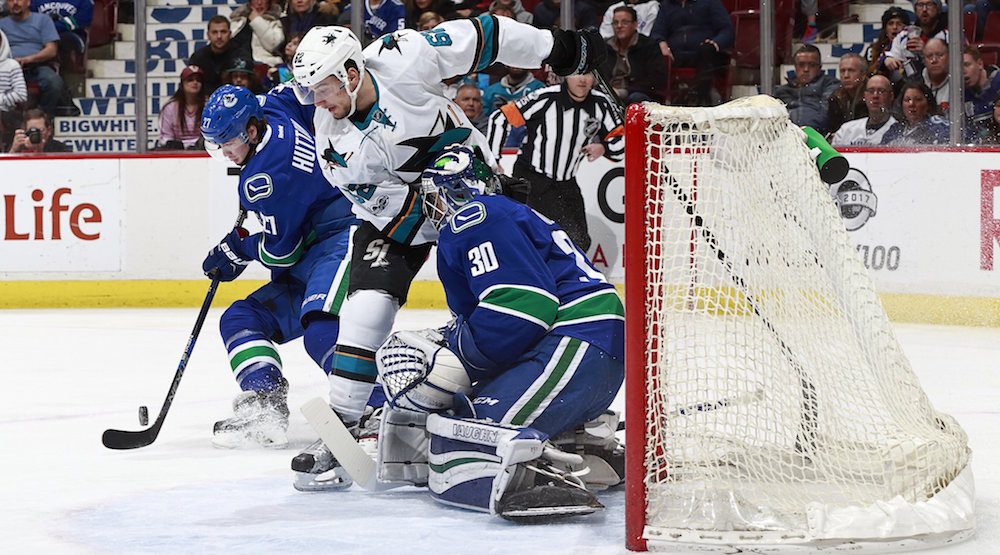 Well, that was… Interesting?

Saturday night’s game between the Canucks and Sharks is not one that you’ll tell your grandchildren about one day. Heck, it might not be one that you mention tomorrow.

It started off ok though. With five players watching from their sick bed, and another one joining them midway through the game (more on that later), the Vancouver Comets looked pretty decent.

Remember those days when the #Canucks could just show up, be average, and still outscore their mistakes? That would be the #SJSharks tonight

Not enough to do much damage on the scoreboard of course though. The Sharks, who are a better team in every way, beat the Canucks 4-1.

The Canucks are now nine points back of a playoff spot with 21 games to go, if you’re still keeping track.

Sharks fans in attendance enjoyed it…

@RobTheHockeyGuy you sure it wasn't tank nation?

…they were Sharks fans, weren’t they?

Ok, let’s get them out of the way early.

I don’t know why everyone finds the mumps so funny, they just do. Maybe it’s the name?

Anyway, it’s the illness that was made for Twitter:

If this mumps outbreak leads to the Canucks getting Nolan Patrick, his nickname 100% needs to be The Cure.

anybody know the record of teams with the mumps coming off the #NHL bye week?

Doomsday alarmists were all around before this game began.

I predicted 5-1 San Jose beforehand. Vancouver was the biggest longshot in the NHL on a busy Saturday schedule.

The final score ended up lopsided, but it was competitive.

The Canucks, in fact, came out guns-a-blazin’.

That’s a case of a rusty Sharks team, who like Vancouver, were coming off a bye week. You’d expect the Canucks to be sleepy to start too, if not for the fact that they were probably scared of getting blown out.

A little bit of fear factor combined with an overconfident and rusty Sharks team resulted in a 6-0 shots advantage for the Canucks in the first five minutes. After one period, the shots were 14-8 for the home team.

The Canucks actually outshot the Sharks by a wide margin, 36-26.

3. Malfunction at the junction

Fresh sheet, all to himself.

Evan McEneny, playing in his first NHL game, got a bit of a rude awakening on San Jose’s first goal of the night.

He and Alex Edler had a mixup at the bench, which led to the goal by Tomas Hertl.

The rookie might get the blame by some, but I lean more towards Edler.

Edler jumps on the ice, then turns to go back off. Once McEneny sees Edler come on, his focus has to be to get to the bench as quick as possible.

Instead, the d-men were like a couple of awkward/passive people trying to pass each other in a narrow hallway. “You go ahead. No, I’ll go. No, you go… Aww hell.”

A trio of Utica Comets got into the lineup tonight because of mump mania.

For me, Joseph Labate was the most noticeable.

He had a good hit in the first five minutes of the game, and he obliterated Melker Karlsson on this hit:

Labate had to answer the bell against a pretty tough customer in Brenden Dillon, and fared pretty well.

The fight was the first by a Canucks player since December 13.

.@Canucks when can we buy Labate shirseys?

The Canucks had a new look to their power play tonight, and *gasp* it actually looked good. 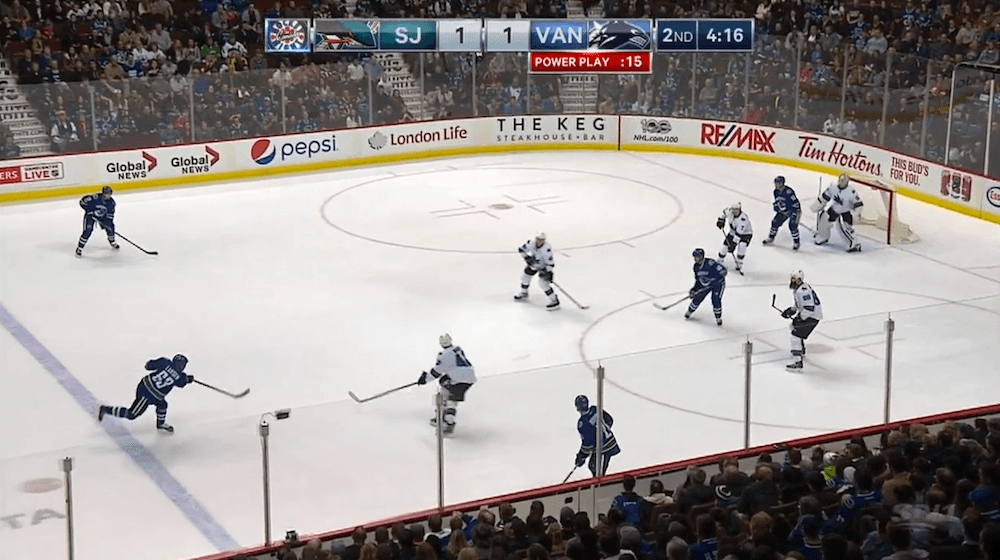 Vancouver had a two-layered screen in front of Sharks goalie Martin Jones, and it created a lot more deflections and rebounds than we’re used to seeing from the Canucks’ man advantage.

Sutter returned to the top unit and had a couple of nice deflections on their first power play.

On Vancouver’s second try, Bo Horvat had a glorious chance off a rebound created in part because of the screen, but sailed the puck over the net.

It took them long enough, but the Canucks mmmmiiiiiiiight just have a half decent solution for their 5-on-4 opportunities going forward.

It wasn’t all great on the power play of course…

With Wednesday’s trade deadline just days away, it can feel like the games are almost secondary at this point.

And when players get removed from the game, it makes you wonder…

UPDATE: Sbisa will not return to the game due to the stomach flu.

Elliotte Friedman and Nick Kypreos shared some tidbits during the second intermission of the early broadcast of Hockey Night in Canada, concerning a couple of trade chips the Canucks have at their disposal.

Burrows has a hefty contract and a full no-trade clause, but it sounds like he’ll waive it. The Canucks can hold back salary too.

Friedman also indicated that strong-arm tactics won’t be used in this deal by the Canucks, who understandably want to be respectful to a player who has been the heart and soul of the franchise for a decade.

The other player mentioned during the intermission? Ryan Miller.

It’s beginning to sound like the idea of moving Miller isn’t as farfetched as many once thought. Kypreos reported that the LA Kings are interested in Tampa Bay’s Ben Bishop or Miller.

Miller has a limited no-trade clause, and the three Californian teams are on his list of five teams.

You’d have to think the price tag would be a lot lower for Miller than Bishop, and thus, the 36-year-old Canucks goalie would be the more likely option for LA. Stay tuned.

Note: Thanks to the gif master, Ryan Biech, for the gifs used in this article.