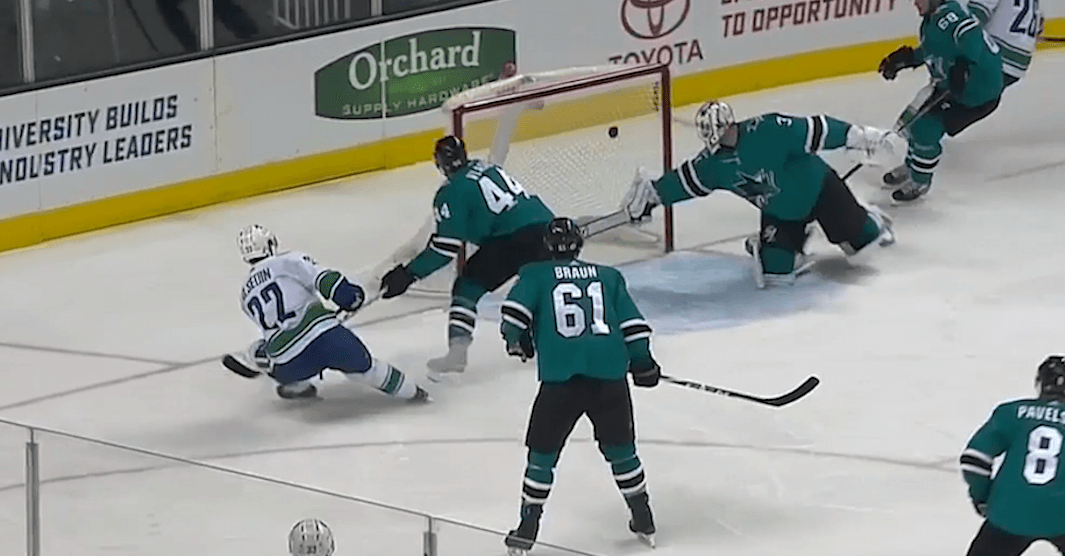 That was all I was able to utter out of my mouth as Daniel Sedin scored in the third period against the San Jose Sharks.

Who cares that the Vancouver Canucks were still down a pair of goals afterwards, and would go on to lose 4-1 to the Sharks – that goal was sexy.

I just hope it doesn’t make Jim Benning want to re-sign Thomas Vanek. The Canucks need all the future assets they can get.

For a team that traveled to San Jose after playing in Vancouver the night prior, I thought the Canucks had a good effort on Thursday, albeit after a slow start.

Despite the 4-1 loss, they put 44 shots on goal and it could’ve been much closer if not for the stellar play of Sharks netminder Martin Jones.

But there was no way he was stopping that Sedin goal.

It was the kind of goal Canucks fans have seen countless times over the last decade.

These days they seem harder to come by, but the Sedin twins and Thomas Vanek scored one of the nicest goals this team has had all season.

That pretty passing play had the defenders guessing more than me watching an episode of Jeopardy.

Seriously, who knows the answers to any of those questions?

There was some anger and confusion among fans on Twitter when it was announced Sven Baertschi would be a healthy scratch for the first time this season.

While I don’t mind Travis Green making this call – I think Baertschi hasn’t been playing very well of late despite four points in his last four games.

It isn’t all about points, and Baertschi did have a costly turnover the night before against Florida that turned the tide against the Canucks.

Though I don’t think Baertschi’s play has been good enough to keep him from being a healthy scratch, you could say the same for more than a handful of Canuck regulars this season. The most prolific of them all, of course, is the $6 million dollar man.

Many were quick to point that out, too.

If you're going to send a message about bringing it every night, why scratch Baertschi who has 4 points in his last 4 games? Why not scratch the 6 million dollar man who seems invisible on most nights #Canucks

Sven Baertschi gets the scratch for the #Canucks tonight. Nikolay Goldobin is in. Here's the question: at what point does Loui Eriksson get the same treatment? He's pointless in his last 6 games and has 1 pt in his last 9 games.

Eriksson has been worse than Baertschi, and even though Travis Green has said the contract isn’t a factor, I’m not sure I buy that.

Fans quickly had more fuel to add to the fire, as Eriksson was caught doing… well, not sure what he was doing here, but he lost the puck in a terrible spot and forced the Canucks into a too many men penalty.

So if the contract isn’t a factor, why does Green keep Eriksson in the lineup every game?

had many asking why Baertschi and not Eriksson? I don't make the decisions. I know Green was asked Tuesday to defend Eriksson's season. He said he doesn't look at a player's salary & then pointed to his work as a lead PK'er

Penalty killing. Got it.

I’ve been vocal in previous SixPacks about my support for Darren Archibald as an NHL player. He hits, he kills penalties, and he’s got pretty good vision for a fourth liner.

Not sure if Nic Dowd was injured or Travis Green just didn’t like how he was playing, but many of his minutes ended up going to Bo Horvat late in the game.

His 20:42 of ice time against the Sharks was a full four minutes more than any other Canucks forward, and trailed only Alex Edler and Erik Gudbranson (yeah, I’m not sure either) among all Canucks on the night.

Of those minutes, 18:56 was spent at even strength. It seems Green has moved Horvat off the penalty kill (only 41 seconds of PK time this game), and the Canucks only had one power play in the game so he didn’t get much time there either.

We’ve seen Horvat logging big minutes all season, but he seems to be getting even more in the last few games. Five of his last six games have been above the 20 minute mark.

Not sure if someone slipped something extra into Daniel’s breakfast Thursday morning, but he seemed to have a chip on his shoulder all game.

He finished the game with the team’s only goal, and was all over the score sheet with six shots and, surprisingly, five hits!

They weren’t just phantom hits either, he was taking some serious runs at guys.

The impact of those hits a bit of a letdown, but the effort was there.

And that goal was so sweet, let’s look at it one last time.