Today’s the day that die-hards and bandwagonners come together and embrace the game of hockey in its most beautiful, bloody, tense and sweaty form: the playoffs.

A lot of fans’ hope began to die with the Canucks ever since the Game 7 loss to Boston two years ago, and it was absolutely crushed after L.A.’s Jarret Stoll popped a wrister past Schneider to end the teams chances early in 2012.

But when you take into consideration that this team has been playing its best hockey, consistently broken franchise records, and is a constant cup contender all in the past five or six years, you have to take this over the years where even a goaltending controversy would involve the names of Garth Snow, or Manny Legace.

Fans, we’ve got it good, so lets sit at the edges of our seats and capture the stories that this team will bring us this spring. No matter what, this team entertains, whether through its frustrations or its successes, and this year will definitely not be an exception.

The setting for these stories for the next two weeks will take place against the San Jose Sharks. Let’s talk matchup.

Luongo to start instead of Cory Schneider due to an ongoing undisclosed injury.

Who are the Sharks?

While they’re a lot less scary than the fishes they’re named after, the addition of Raffi Torres counts as an extra set of teeth.

The Sharks are placed at the 6th seed, but could have easily been higher up had it not been for the stellar performance from Californian rivals, the Anaheim Ducks and L.A. Kings. Much like the Canucks, San Jose has long been a contender for the cup, but so far they’ve been all talk and no real game. Strong special teams, an elite cup-winning goaltender, and the towering shoulders (and slashing stick) of Joe Thornton, have remained this year, giving the Sharks the ability to still reach the shining hill that is the finals, or even a cup itself.

This season the Sharks have also been undefeated against the Canucks, leading many to wonder who the real underdog is, despite the Vancouver squad claiming home ice advantage. Not to worry though, as a number of factors calm the situation. The Canucks only lost one game outright in a clear loss, lost another by a slim margin in a tight game, and the last one was a shootout – I think we can sleep at night just fine., especially when those games were played when the Canucks were short on centres, had forced the Sedins to play defensive hockey, and Ryan Kesler and Derek Roy were far away from being in the lineup.

How do we beat the Sharks?

The Sharks claim great depth in their roster, and have two impressive scoring lines lead by Logan Couture, Patrick Marleau, and Joe Pavelski.

The real two areas that need to be focused on, are in goaltending, and special teams. The Sharks boast Antti Niemi, who backstopped the Blackhawks to the Stanley Cup in 2010, and has put on a stellar performance in 2013. His 24 wins lead the league, and his .924 save percentage and 2.16 goals against average are three stats that prove his ability, and himself as a major obstacle for the Canucks. In special teams, the Sharks have had a 20.1% success rate on the power play, and a scary 85% rate on the penalty kill. The Canucks have long had a depressing power play, and a penalty kill made of swiss cheese, but ever since Roy and Kesler joined the team, the Canucks have had a great special teams stretch.

To win, the Canucks need to elevate their power play enough that any chance they get, has the ability to put them up ahead. The penalty kill will also need leadership from Ryan Kesler to push back against the charge lead by Marleau, Pavelski and co.

Most importantly, all three key areas in our scoring, goaltending, and defense need to step up against this team that has great depth. The Canucks’ top two lines should be devoted to scoring, and the best has to be brought out by the Sedins, Burrows, Kesler, and Roy. Not to mention the fact that players like Chris Higgins and Mason Raymond need to bring back the scoring performance they showed early on this year. The defense needs to be as stingy as it looks on paper, and not laughably emulative of the play of Cam Barker of late. Edler, Hamhuis, and Bieksa essentially have to play to level that their million dollar contracts demand, and shut the back door tight closed. In goaltending, of course two players are still in the conversation.

Roberto Luongo gets the start  in this game 1, but unless he stands on his head and makes NHL.com’s First Star, Cory Schneider will probably pick up the role in games 2-4, and then some. Schneider has simply shown a Vezina-contending pace in the last half of the season, and is easily the reason that this team still has home ice advantage in the playoffs. As much as the Canucks may get frustrated trying to beat Niemi, the Sharks should expect the same feeling the other way around.

How can the Sharks beat us?

Just because the Canucks are the higher seed, it can’t be assumed that they’ll move past this round.

The Sharks can get past the Canucks for the first time in their matchup history if they stick to their guns, and kill all their penalties and score on their power plays. The Canucks are faster and more tactical, but the special teams ability of the Sharks can kill them all over some hooking or high sticking call that comes at the exact wrong time for Vancouver.

Goaltending is again the next key area that the Canucks can be stopped in. We’ve seen routs and high scores against Schneider and Luongo at an equal level, and a mental breakdown could bring that around once again. If either goaltender fails to stand on their head, then the Sharks could find a way to move on to the second round.

Finally, if the Sharks realize that Alex Edler hands you the puck if you skate behind him near your own blueline, we’re screwed.

And now, the details of game one.

This first game could go either way between the Pacific coast teams, so expect a real chess match between Vigneault and Sharks coach Todd McLellan. Both teams haven’t been too hot coming into the postseason, so it’s even harder to predict where this will go. And with Roberto Luongo in net in this first game due to an undisclosed injury for Schneider, who knows what will happen. To calmn your nerves, my sources tell me they’re 99% sure Nail Yakupov is not dressing up for the Sharks. 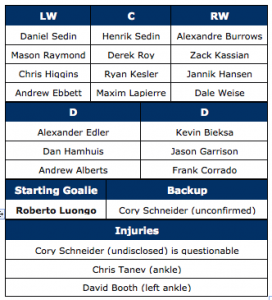 Finally, to get you pumped up, here’s Bhavin Solanki’s incredible video.

We also want you to predict the score. Comment below!

Vyas Saran is Vancity Buzz’s Canucks Columnist. Follow him throughout the playoffs here, and at @vyassaran.