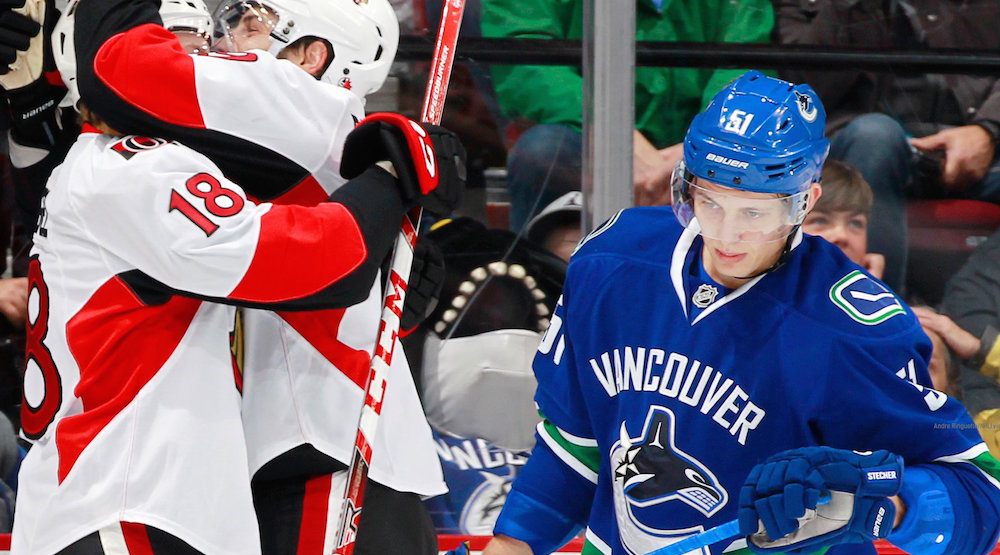 Troy Stecher played his first game as a Canuck and he was amazing.

Other than that, the positives were few and far between, as Vancouver lost 3-0 to Ottawa on Tuesday.

Yes, the Canucks still have a 4-2-1 record, but being shutout by the Sens – who’d given up at least 3 goals in each of their first five games – that replaces a lot of good vibes with memories of how 2015-16 felt.

Some fans felt ok after the game.

@omarcanuck I’m great. But then again, I can’t watch the game. So….

The ones who watched, not so much.

Awe the Canucks punked us with those wins .. back to normal

And for some it took two regulation losses for the train to get rolling again.

@omarcanuck #Canucks are Rollin for Nolan

The Canucks were atrocious to start the game, going down 1-0 in the first period. They played hard in the second, making it look like they might have another comeback in them.

And then the third came along. Oh, they were in it, and they fought, but sloppy defensive plays did them in, and this time they couldn’t pull off the miracle.

One person who doesn’t deserve the blame – Ryan Miller. Hard to spot this in real time, but it was a hell of a save on a rebound puck batted out of mid-air by Mark Stone.

Course, Miller let his teammates know they weren’t helping him.

“They were hard on the puck and we didn’t make the adjustments needed. We have to be ready for that.” – Miller

Tell us how you really feel, Ryan?

Yep, that’s from Sunday’s game. Chances are he was even angrier after this one.

Can you blame him?

1. Stech Curry (the MVP) has arrived

Elliotte Friedman wrote this about Troy Stecher in his 30 thoughts earlier Tuesday:

Hopefully, he’s allowed to breathe, make his mistakes, and grow. There’s so much hype, so fast. The best attribute he’s shown in the AHL? He knows his physical limitations and is smart enough to understand how to defend despite them. Very competitive and very intelligent.

Friedman’s right – there was so much hype for the hometown kid. How would Stecher respond to all the pressure?

First, he was two seconds shy of leading all Canucks in ice time at 22:35. In his first game in the NHL. 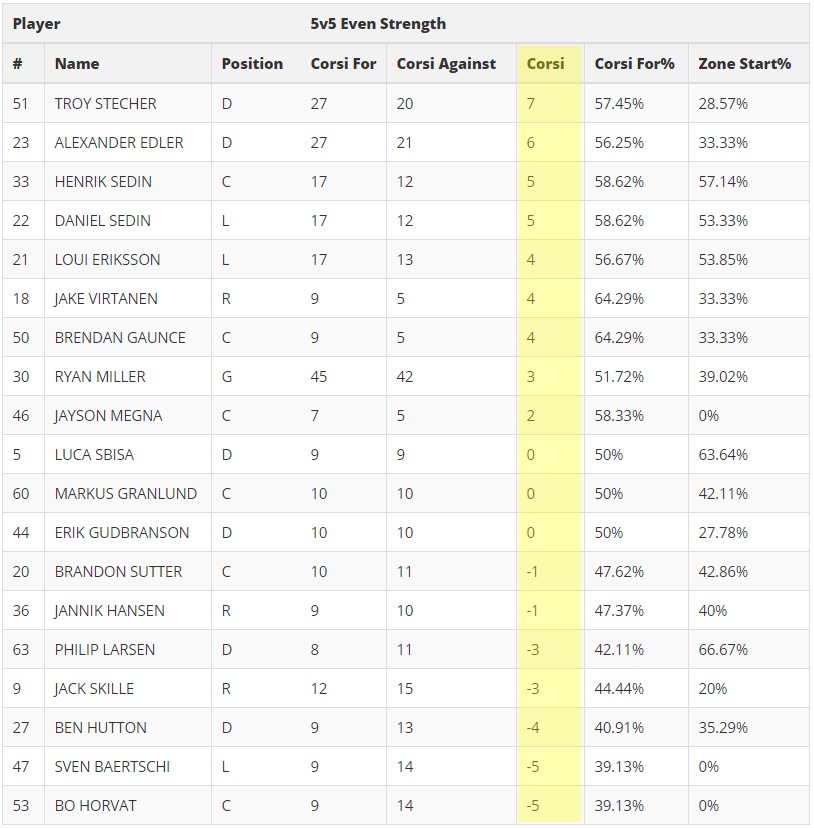 He led all Canucks in shot attempt differential. Making it more impressive, the only defencemen who was on the ice for more defensive draws than Stecher was Erik Gudbranson, meaning he started most of his shifts in front of Miller and ended them in front of Anderson.

Stech Curry did so many impressive things. There were a couple of fake shots that got him open, like this.

And near the end of the first period, with Edler in the box and the teams playing 4-on-4, Stecher and Hutton were on the ice together. It was a glimpse into what the future holds for Vancouver’s defence.

It was dynamic, exciting, and full of potential, and it made you wonder – why do we have to wait?

Stecher was dynamic at the offensive end.

Know what else he was good at? Defence.

Meanwhile Luca Sbisa and Philip Larsen were not.

According to Willie D’s comments from earlier Tuesday, Chris Tanev’s only out for about three games, so what happens when he comes back?

Can the Canucks really keep one of their best defencemen out?

To keep Sbisa and Larsen in the lineup?

To keep Tryamkin from going back to Russia?

To make 100% sure Biega doesn’t get claimed off waivers if they try to send him to Utica, even though chances are slim he gets claimed?

Tell you one thing – Stecher will help their chances of winning, while Sbisa and Larsen playing together are hurting them.

The gap between that subtraction and addition is huge.

Sekeres to Stecher on TSN 1040 Tuesday: “You feel a little taller next to Pedan (his defensive partner in Utica), don’t you?”

Jake Virtanen hit Tom Pyatt awkwardly near the end of the second period.

Fans wondered if he’d re-injured his shoulder, and if he’d been playing semi-injured all along.

Turns out, it was just an awkward hit. After the game, TSN 1040’s Dave Tomlinson reported Virtanen was “hit in the nether regions” with a stick.

Also, when I looked into the stats to “prove” Virtanen’s playing without the edge we’re used to seeing from him, I was surprised to see he’s fourth on the team in hits, below only Sbisa, Edler, and Dorsett – this despite that he’s been scratched for two games already.

Remember how word came out late last season that Canucks’ veterans (the Sedins) were not impressed by the entitled attitude of some of the younger players (Virtanen and McCann)?

With Nikita Tryamkin showing up for the season not in game-ready shape, and refusing to go to Utica for even a conditioning stint, don’t you wonder how his teammates are feeling about him?

Time for Little Niki to grow up a little….take a conditioning assignment and prove you are a better option than someone else.. pic.twitter.com/lzQE5LsToA

Friedman added to the story in his 30 thoughts:

[Tryamkin] has admitted he made a mistake by showing up out of shape. That disappointed the Canucks who were counting on him after he showed real promise in last season’s 13-game NHL debut. The club wanted him to stay in B.C. all summer, but he needed to go home for legitimate personal reasons…

There is an agreement in his contract that says he can go back to Russia if the Canucks want to send him to the AHL, and he remains steadfast on that point. GM Jim Benning did try to negotiate a deal with Tryamkin’s KHL club, that the player could go back as long as he’d return if Vancouver needed him, but that was a non-starter for Yekaterinburg. So, he’s practicing to get in shape…

Speaking about Tryamkin earlier Tuesday, Willie D said he’s still on “the program”. Asked if he could play now, Willie D said he probably could, but they’d like him to keep working to get in shape.

Iain MacIntyre and Garry Valk also spoke about Tryamkin between periods during the game:

MacIntyre: “They would love for him to go down and play in Utica, not necessarily for 2 months or even 2 weeks. They’d just like him to go and get some games. For whatever reason Tryamkin, within his contractual rights, is saying, ‘No, I’m not going to play in the AHL,’ so for now it’s a standoff.”

While I was pouring over game stats, analyzing players, tallying scoring chances, and enlightening fans with my illuminating tweets, our editor was also working hard.

They do look like they’re focused on solving one of the world’s great unsolvable mysteries here, don’t they?

That being the choice between the Legendary Combo and Chicken Strips, of course.

(It’s a tough one, believe me)

Note: Thanks to Ryan and Wyatt for helping with the gifs in this post